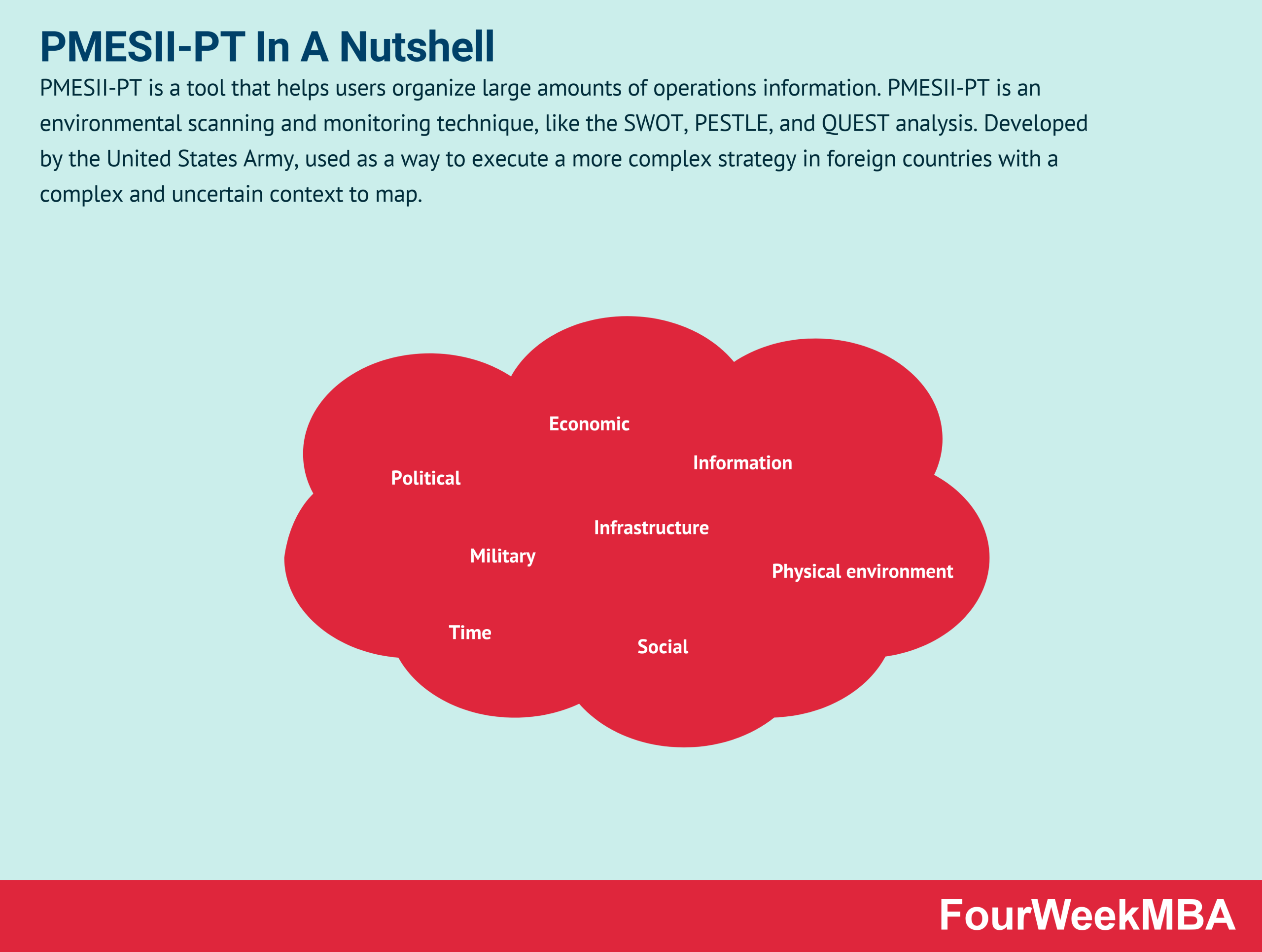 PMESII-PT is a tool that helps users organize large amounts of operations information. PMESII-PT is an environmental scanning and monitoring technique, like the SWOT, PESTLE, and QUEST analysis. Developed by the United States Army, used as a way to execute a more complex strategy in foreign countries with a complex and uncertain context to map.

PMESII-PT was developed by the United States Army as means of executing strategy in foreign countries with high complexity and uncertainty. This enables soldiers to analyze and then describe the conditions of their operating environment according to a mix of variables.

Ultimately, soldiers who use PMESII-PT become adaptive, flexible, and versatile decision-makers who rapidly respond to change. Businesses can also use this tool to examine the variables of the environment they operate in.

The six operational variables of PMESII-PT

According to PMESII-PT, there are eight mutually connected operational variables:

This describes the political power, structure, and hierarchy within the operational environment (OE). Power may be divided among government or state institutions who exert their influence over tax and trade policy and general political stability.

At the organizational level, power means the ability to make decisions. Who holds ultimate sway over the direction of the company? Are there any unwritten or unofficial leaders?

Military describes the capabilities of all relevant actors (enemy, friendly, or neutral) within the OE.

What are the strengths and weaknesses of rival businesses? Can the weaknesses be exploited?

Who are the allies or threats to organizational success? Are there neutral relationships a business needs to nurture?

This encompasses the behavior of individuals or groups toward the production, distribution, or consumption of resources.

Do illegal economic activities exist within the OE? What is the nature of the banking system? What is the basis of the economy? In other words, it is based on technology, manufacturing, or agriculture?

On the micro-level, economic variables include the location of the business, mandated minimum wage, and local employment competition to name a few.

What is the ethnic, cultural, or religious composition of the operating environment? What are the associated beliefs, values, and customers of society members?

Cultural and religious background can impact organizational procedures and processes. Does the business model gel with the social norms in a community? For example, an abattoir business may be unable to operate in a predominantly Hindu society where cows are considered sacred.

The information variable describes the nature, scope, and effects of those who collect, process, disseminate, or act on information.

What is the role of the media? Is access to information free and unrestricted? How will the actions of the organization influence media reporting and subsequent public opinion?

Infrastructure describes the facilities or services that sustain the functioning of a community or society.

In business, infrastructure might describe research and development, technological capability, and IT operations. It also describes resources key to business operations, such as electricity, water, transportation, and a capable workforce.

On the macro level, the physical environment describes the climate, weather, and geography of the operating environment.

But it also describes man-made structures. How is the business integrated with the community it serves? Is it located in an area receiving high foot traffic? Does it have a highly visible bricks-and-mortar presence or is it entirely online?

For example, do business hours reflect the needs of the target audience? How can the business take advantage of holidays, major events, or sales periods such as Black Friday?