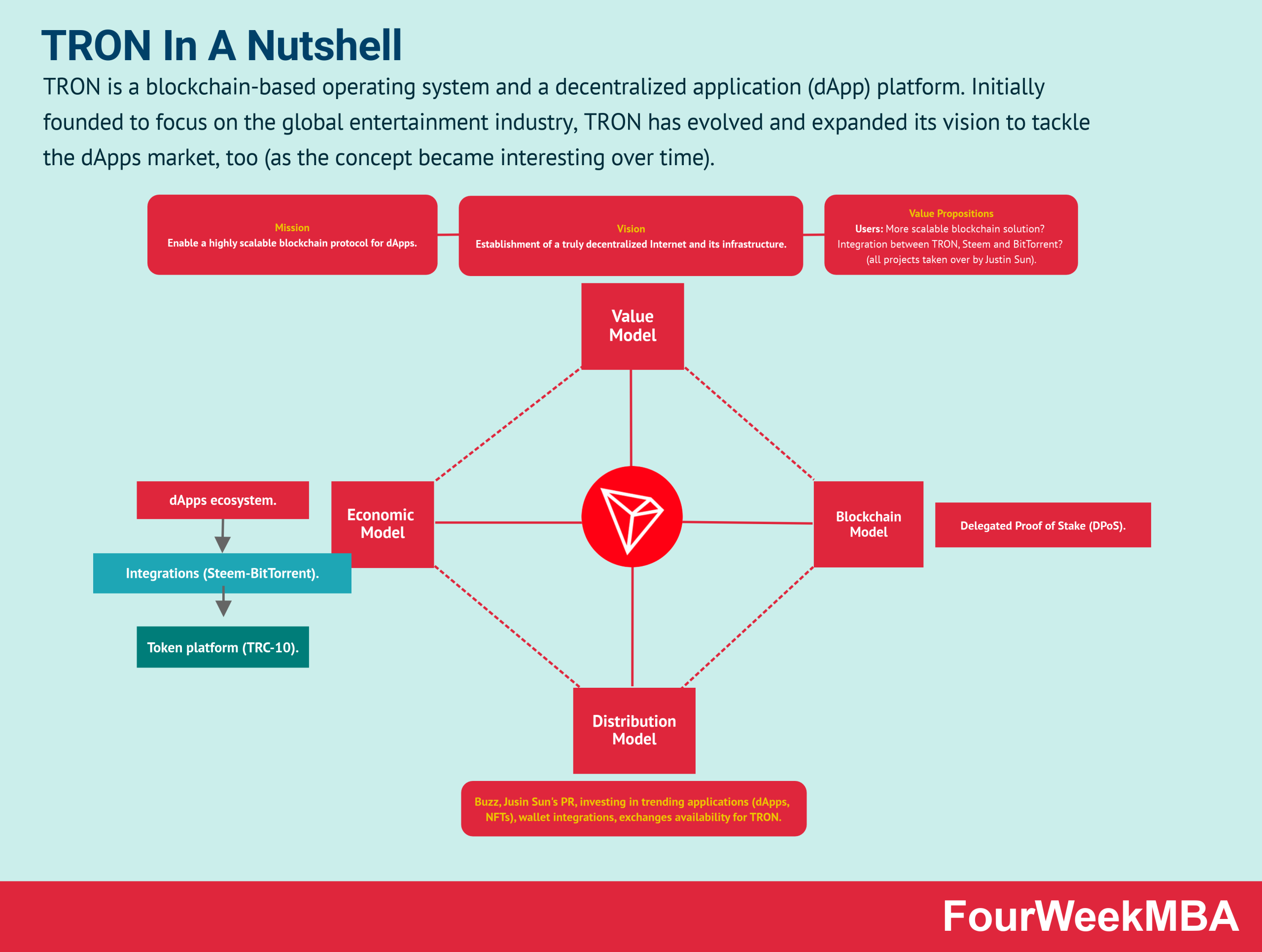 TRON is a blockchain-based operating system and a decentralized application (dApp) platform. Initially founded to focus on the global entertainment industry, TRON has evolved and expanded its vision to tackle the dApps market, too (as the concept became interesting over time).

Among the most recent technologies, TRON started through a non-profit, Singapore-based foundation in 2017.

Essentially, TRON is a blockchain-based operating system and a decentralized application (dApp) platform. Initially founded to focus on the global entertainment industry, TRON has evolved and expanded its vision to tackle the dApps market, too (as the concept became interesting over time).

The people behind TRON’s inception have made it clear in the platform’s initial white paper that they are followers of Tim Berners-Lee, the World Wide Web founder. As followers of Tim Berners-Lee, with a claimed objective to create an open, decentralized, and distributed storage technology, which content producers can acquire funds directly from consumers, eliminating the need to go through middlemen such as Apple Store and Google Play Store.

Although giant corporations like Google, Facebook, and Amazon, to name a few, still have control over a lot of user data and traffic, TRON claims and aims to take the control out of these giants’ hands and return it where it rightfully belongs —in the hands of content producers and creators.

Yet as we saw in the Steemit take over, Justin Sun, didn’t seem like embracing the whole spirit around how blockchain business models should really work, and also when looking at the TRON Network about page it’s clear that is still too much centered around his character. This is a recurring theme of the book. Many successful protocols, even with the mission of decentralizing the web, still present themselves in a corporate communication style fashion, where the leader is presented in an apocryphal way. While this might be normal (for how much we can trust technology at scale, as humans we feel we need to trust other humans) to a certain extent, the cult of leadership in the blockchain, as it presents itself as a revolution, is still very strong. With that in mind let’s look at TRON and whether it offers anything interesting to the ecosystem.

As highlighted in its White Paper, “TRON is an ambitious project dedicated to the establishment of a truly decentralized Internet and its infrastructure.”

With a mission to achieve that by enabling a highly scalable blockchain protocol.

TRON has always been big when it comes to its goals and ambitions (in line with Justin Sun’s marketing strategy). So what makes TRON valuable? One of TRON’s offerings is called the Exodus phase. Although Exodus makes no use of blockchain technology, the free platform utilizes a web-based file system protocol that makes it suitable for peer-to-peer distribution and content storage. The Exodus phase concluded in December 2018. In January 2019, the next phase of TRON’s project, called the Odyssey, commenced. Contrary to the Exodus phase, Odyssey leveraged the power of blockchain and encouraged the creation and hosting of content on TRON by giving out monetary incentives. These incentives base themselves on a “tipping” plan wherein incentives will be based on user interaction and engagement with the content, specifically how good users perceive the content. Furthermore, the subsequent set, two phases, the Great Voyage, which started in mid-2020, and Apollo, set to begin by mid-2021, will somewhat be similar to Ethereum-based application platforms. More specifically, these phases will allow content producers and creators to establish their brands, issue individual coin offerings (ICO), and even create and issue personal tokens.

Moreover, TRON should launch two further phases called Star Trek, which will begin by mid-2023 and Eternity by late-2025. These additional phases will allow participants to create their decentralized gaming and predictive markets platform. With these advances, Users can also raise funds for certain causes through TRON.

As TRON launched back in 2017, in the course of 2018, it was accused of partly plagiarizing the Ethereum code. Although it might have evolved over time, let’s see how its blockchain model works.

TRON blockchain protocol is primarily based on a Delegated Proof of Stake (DPoS) mechanism, where “transactions broadcast through the network are grouped together into nascent blocks for miner confirmation.”

And it is further unravelled as  “the confirmation process involves hashing transactions using cryptographic hashing algorithms until a merkle root has been reached, creating a merkle tree.”

In terms of applications, TRON differs significantly from other cryptocurrencies in existence. TRON aims to tackle the governing data privacy and centralization regulations of the entire internet that distributes them into a few prominent companies. To help TRON bring the goal of mitigating a few major companies’ control over a lot of user information, Tronix supports the entire foundation in monetary resources. Additionally, TRX began monetizing all content on the internet to reap the rewards and incentives accordingly. In essence, TRON targets eradicating access to people’s data by getting rid of advertisements on social media.

TRON Timeline, as per its White Paper

TRON has a 3-layer architecture divided into Storage Layer (distributed storage protocol consisting of Block Storage and State Storage), Core Layer (comprising modules such as smart contracts, account management, and consensus), and Application Layer (which supports a diverse range of DApps and customized wallets on TRON).

TRON’s main consensus mechanism is Delegated Proof of Stake, thus a variation of Proof of Stake, where 27 Super Representatives (SRs) produce blocks for the network. These 27 SRs are selected each six hours among the top lists of potential representatives picked by TRX (the token) holders. As pointed out in the White Paper, SRs’ accounts are normal accounts, but their accumulation of votes allows them to produce blocks.

Launched in October 2020, Filecoin protocol is based on a “useful work” consensus, where the miners are rewarded as they...