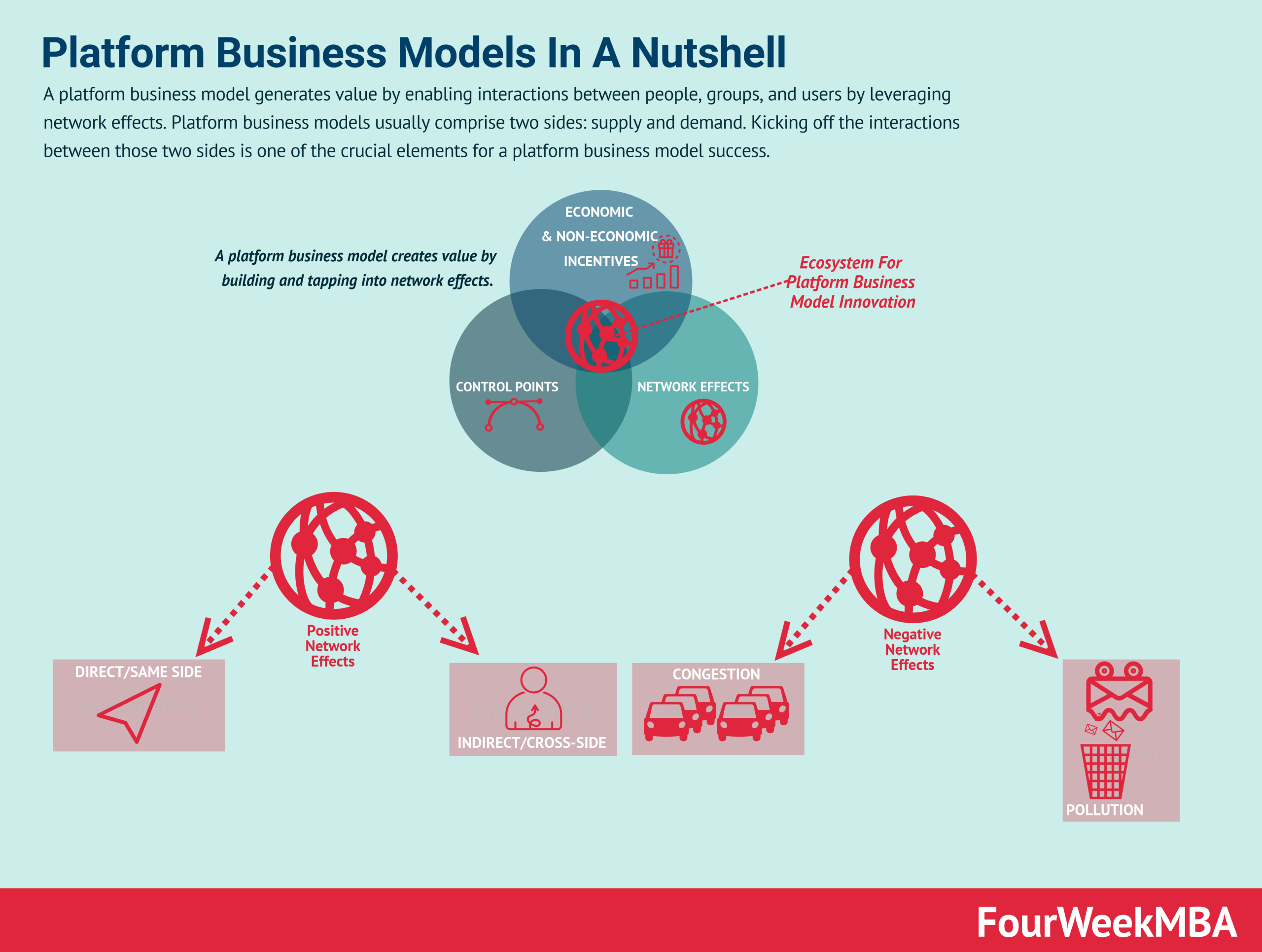 From products to interactions

In a platform business model, an organization moves from offering a product to creating an ecosystem for those interactions to take place. This shift is critical to understand how platforms work, as often those don’t require any capital or physical inventory.

The classic example is of Airbnb having among the broadest variety of homes around the globe, yet owning none of them. Often those interactions are on-demand thus if I’m looking for a driver I might access my Uber or Lyft mobile app to find the driver that can give me a lift.

From connections to transactions

A platform also makes it easy for people to transact. For instance, if I get to Amazon, I will find a variety of products, anything from books to music, apparel, and more.

Amazon Flywheel or Virtuous Cycle enables third-party stores to feature their inventory within Amazon fulfillment centers that become part of programs like Amazon Prime, which makes them eligible for one-day delivery.

That makes it extremely easy to transact on those platforms, and the experience needs to be so smooth so that customers can have a great experience and sellers, which usually are small businesses, can benefit from Amazon‘s economies of scale.

From customers to network effects

A two-sided marketplace benefiting from network effects also need to leverage on other key elements:

When building up a platform business model, it’s important also to know its limitations as it scales in usage and size. Negative network effects can cause the platform to lose value, quickly.

The chicken and egg strategy problem

Before the network’s effect kick in, it takes momentum which can be built “artificially” by bringing in the “chicken” that will allow the platform to take off.

In the Amazon Flywheel Model, before Amazon would become the tech giant we know today, it needed to broaden the variety of goods available in its store if it wanted to dominate the marketplace.

Rather than wait for Amazon to build up that variety, Amazon Virtuous Cycle made it possible for third-party sellers, which at the time were also Amazon competitors, to offer their products on the platform.

That solved the chicken and egg problem. As more sellers meant more variety, which was something customers valued a lot. That variety improved the customer experience which in turn made Amazon speed up its growth and take advantage of network effects!

Beyond technology and into business model innovation

One of the greatest misconceptions of platforms is that technology is all that matters for its success. However, a platform is, first of all, a business model and as such to avoid failure, in the long run, one has to be able to build a distinctive business model that makes it hard to copy. Therefore, business model innovation is another key ingredient.

There isn’t a single way to classify platform business models. Those, indeed, can be classified in several ways. For instance, based on the kind of interactions that the platform creates, but also on the type of relationships those same platforms nurture, or with a functional approach.

Thus, if we use these three classification methodologies, we’ll come up with different platform business models.

For the sake of this analysis we’ll take into account the three approaches:

According to Applico platform business models can be divided into exchange platforms and maker platforms. The primary difference is in the kind of interactions those platforms allow.

An exchange platform allows a one-to-one platform, where two sides interact as smoothly as possible. Some examples are Airbnb, Amazon, and Dropbox. In this kind of interaction, the two parts are made to transact based on supply and demand.

A maker platform allows an interaction one-to-many. In short, a creator connects with her audience. For instance, an app developer on the Apple Store can get many downloads, just like an author on Amazon Kindle can allow its community to purchase an info-product.

John Hagel, in The Power of Platforms – Deloitte University Press, 2015 divides the platform business models into four primary categories based on the kind of relationships they generate.

We move from a transactional platform where the parts are made to transact as smoothly as possible, to platforms that instead nurture mobilization:

Mobilization platforms take a step further, and they don’t just allow people to form relationships based on interests but to take actions together. And learning platforms that aim is to facilitate learning, but also insights exchange.

In The Rise of the Platform Enterprise Peter C. Evans and Annabelle Gawer platform business models are divided into:

The course of platform business models

One of the most successful business models of this era has been the “platform business model” or a company that managed to nurture an ecosystem, and as such, it captured economic value in the form of transaction fees.

However, as these platforms have scaled, they became the major centralizers. This became apparent as some of these same platforms’ changed policies had the ability to influence and negatively impact hundreds of small businesses across the world.

Thus, while the web digitized information thus creating “information superhighways” speeding up communication across the globe, and in the first wave, enabling anyone to become a medium. It did almost nothing when it came to governance, money, and decentralization at scale.

Companies like Google did try in the early day’s different governance models, like perhaps holacracy – for at least the engineering team (where the power to make important decisions is decentralized and distributed). Yet, over the years as the company grew it first organized in functional departments, then more hierarchical. Some small departments (especially those involved in developing innovative products) might still be flatter, yet no denying how Google (and the rest of the tech giants) have turned into more centralized organizations.

For instance, if we look at companies like Google or Facebook, those created business ecosystems, but from a governance perspective, they are still companies owned by a few major shareholders. Larry Page and Sergey Brin still owned more than 74% of the company’s stock, as of 2020, and they exercised a voting power of more than 50%.

This means that while those companies do have complex decisional organisms (boards, management) when it comes to the strategic decisions to potentially move a whole business ecosystem those are still in the hands of two people. The same applies to all the other major tech giants, with no exceptions.

Therefore, while the web innovated at the information level (which we might argue is only the tip of the iceberg in terms of real potential impact) it leveraged the old way of doing business when it came to governance.

Once again, if you run a small or medium business, being in charge of it, and deciding its direction it’s legitimate and indeed it might not cause harm at a collective level. However, when a company turns into a platform and then a business ecosystem, the governance structure skewed in the hands of one or a few individuals doesn’t work anymore, as it becomes a “business tyranny.”

This is also where Blockchain Technologies and Protocols might help. As they propose a new form of governance based – as we’ll see – on decentralized autonomous organizations at scale. This sort of governance might be extremely useful, especially when a whole business ecosystem needs to be governed.

Therefore, this new monster, which is the giant business-tech platform that becomes the sole decision-maker of where the whole ecosystem should go, might be the largest failure and most dangerous aspect for society overall.

It’s important to stress out that the Blockchain (intended as the set of protocols and applications that in the coming decades will form a “whole” just like the Web did) might become a new layer built on top of the Internet, which embraces everything from money to governance!

However, just like the web turned out to be eventually centralized by a few key players, the main risk for the Blockchain Ecosystem is to end up as a centralized entity. That is why it’s critical to follow its evolution, as any technology at scale follows a sort of balance and push and pull from centralization and decentralization.

When I use the term “Blockchain” out of the context of a single protocol, I’m referring to the set of protocols and applications that will form the whole ecosystem and that will be an additional layer on top of the Web. This layer will bring three major forces centered around decentralization at scale to form decentralized autonomous organizations, and decentralized autonomous applications to disintermediate decision-making at scale. Those might embrace anything from information to payments and governance. Thus, its use case won’t just be potentially a few trillion-dollar, but in the order of magnitude of quadrillions.