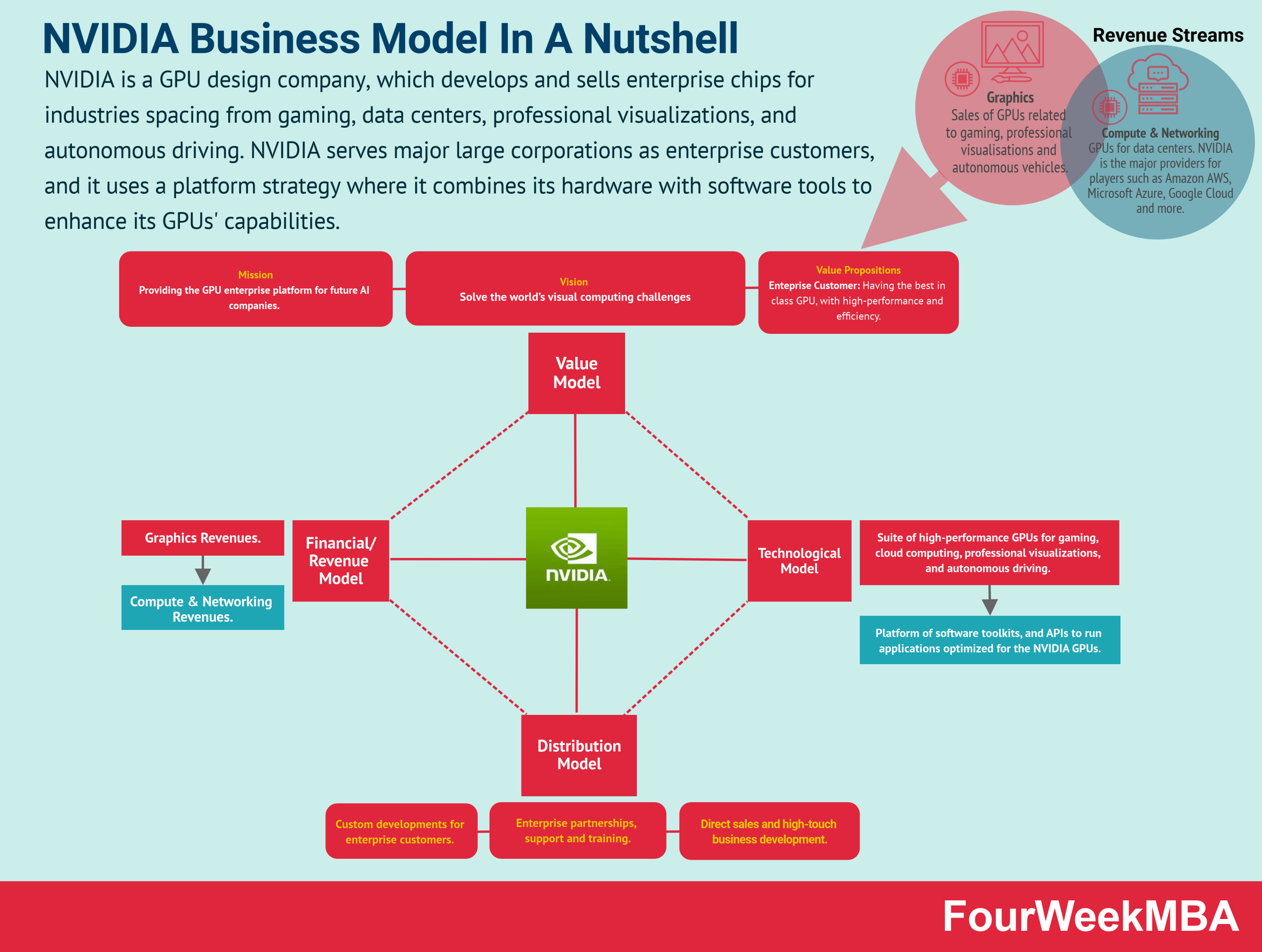 NVIDIA is a GPU design company, which develops and sells enterprise chips for industries spacing from gaming, data centers, professional visualizations, and autonomous driving. NVIDIA serves major large corporations as enterprise customers, and it uses a platform strategy where it combines its hardware with software tools to enhance its GPUs’ capabilities.

By 2006, NVIDIA launched CUDA, a general purpose programming model. This accelerated the development of applications for various industries, from aerospace, bio-science research, mechanical and fluid simulations, and energy exploration.

Started with a focus on PC graphics, NVIDIA has been the leader in the GPU space. Nowadays the company focuses on 3D graphics due to the exponential growth in the gaming market. At the same time, NVIDIA also represents the physical platform of entire industries. From scientific computing, artificial intelligence, AI, data science, autonomous vehicles, AV, robotics, augmented and virtual reality, NVIDIA really gives us an understanding of how tomorrow’s industries will evolve based also on the physical capabilities offered by its chips.

While GPU was initially applied primarily to gaming. Over the years, it became increasingly relevant to run AI/ML algorithms that required massive computing power. Thus, GPU has become the basis for the most promising industries of this decade: AI, autonomous driving, robotics, AR/VR and more.

While NVIDIA is a GPU design company, it has been following a platform strategy. In short, it has leveraged hardware, and software (with its stack made of algorithms, and libraries) with the ability to serve several industries, and a few other promising industries of the future.

As NVIDIA highlights, its vision is to “solve the world’s visual computing challenges.”

As they further specify:

“We make unique contributions to solving some of the world’s most stimulating technology problems – in industries ranging from gaming to scientific exploration.”

NVIDIA serves various enterprise industries, as such it has multi-faceted value propositions depending on the customer profile and industry. As we’ll see, for instance, in some of the industries NVIDIA serves the main customers are large corporations and big tech companies. In other cases, those can be small and medium sized businesses. While the underlying technology is similar for all the use cases. Each of those customers will require different enhancements, specific for the industry.,

NVIDIA gaming GPU enhances the gaming experience with smoother, higher quality graphics. Some of those applications include GeForce Experience (application that optimizes the PC user’s settings).

Or perhaps NVIDIA RTX which provides “cinematic-quality rendering” for gaming.

Thus the core value proposition for enterprise clients in the gaming industry stands in the advanced graphics its GPUs can provide, combined with the software stack enhancements.

Even here, the value proposition is dependent upon the specific industry/use case.

In this specific segment NVIDIA solutions enhance productivity and improve the workflow for industries like automotive, media and entertainment, architectural engineering, oil and gas, and medical imaging.

When it comes to data centers GPUs here it’s all about efficiency. The customer here is represented by large corporations such as Cloud Platforms (AWS, Alibaba, Azure, Google Cloud, IBM Cloud and more).

NVIDIA follows a platform strategy, meaning that the hardware and software come together to offer a set of services and tools to enhance the ability of its GPUs. For instance its software libraries, Software Development Kits and APIs frameworks makes it possible for deep and machine learning models to run smoothly.

And this indeed is critical for data cloud providers, which serve primarily the AI/ML industries. In fact, on top of data cloud providers like AWS (Amazon), Azure (Microsoft), Google Cloud and IBM Cloud entire industries of small, medium and large enterprises are built upon (the whole SaaS industry has been built on top of these providers, and also larger players like Netflix, Spotify, YouTube and the major streaming services draw from cloud computing).

Therefore, the ability of the GPU to run on massive amounts of data is the key value proposition. NVIDIA here emphasizes high performance, and efficiency. Its chips coupled with NVIDIA programming models (like CUDA and its acceleration libraries, APIs and tools) makes NVIDIA offering compelling for these enterprise customers.

Also when it comes to automotive, NVIDIA serves large enterprise customers providing them an end-to-end solution for autonomous driving with its DRIVE brand. This comprises a set of applications to autonomous driving, from self-driving in fully autonomous mode, to co-pilot mode. As the company highlights the NVIDIA DRIVE “can perceive and understand in real-time what is happening around the vehicle, precisely locate itself on an HD map, and plan a safe path forward.”

How Does Square Make Money? Square Business Model In A Nutshell

Square is a merchant service company providing sellers with hardware and software tools to run their businesses. The company's CashApp...