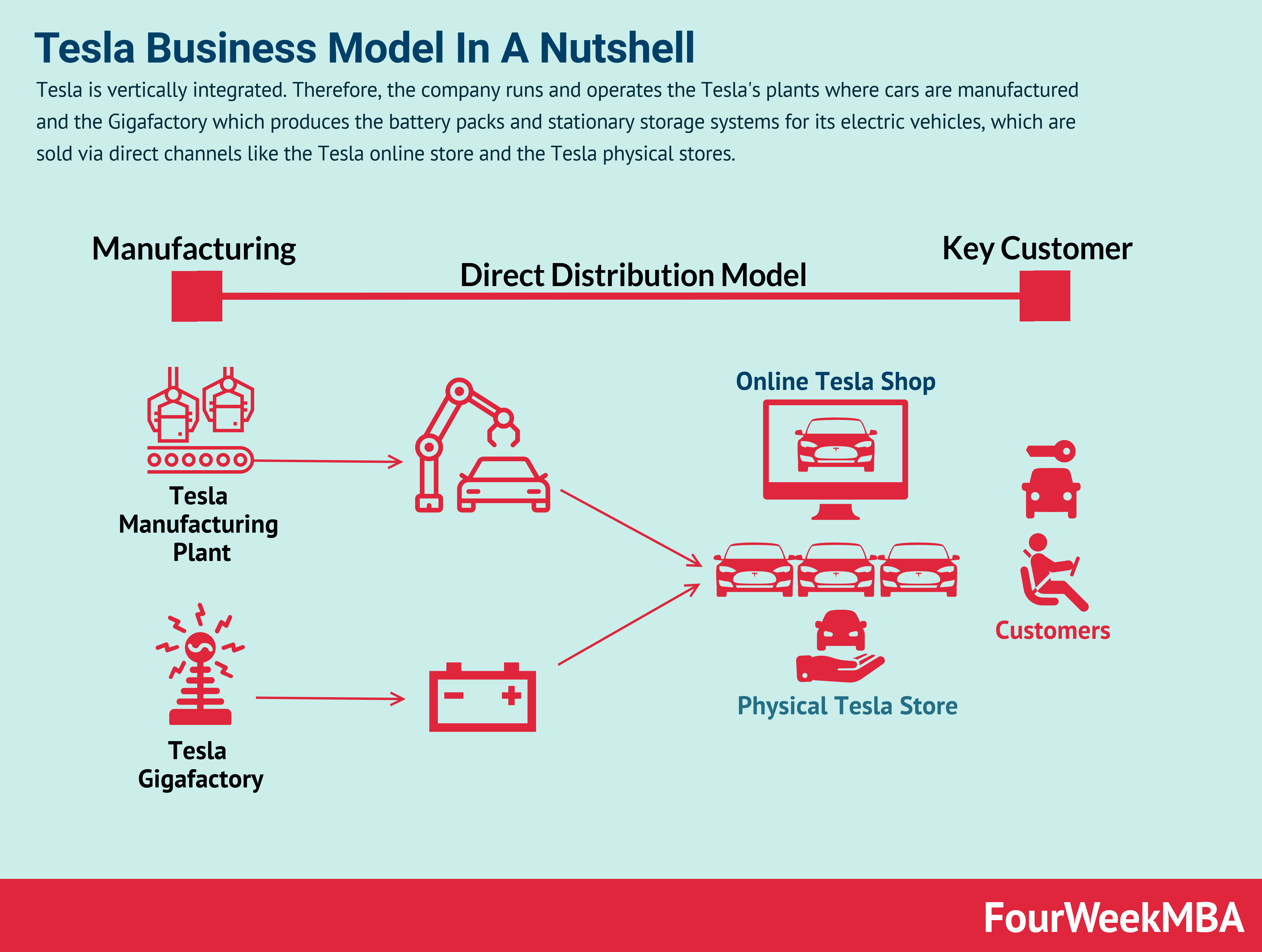 Tesla is vertically integrated. Therefore, the company runs and operates the Tesla’s plants where cars are manufactured and the Gigafactory which produces the battery packs and stationary storage systems for its electric vehicles, which are sold via direct channels like the Tesla online store and the Tesla physical stores.

For the first time in its history, in January 2020, Tesla has passed the $100 billion market capitalization. To gain a bit of context that is three times more the market capitalizaiton of Ford, in the same period.

The electric carmaker company is owned by entrepreneur/visionary Elon Musk. Tesla was founded by Martin Eberhard and Marc Tarpenning in July 2003. Elon Musk entered in Tesla in 2006, first as investor and chairman, then he took the role of CEO which he still holds today.

Back in 2018, Elon Musk highlighted the long-term vision for Tesla:

Our goal is to become the best manufacturer in the automotive industry, and having cutting edge robotic expertise in-house is at the core of that goal. Our recent acquisitions of advanced automation companies have added to our talent base and are helping us increase Model 3 production rates more effectively. We don’t want to simply replicate what we have built previously while designing additional capacity. We want to continuously push the boundaries of mass manufacturing.

Tesla’s mission can be summarized as:

As the company highlights:

Tesla builds not only all-electric vehicles but also infinitely scalable clean energy generation and storage products. Tesla believes the faster the world stops relying on fossil fuels and moves towards a zero-emission future, the better.

Based on the Tesla’s financial statements, in 2018 the company almost doubled its revenus while improving substantially its bottom line.

The most important revenue stream is the Automotive sales revenue (which includes revenues related to sale of new Model S, Model X and Model 3 vehicles, including access to Supercharger network, internet connectivity, Autopilot, full self-driving and over-the-air software updates, as well as sales of regulatory credits to other automotive manufacturers) with over $17 billion, followed by automotive leasing with over $880 millions and services and other with over £1.3 billion.

As highlighted in its financial statements, Tesla offers three core values to its customers:

Tesla is vertically integrated, as its pipeline goes from manufacturing to direct sales of its vehicles.

As highlighted by Tesla  “the benefits we receive from distribution ownership enable us to improve the overall customer experience, the speed of product development and the capital efficiency of our business.”

Even though a vertical integrated network representd a substantial investment in terms of physical asset Tesla can keep control over the experience of its customers. While also being able to retain important feedbacks throughout the supply chain.

Indeed, in a model where the customer is reached via indirect distribution the company might lose control of the customer experience at the last mile, and the valuable feedback it can gather from the marketplace.

Tesla follows an unconventional distribution model compared to other car manufacturers where the final sale is made via car dealerships which not tied to the company.

Does Tesla spend nothing in marketing?

Musk is famous for his unconventional stunts. For instance, the stunts of the flamethrowers or the Tesla roadsters sent on space managed to reach hundreds of millions of people worldwide without a dollar spent on ads.

However, this also fueled the myth that Tesla doesn’t spend a dollar on advertising campaigns or marketing.

Like any other company, Tesla has a marketing budget for advertising and marketing campaigns. In fact, as Tesla specified in its annual report for 2018, in the section related to “Marketing, Promotional and Advertising Costs:”

Marketing, promotional and advertising costs are expensed as incurred and are included as an element of selling, general and administrative expense in the consolidated statement of operations. We incurred marketing, promotional and advertising costs of $70.0 million, $66.5 million and $48.0 million in the years ended December 31, 2018, 2017 and 2016, respectively.

Thus, even though the former PayPal Mafia member Elon Musk is the master of unconventional PR, Tesla still needs advertising to push its sales.

However, if we compare that to the revenue figures for 2018 (over $21 billion), the spending in marketing activities is around 0,03% which is an incredibly low figure.

If we look at Tesla’s proxy statement for 2019, Elon Musk holds over 38 million stocks, which gives him a 21.7% ownership in the company. Followed by investment management firm, Baillie Gifford & Co with 7.7% and other capital and venture capital firms like FMR LLC, and Capital Ventures International.

Therefore, based on a $100 billiom market capitalization, Musk’s value of its stake in Tesla is over $20 billion.

Is Tesla profitable yet?

Tesla turned a profit for the first time on the third quarter of 2019. Indeed the company posted $143 million in net profits. However,  annualized the company still loses money.

Is Tesla worth more than GM?

In January 2020, Tesla passed for the first time in its history the market cap of $100 billion, twice the market cap of GM (about $50 billion) in the same period even though in 2018 GM had 6-7 times the revenues of Tesla. Tesla though is valued as a tech company, which in the future can capture a wider and wider market, thus becoming way more valuable.

What Is the Minimum Viable Product And Why It Matters

As pointed out by Eric Ries, a minimum viable product is that version of a new product which allows a...