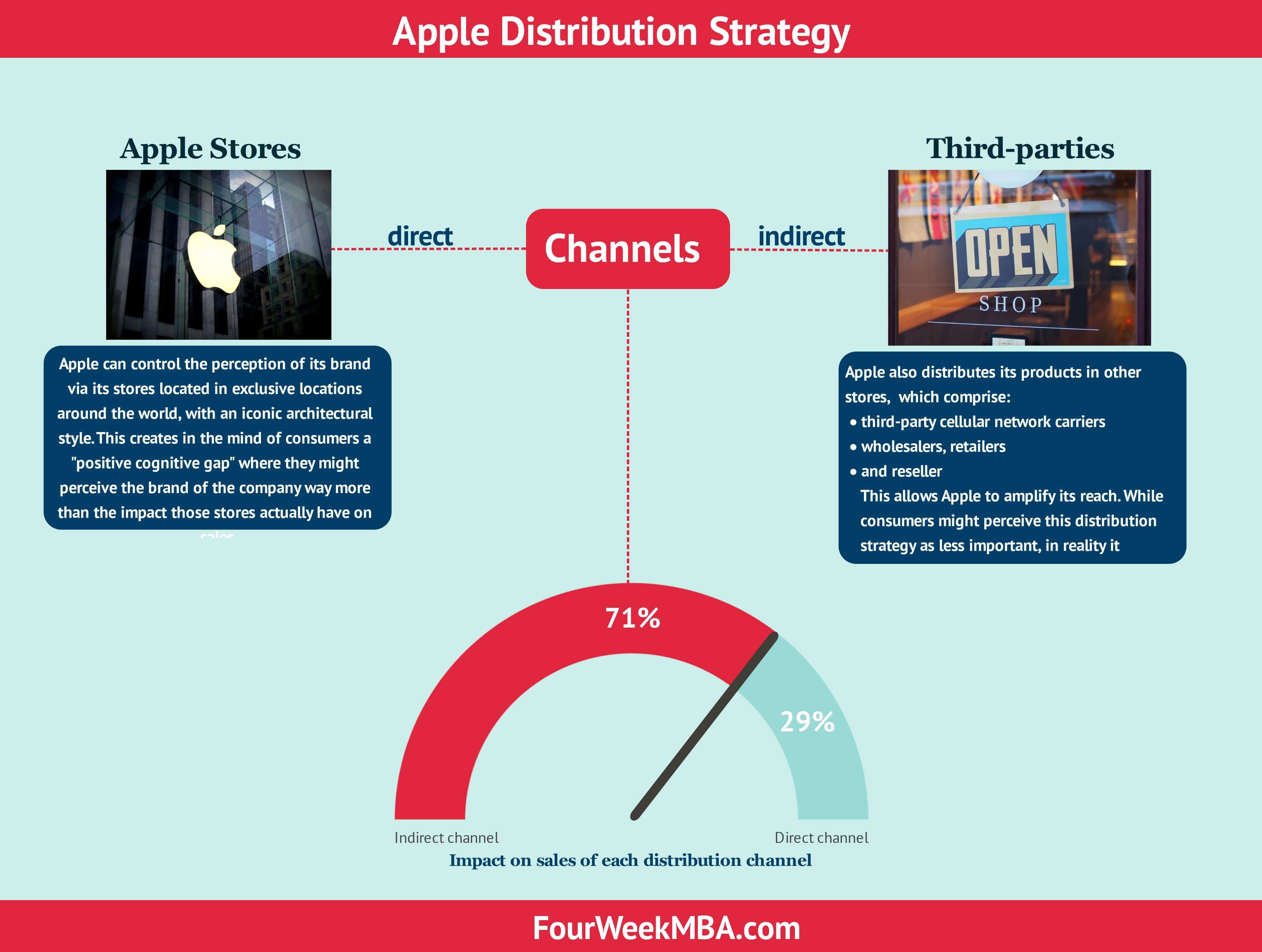 When you walk through the urban streets of cities around the world, in crowded and selected locations you’ll find an Apple Store. From Piazza Liberty in Milan, Cotai Central in Macau or Grand Central Terminal in New York, the Apple brand leaves a strong impression in the mind of its consumers.

Those impressions might also create a cognitive gap. In short, people might assume that those Apple Stores are also the primary driver of Apple’s revenues.

While Apple Stores are a crucial driver of its revenues, they are not a primary driver. Thus, let’s give a glance at Apple distribution strategy and why its stores aren’t necessarily what you think and what business function they have instead.

Apple distribution strategy in a nutshell

When it comes to distribution channels companies, usually use a direct or indirect approach. In many other cases through a mixture of direct and indirect channels make more sense.

For instance, the Apple business model leverages both on direct and indirect channels. Apple sells its products directly via its Apple Stores.

This is critical to Apple success as it enables it to deliver a high-quality buying experience for its products in which service and education are emphasized.

With this approach, Apple can employ experienced and knowledgeable personnel able to offer a wide selection of third-party hardware, software and other accessories that complement Apple’s products.

Indeed, you can see how a good chunk of Apple‘s revenues also comprise services (13%) and other products (5.6%). This means that the Apple stores are an essential driver of sales.

And it makes sense given how much the company spends in running them. To have a bit of context, in the next ten years Apple will spend over nine billion dollars in operating leases as reported on its financial statements.

Yet if Apple were relying solely on its retail operations, this would be too risky. Indeed, those retail stores are subject to financial risks and if sales were to rely exclusively on them would, when slowing down, it would easily create trouble for Apple long-term business success.

At the same time, Apple Stores have a high impact on the company’s brand. Indeed they create visibility for the brand and the company’s products. How? Let’s do this simple exercise.

Not by chance, Apple‘s retail stores are typically located at high-traffic locations in quality shopping malls and urban shopping districts. The aim is to create as much visibility independently from sales.

I’m not saying sales are not significant. The main point is that Apple can leverage its stores to have control of its branding strategy, thus the way consumers perceive the overall company.

Yet that is not where most of the sales happen! In short, the Apple Store isn’t just a retail store. As highlighted an Apple Store is a branding and marketing effort to create a controlled experience and imaginary in the mind of its consumers.

If it is easy to assume that most of Apple‘s revenues are coming from its direct channels, Apple employs a variety of indirect distribution channels that comprise:

Why? In 2018, according to Apple Annual Report, the company’s net sales through its direct channels accounted for 29% of its revenues. Compared to 71% of net sales coming from its indirect distribution channels!

Stores as Marketing and cognitive gaps

The main takeaway is that often companies engage in direct distribution strategies which are quite expensive and not necessarily tied to just revenue generation. A store where Apple can sell its products directly to the consumers has a massive branding advantage.

Apple can open up those stores in high traffic location in urban areas, and those stores often are architectural masterpieces, which want to capture the collective imaginary of people around the world, even though most of its sales happen via indirect distribution channels.