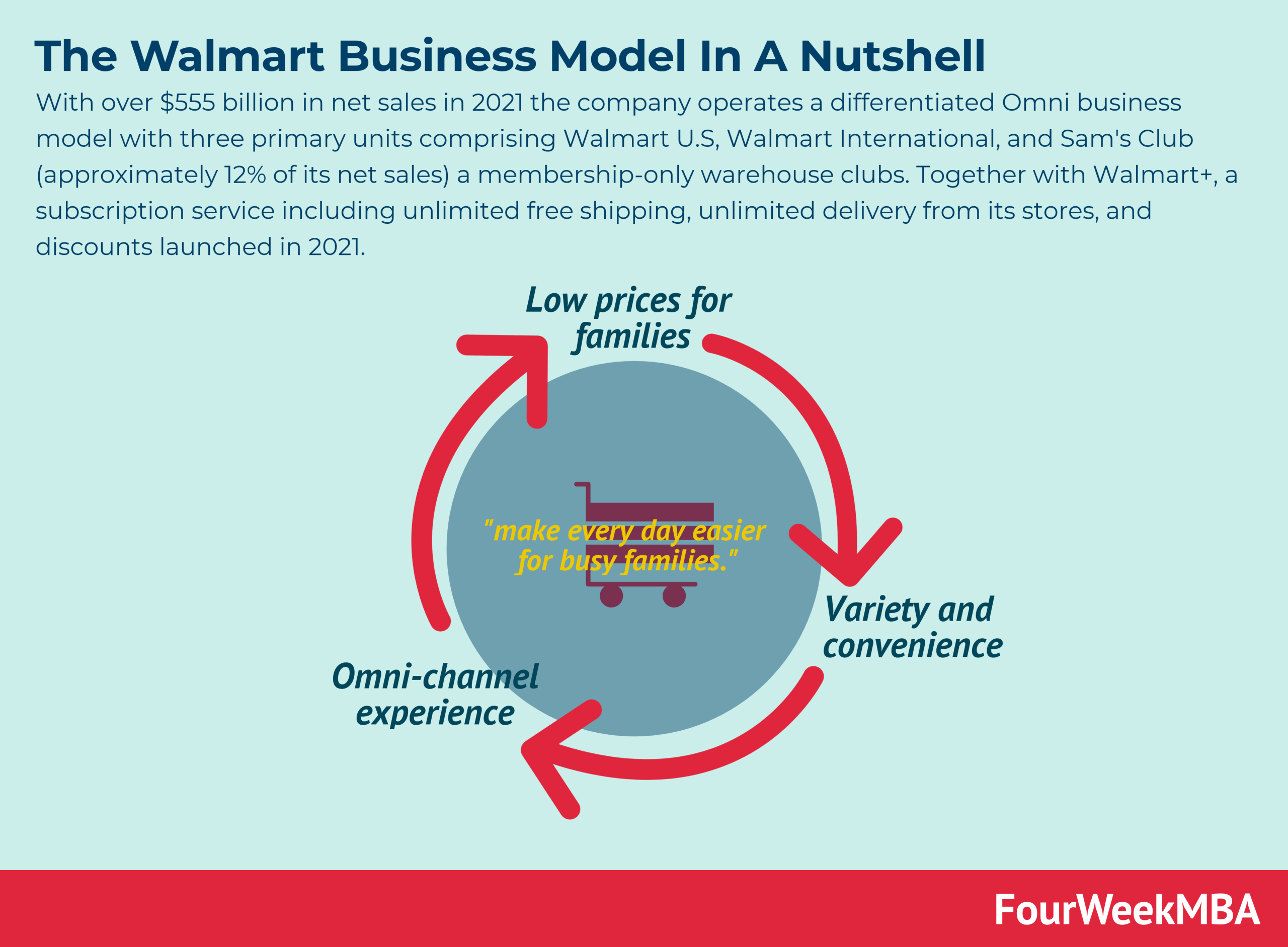 With over $555 billion in net sales in 2021 the company operates a differentiated Omni business model with three primary units comprising Walmart U.S, Walmart International, and Sam’s Club (approximately 12% of its net sales) a membership-only warehouse clubs. Together with Walmart+, a subscription service including unlimited free shipping, unlimited delivery from its stores, and discounts launched in 2021.

Back in 1945, Sam Walton built up from scratch, what would later become the largest retailer in the world.

By the 1990s Walmart had become a giant in the US and it had also started global expansion.

Starting the 2000s, as e-commerce picked up, with Amazon, once a startup, then become a tech giant. This led also Walmart in the direction of investing massive resources online.

To stay competitive, as the pandemic hit the world, in 2021, Walmart also started to offer Walmart+, a subscription service including unlimited free shipping, unlimited delivery from its stores, and discounts.

As the company highlighted with the launch of its subscription service:

Walmart+ uses the company’s unique assets to make life easier for busy families. Along with the power of its online presence, Walmart+ has the reach of more than 4,700 stores, including 2,700 stores that offer delivery as fast as same day. Members will receive unlimited free delivery from stores, fuel discounts and access to tools that make shopping faster for families. Membership will be available to all customers on Sept. 15. It will cost $98 a year or $12.95 a month and includes a 15-day free trial period. In the future, the company will leverage its wide-ranging strengths to add additional benefits for members in a variety of services and offerings.

The three main features of the service are:

Some key hihglights of the Walmart’s history:

Walmart Mission and Vision are expressed below.

Walmart is still tightly owned by the Walton family:

And below a SWOT Analysis of Walmart:

Walmart main motto is to “leading on price, invest in differentiating on access, be competitive on assortment and deliver a great experience by the motto of EDLP (every day low prices).“

Everyday low cost (“EDLC”) is Walmart’s commitment to control expenses. Those savings can be passed along to customers. Walmart has an omnichannel presence to provide customers access to a broad assortment of goods at any time and in many locations in the US and internationally. Besides its physical infrastructure, Walmart has also been investing in its digital platforms, based on eCommerce.

Walmart U.S. is the largest segment operating in all the 50 states in the U.S., Washington D.C. and Puerto Rico. It follows three primary store formats, as well as eCommerce. Walmart U.S. generated approximately 64% of our net sales in 2018.

The US segment follows what Walmart defines a “differentiated Omni business model” which tries to lead the customers off and online.

Walmart International consists of operations in 27 countries outside of the U.S.

These categories consist of many formats, including:

Sam’s Club consists of membership-only warehouse clubs which operates in 44 states in the U.S. and Puerto Rico, as well as eCommerce. Sam’s Club accounted for approximately 12% of 2018 net sales.

As a membership-only warehouse club, membership income is a significant component of the segment’s operating income.

When it comes to merchandising Walmart sold three main categories:

How does Walmart manage to be competitive with such low prices? Inventory management is the key

As specified in its annual report Walmart can develop, open, and operate units at the right locations and to deliver a customer-centric omnichannel experience. That largely determines its competitive position within the retail industry. Walmart employs many programs designed to meet competitive pressures within its industry.

These programs include the following:

How does Walmart distribution work?

For 2018, approximately 78% of Walmart U.S.’s purchases of store merchandise were shipped through 157 distribution facilities, located throughout the U.S.

The remaining merchandise gets shipped directly from suppliers.

The principal focus of Sam’s Club’s distribution operations is on cross-docking merchandise, while stored inventory is minimized.

As explained by Walmart:

Cross-docking is a distribution process under which shipments are directly transferred from inbound to outbound trailers.

In short, shipments typically spend less than 24 hours in a cross-dock facility, and sometimes less than an hour.

Sam’s Club uses a combination of our private truck fleet, as well as common carriers, to transport non-perishable merchandise from distribution facilities to clubs.

The segment contracts with common carriers to transport perishable grocery merchandise from distribution facilities to clubs.

Sam’s Club ships merchandise purchased by members on samsclub.com and through its mobile commerce applications by a number of methods from its dedicated eCommerce fulfillment centers and other distribution centers.