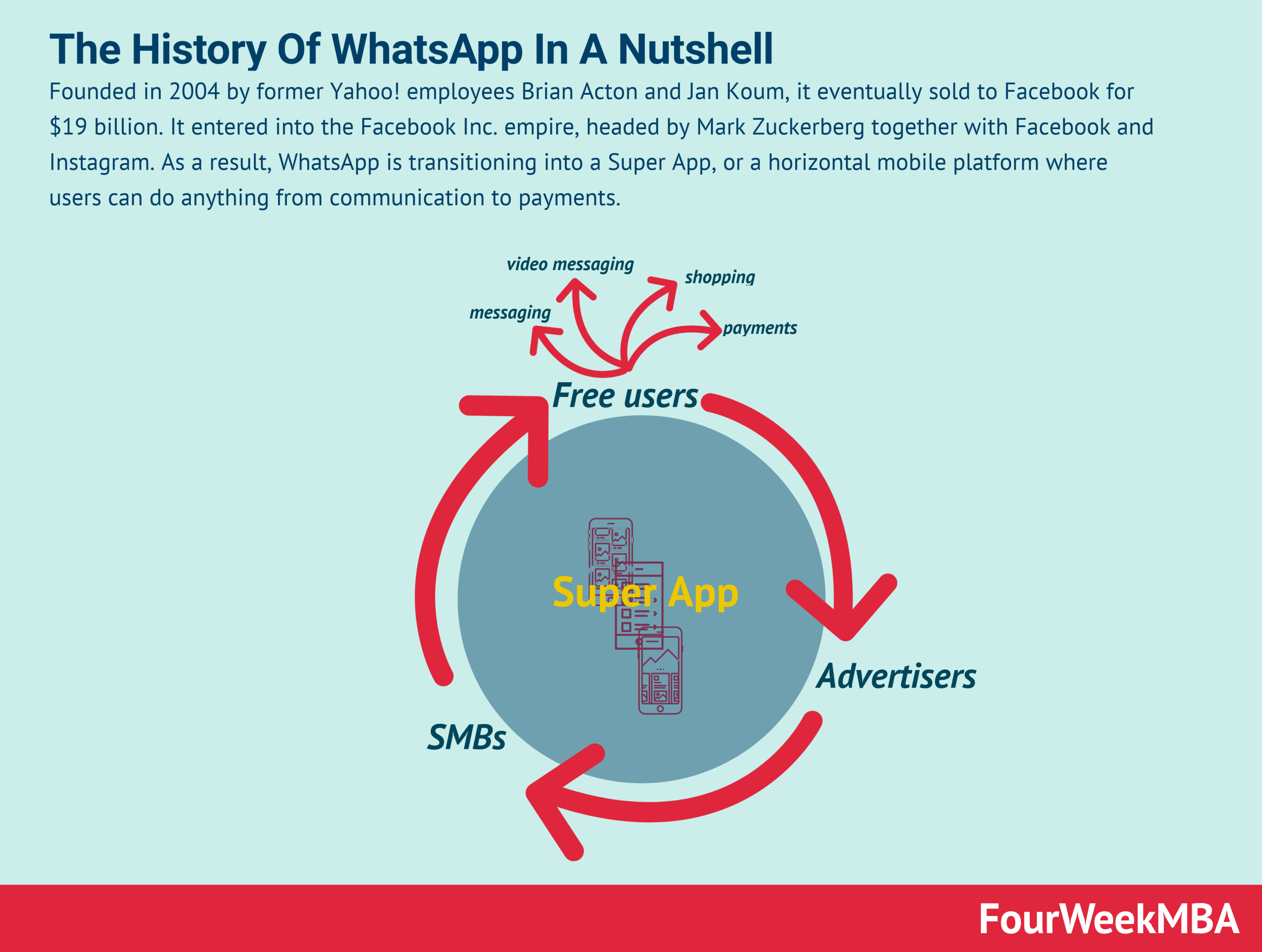 Founded in 2004 by former Yahoo! employees Brian Acton and Jan Koum, it eventually sold to Facebook for $19 billion. It entered into the Facebook Inc. empire, headed by Mark Zuckerberg together with Facebook and Instagram. As a result, WhatsApp is transitioning into a Super App, or a horizontal mobile platform where users can do anything from communication to payments.

WhatsApp was founded in 2004 by former Yahoo! employees Brian Acton and Jan Koum. Both Acton and Koum were early adopters of the iPhone and realized the then newly-created App Store was about to create a whole new industry.

The pair refined their idea for WhatsApp during weekly pizza and movie nights with friends. Koum in particular envisioned an app where a list of names in an address book could have individual statuses.

For example, one contact might be on a call while another had a low battery. Pizza and movie night host Alex Fishman then introduced Koum and Acton to iPhone developer Igor Solomennikov – a Russian developer Fishman had found on RentACoder.com. Eager to begin, Koum incorporated WhatsApp in February 2009.

Koum spent much of 2009 writing the backend code for WhatsApp and spent many tedious hours adjusting it for the nuances of international dialing prefixes.

Indeed, early versions of WhatsApp frequently crashed and users of the app were limited to Fishman’s immediate circle of friends.

A few months later, Koum flirted with quitting WhatsApp and looking for another job. But the somewhat serendipitous launch of push notifications by Apple saved the day. This allowed a WhatsApp user to ping everyone in their network every time they changed status.

Custom statuses such as “I woke up late” or “I’m on my way” eventually morphed into an instant messaging service. At the time, there was little competition in this space.

In October 2009, Acton persuaded five of his former Yahoo! colleagues to provide $250,000 in seed funding. One month later, the app was launched in the App Store.

Koum and Acton would work for free for the next few years, sharing an unmarked building with Evernote and wearing blankets in the winter for warmth.

WhatsApp then became a paid service, ostensibly to limit growth but also to cover mounting operational costs. Just two years later, it was firmly entrenched in the top twenty apps in the U.S. App Store.

After securing $8 million in VC funding, the app grew quickly with over 200 million users by February 2013.

Realizing its growth potential – particularly in developing markets – Facebook made moves to acquire WhatsApp in February that same year.

The deal was eventually done for a staggering $19 billion, with many questioning why Facebook would pay so much for a company making just $20 million in annual revenue. In simple terms, WhatsApp had become a direct threat to the longevity of the social media platform – and Zuckerberg knew it.

The location of the deal was also somewhat poetic for Koum. He and Acton met with Sequoia venture capitalist representative Jim Goetz in a disused building not far from WhatsApp headquarters. The location was also the former welfare office where Koum, a Ukrainian immigrant, had stood in line for food stamps years earlier.