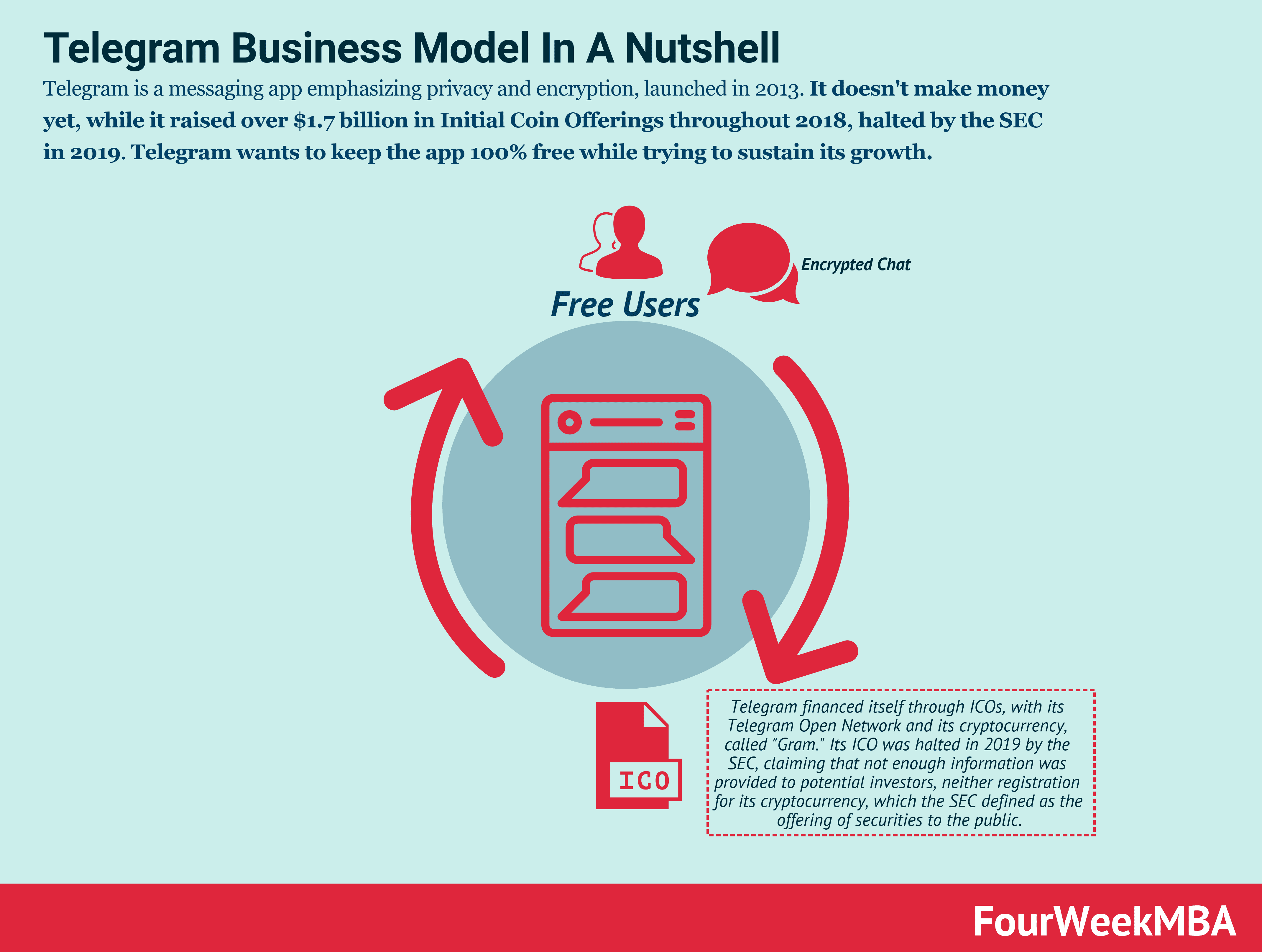 Telegram is a messaging app emphasizing privacy and encryption, launched in 2013. It doesn’t make money yet, while it raised over $1.7 billion in Initial Coin Offerings throughout 2018, halted by the SEC in 2019. Telegram wants to keep the app 100% free while trying to sustain its growth.

Brothers Nikolai and Pavel Durov didn’t have an easy life as entrepreneurs. Indeed, although they had launched a successful startup in Russia (their country of origin), they had to sell it and fly out from the country eventually.

Indeed, back in the early 2000s as Facebook was becoming popular, Pavel Durov heard about this social network idea. He got inspired and together with the brother, they launched in 2006, VK (formerly VKontakte). The social media app became wildly popular in Russia and Europe.

Yet as popularity grew and the company valuation skyrocketed, in 2014 Pavel Durov had to sell the company (at the time it had become the most popular social media in Russia).

As reported by techcrunch.com back then, “Durov had to sell his 12 percent stake to Ivan Tavrin, the CEO of major Russian mobile operator Megafon. The telco’s second-largest shareholder is Alisher Usmanov, one of Russia’s most powerful oligarchs, a man who has long been lobbying to take over VK.”

It was time to start another company. This time focused on privacy: Telegram.

When Pavel Durov launched Telegram back in 2013, it reached explosive growth in an incredibly short time frame. As Durov pointed out on his VK account:

As of 2019, Telegram has acquired over a billion dollars through two ICO offerings. Its growth exploded even further when in March 2019, WhatsApp and other Facebook products experienced an outage, and users flocked in the millions to Telegram.

How is Telegram different from WhatsApp?

As pointed out on the Telegram website, “thanks to its multi-data center infrastructure and encryption, Telegram is faster and way more secure.”

Also, Telegram is free, and as Durov pointed out several times, it will stay open (Durov noted the company wasn’t going to monetize it with ads, nor subscription fees, forever.)

How does Telegram make money?

Telegram doesn’t make money, or at least it doesn’t generate revenues, as of 2019. Durov pointed out on a blog post that he “believes in fast and secure messaging that is also 100% free.”

On the same blog, post, Telegram notes that if it were to run out of money, it might introduce “non-essential paid options” to supplement developers’ salaries.

Will Telegram make money with ads in the future?

It probably won’t while Durov is in charge. As explained in a recent post:

What features make Telegram different from any other app?

It’s not a single feature that makes Telegram different. Instead, it is the culture it built, together wit ha set of features that make Telegram unique. Below an overview of some of Telegram’s features highlighted on Telegram’s website:

As Telegram highlights in its White Paper:

Telegram will use its expertise in encrypted distributed data storage to create TON, a fast and inherently scalable multi-blockchain architecture. TON can be regarded as a decentralized supercomputer and value transfer system. By combining minimum transaction time with maximum security, TON can become a VISA/Mastercard alternative for the new decentralized economy.

As highlighted in the same White Paper:

The TON coins exchanged by Telegram users will be called «Grams» and denoted by the TON. The Gram will serve as the principal currency for the in-app economy on Telegram, and, like any other cryptocurrency, will be available for external use.

For what uses will the TON cryptocurrency be used? Telegram highlights:

How does Telegram plan to use the financial resources from the ICOs? As highlighted in the White Paper:

More than 80 percent of collected funds will be spent on equipment, bandwidth, colocation, and user verification costs. The rest will be allocated for wages, offices, and legal and consulting services.

To sustain its growth Telegram raised capital through two ICOs back in 2018. However, the SEC (Securities and Exchange Commission) released a halt for Telegram ICO, in October 2019. As the SEC highlighted:

Telegram Group Inc. and its wholly-owned subsidiary TON Issuer Inc. began raising capital in January 2018 to finance the companies’ business, including the development of their own blockchain, the “Telegram Open Network” or “TON Blockchain,” as well as the mobile messaging application Telegram Messenger.

As the SEC specified:

Defendants sold approximately 2.9 billion digital tokens called “Grams” at discounted prices to 171 initial purchasers worldwide, including more than 1 billion Grams to 39 U.S. purchasers. Telegram promised to deliver the Grams to the initial purchasers upon the launch of its blockchain by no later than October 31, 2019, at which time the purchasers and Telegram will be able to sell billions of Grams into U.S. markets. The complaint alleges that defendants failed to register their offers and sales of Grams, which are securities, in violation of the registration provisions of the Securities Act of 1933.

In short, the SEC, considered the coin offering, the “Gram” which Telegram was about to release in the billions in the US, as an immission of securities in the marketplace and as such those needed to be registered.

As the SEC further claims:

Our emergency action today is intended to prevent Telegram from flooding the U.S. markets with digital tokens that we allege were unlawfully sold.

In short, the SEC claims that Telegram didn’t provide enough information to investors around the “Grams and Telegram’s business operations, financial condition, risk factors, and management that the securities laws require.“

Usually companies about to go public through an IPO, release a form, submitted to the SEC, that helps explains to investors all the aspects of the business, and give enough public information to enable both the SEC and investors to make a proper decision about the company going through the IPO process.

According to the SEC, Telegram didn’t comply with that process.

By May 2020, US court, officially stopped the TON Blockchain project, which would have brought to the release of the Telegram-based cryptocurrency: Gram.

Pavel Durov explained his point of view about the US court decision on his channel “Imagine that several people put their money together to build a gold mine – and to later split the gold that comes out of it. Then a judge comes and tells the mine builders: ‘Many people invested in the gold mine because they were looking for profits. And they didn’t want that gold for themselves, they wanted to sell it to other people. Because of this,  you are not allowed to give them the gold.'”

In short, according to Pavel Durov, the US court treated the Telegram Open Blockchain (TON) as the mine, and its Grams as the gold. According to this interpretation, investors that bought the mine, could not later sell the gold, unless they wanted to keep it for themselves.

As a result Telegram agreed to return more than $1.2 billion to investors and to pay an $18.5 million civil penalty.

As the SEC stated in its final ruling:

New and innovative businesses are welcome to participate in our capital markets but they cannot do so in violation of the registration requirements of the federal securities laws.

On its side of the story, the SEC further highlighted “Our emergency action protected retail investors from Telegram’s attempt to flood the markets with securities sold in an unregistered offering without providing full disclosures concerning their project.“