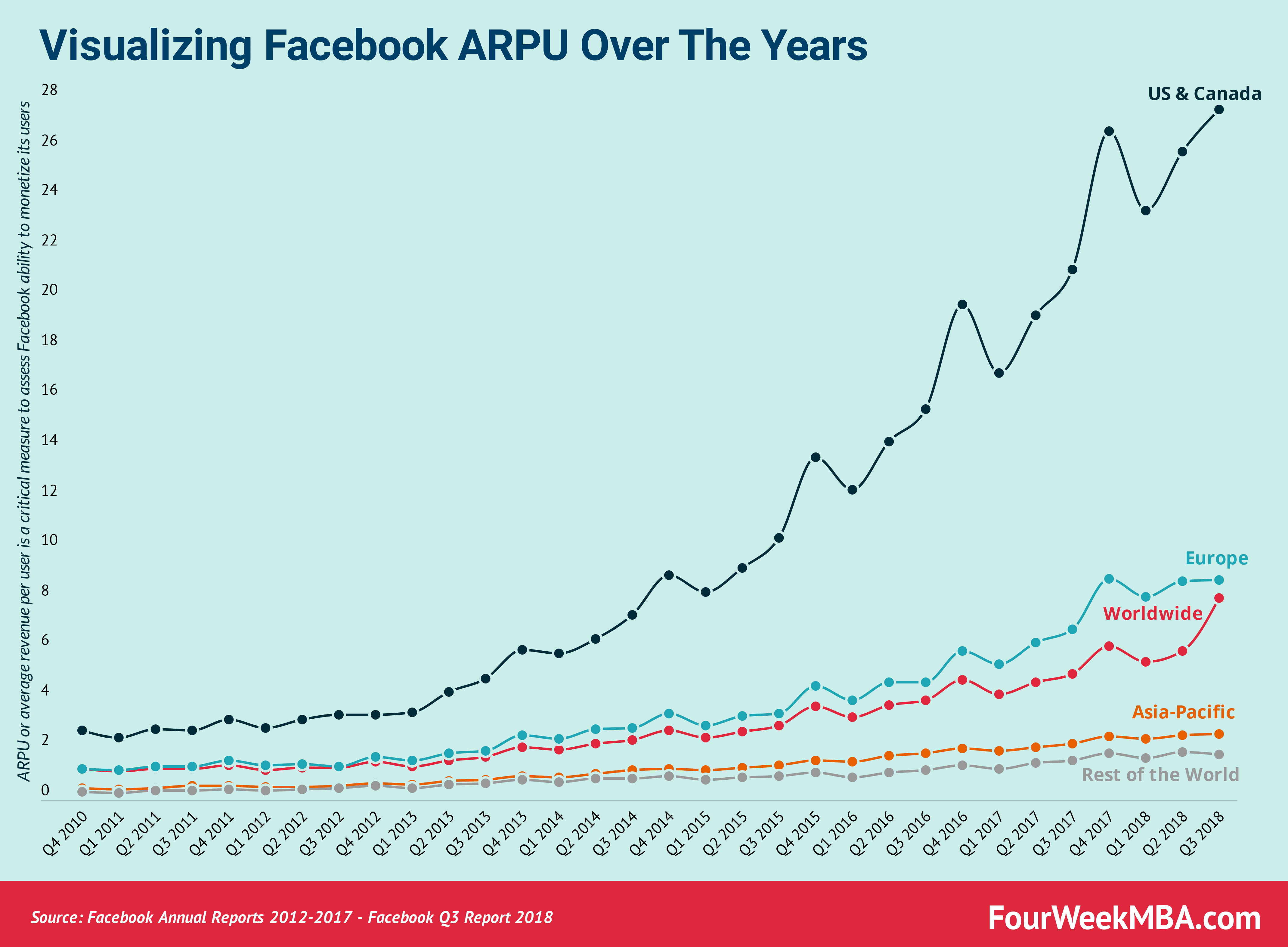 In the infographic above you can appreciate Facebook growth in ARPU over the years. ARPU or average revenue per user is a critical metric to understand how Facebook monetizes and has monetized its users over the years.

As the Facebook business model is primarily powered by advertising, failing in monetizing its users, by selling them targeted ads would mean a failure in its overall business model.

In fact, rather than becoming less relevant, advertising revenues in proportion to other monetization strategies have grown over the years and in 2017 represented more than 98% of its revenues:

Revenues from advertising, at least as of the third quarter of 2018, seemed to be driven by mobile advertising, which contributed to most of Facebook revenues.

I took a long-term perspective on how the company has grown its monetization strategy over the years.

After an inflection in the first quarters of 2018 in the US & Canada, Facebook seems to be growing again, Especially in these two countries, which still represents the most important markets. While in Europe’s growth has flattened:

What, if any, can we notice from those numbers?

Besides that buzz and voicing that Facebook would soon be doomed, the company has gone through it (at least for now) successfully.

This leads us to the second point.

In general, companies can execute several business strategies to keep growing their users’ base. In particular, Facebook has been acquiring other companies, when they were still in a startup mode; and paid them at a relatively low price (at hindsight) compared to what those companies have meant in terms of monetization strategy in these days.

For instance, Facebook owns several companies and products, some of them are:

Each of those companies has been critical in terms of Facebook ability to keep monetizing the data from its users.

In accordance with their respective terms of service and privacy policies. We may share information about you within our family of companies to facilitate, support and integrate their activities and improve our services.

Which means Facebook can better sell targeted ads to users, and monetize those ads by having marketers and companies pay for eyeballs.

While we don’t know for sure the breakdown of revenues coming from advertising on Instagram (Facebook doesn’t officially report it) it might be possible that Instagram has driven a good chunk of the revenue growth in the last years.

Facebook so far has made just the right acquisition at the right time to move to the next stage of the web.

That is also why it acquired Oculus (a VR device) and Masquerade (face tracking app that offers three-dimensional animations to users’ faces). We’ll see if those moves will turn out to be successful for the coming years.

ARPU doesn’t capture what I would define power users (those that are worth the most to the platform based on how much they use it and engage with it). In short, Facebook might be described as a marketplace for attention, some users are just average, while a very few are power users and they do make a difference to the overall company’s strategy.

While Facebook doesn’t disclose the demographic of users that are worth the most, they might have internal metrics that help them navigate through their long-term strategy and how to keep those power users engaged.

Not all users are born equal

When you look at Facebook ARPU, one thing is clear; not all users are born equal. Users’ monetization primarily depends on ads budgets in each country.

It is clear that countries like the US and Canada have way higher ads budget, also given their higher GDP per capita, compared to other countries from Asia or Eastern Europe.

That is also why the ARPU for other geographical areas is way lower.

This brings us to the next point.

The US represents the critical country for Facebook‘s revenue and its monetization strategy. While its ARPU has also grown in 2018, the user base has pretty much stalled.

That might be driven by increased budget in mobile advertising.

The penetration of Facebook in the US has reached 72.4% according to internetworldstats.com. This makes it hard for Facebook to expand further in terms of users’ base.

Data has a value in its own sake

Besides the $ value in terms of monetization, analyzing the data based only on the ARPU is quite limited.

Indeed, even though Facebook doesn’t yet make much money with its users outside US, Canada, and Western Europe, it still collects data, that makes the platform grow and become better and stronger over time.

While Facebook still faces operating costs of running its servers and platform in those countries, this cost is financed by other countries (like the US) that bring in revenues at a substantial margin for Facebook.

Indeed, Facebook enjoys incredible profit margins, that make it one of the most profitable tech companies:

From whatever perspective you look at Facebook, the company it’s and has been a goldmine to its investors.

Thus, when and if Facebook will be able to monetize those users around the world, and in emerging markets, it might turn out to be even more profitable (assuming Facebook business model will hold over time).