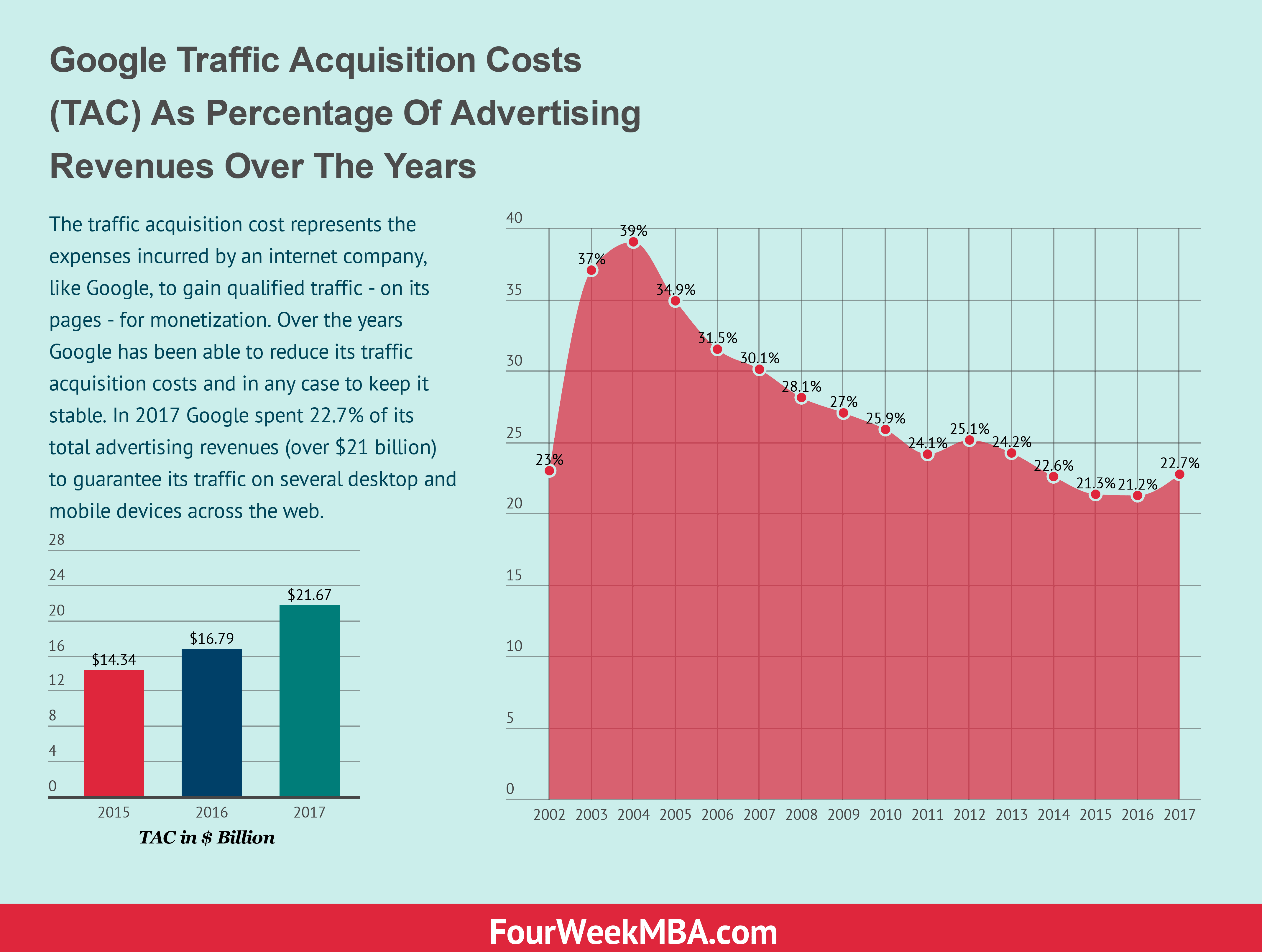 The traffic acquisition cost represents the expenses incurred by an internet company, like Google, to gain qualified traffic on its pages for monetization. Over the years Google has been able to reduce its traffic acquisition costs and in any case to keep it stable. In 2017 Google spent 22.7% of its total advertising revenues (over $21 billion) to guarantee its traffic on several desktop and mobile devices across the web.

As of the time of this writing Google is the most popular website on earth. It is important to remember that. Indeed, as a search engine, we often forget that Google is also a website, a place on the web where people go voluntarily to find information of any time. As a website, Google needs to make sure to have a constant stream of traffic on its search results pages.

To attract traffic Google has developed several strategies throughout the years. While its ability to index the entire web and show by time to time results based on users searches. Ordered by relevance and authoritativeness (its ranking system) has proved a critical weapon to its success. However, were users not going back to Google over and over again, its search engine would not have improved. Thus, it would not have been able to succeed at the level it did today.

Indeed, users’ data is critical for Google experimentation and change, thus improvements. Between 2017-18 of over 200,000 experiments Google made over 2,400 changes to its search algorithm.

Since its first distribution deals, Google understood right away that monetizing its pages was the key to its success. Many search engines and websites back then drove traffic which was not qualified enough to be monetized or at least to be monetized at the point of creating a successful and sustainable business.

Yet Google once found the right traction channel (be it AOL, Netscape or any other deal that would come afterward) it managed to find the sweet spot which allowed it to monetize its pages enough to be extremely profitable.

Therefore, a key metric to look at to understand Google success is its traffic acquisition cost.

What does the traffic acquisition cost stand for?

Keeping the traffic acquisition costs at a stable level over the years is the key to make sure the company remains sustainable and financially successful. This implies a set of initiatives to create a network of partners, distributors, and any other way that allows the company to attract qualified traffic that converts into revenues for the business.

What does the Google traffic acquisition cost comprise?

Cost of revenues consists of TAC which are paid to Google Network Members primarily for ads displayed on their properties and amounts paid to our distribution partners who make available our search access points and services. Our distribution partners include browser providers, mobile carriers, original equipment manufacturers, and software developers.

As specified in its annual report for 2017, Google traffic acquisition costs (TAC) comprise the payout to Google partners, which take part to program like AdSense. It also comprises browser providers, mobile carriers and any other distribution channel.

Many give for granted Google success. Yet from its first days Google managed to close massive deals that guaranteed it enough distribution and traction to grow substantially over the years. Netscape, AOL, Safari and many other channels guarantee to Google an enormous amount of traffic each year. That traffic also has a cost.

Why Google traffic acquisition cost is more expensive for AdSense?

The traffic that comes from Google main properties (like its main search pages) is less expansive than the traffic coming from the sites part of AdSense. The reason is pretty simple; Google has to give most of the revenues coming from AdSense to the websites part of the network. The AdSense network has been critical to Google success to allow it to serve organic results, besides it paid results. Even though the traffic cost is higher, so far AdSense has played an essential role in the overall Google business model.

As specified in its annual report for 2017:

For instance, as we’ve been moving from desktop to mobile, the traffic cost for Google has proved higher, however also easier to monetize. Thus, even if it grew, Google managed to have its revenues to grow faster than its costs.

As listed in the Google annual report some of the causes of increased traffic acquisition costs are:

Traffic acquisition costs over the years

It’s easy to give for granted Google success in terms of traffic; Yet Google is a website, which needs a continuous flow of qualified traffic that makes it able for the company to generate enough revenues to create a sustainable and profitable business. Since its first deals, Google has been able to drive massive amounts of traffic to its search pages.

At the same time, AdWords and AdSense allowed the company to generate enough revenue to make it one of the most profitable internet companies ever existed.

References for this article:

Amazon is the largest online store in the world. Started out as an online bookstore, now Amazon embraces any product...