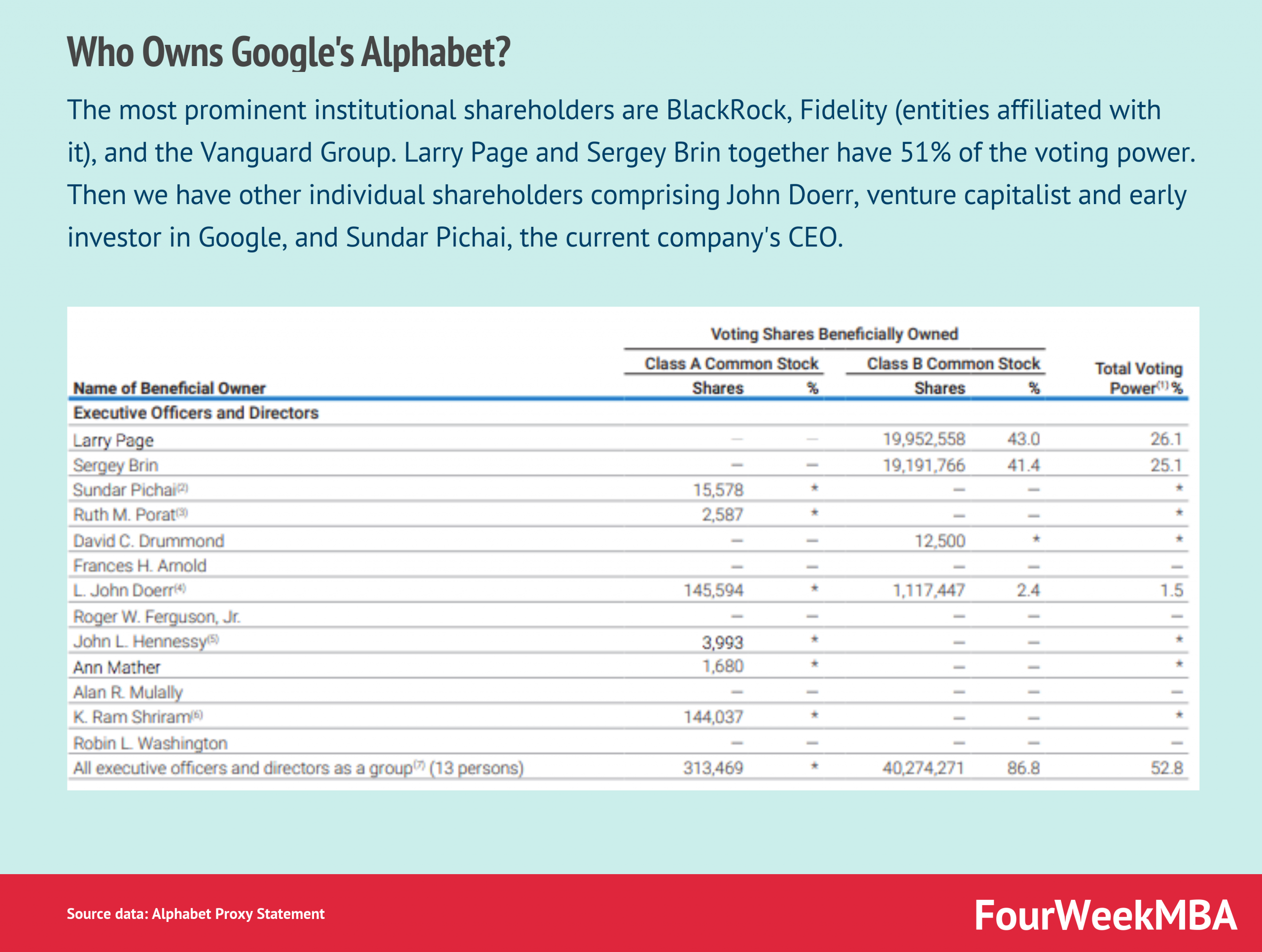 The most prominent institutional shareholders are BlackRock, Fidelity (entities affiliated with it), and the Vanguard Group. Larry Page and Sergey Brin together have 51% of the voting power. Then we have other individual shareholders comprising John Doerr, venture capitalist and early investor in Google, and Sundar Pichai, the current company’s CEO.

Google’s Class A, Class B, and Class C stocks: Not all shares are born equal

When a company decides to issue equity in the form of common stocks, it can do so in several types depending on the limitations that the owners of the company want to give to voting powers.

We can define the Class B stocks as on common shares on steroids. In fact, they empower those who own them to keep control of the company. Page and Brin, Google’s founders wanted to keep as much power of the future decisions of the company they leveraged on Class B Common Stocks to have a higher weight on the company’s decisions.

Holders of Class C capital stock have no voting power as to any items of business that will be voted on at the Annual Meeting. Those do confer ownership in the company and the right to be paid based on dividends and the company’s stock appreciation.

Who are Google’s Directors and Executive Officers?

During 2017, the Board of Directors was composed of thirteen directors with the following committees:

1. an Audit Committee, whose primary function is to oversee accounting and financial reporting processes

2. a Leadership Development and Compensation Committee, the purpose is to oversee the compensation programs.

From time to time, the Board of Directors may also establish ad hoc committees to address particular matters.

What’s the compensation for Google’s executives?

As a multi-billion tech giants, Google’s compensations are very competitive and based on the following elements:

In assessing the compensation part, Google took into account (at least for 2017) the following “peers companies:”

Bellow the table summarizing the compensations of the top executives at Google:

We can break down all the compensations in base salary, bonuses, stock awards, option awards, non-equity incentives plans, and non-qualified deferred compensation earnings.

What’s the difference between Stock awards and Option awards

When it comes to stock awards, they usually can get “vested” (it means exercised or monetized) at a certain date. For instance, we can see how in 2017 both Eric Schmidt and Sundar Pichai “vested” millions of dollars of stock awards:

When it comes to option awards the executive or employee that receives it will have a fixed price to buy the stock at a specified date:

For instance, in this table that shows the unvested (not yet exercised) stock options held by Schmidt and Pichai by December 2017, you notice the so-called exercise price.

That means, for instance, that in 2021 Eric Schmidt can purchase 181,840 Google’s stocks at $306.61. Just to put things in context at the time of this writing the price of Google’s stock (Alphabet Class A stocks) is $1,225.42. Thus, if in 2021 the stock of Google will depend on those levels, Schmidt will earn on the difference between the exercise price and the current price when options get vested.

I suggest you look at our Financial Options simple guide:

Google ownership structure before its 2004 IPO

At the time, just like today Brin and Page seemed to be obsessed with control and ownership. In fact, at the time both of them held over 55.6% of the voting power.

Back then the other individual investors with a consistent stake in the company were – at the time – CEO Erick Schmidt, venture capitalist John Doerr, venture capitalist Michael Moritz and Omid Kordestani, who at the time was in charge of Business Development and Sales and one of those who helped Google scale up (he closed the AOL deal).

The control of the company is still in the hands of the two co-founders, Page and Brin. If we look at the individuals owning the company we have Larr Page and Sergey Brin, which together have 51% of the voting power. Other substantial private investors comprise John Doerr (read OKR) venture capitalist and early investor in Google, and Sundar Pichai, the current company’s CEO.

The most prominent institutional shareholders (those with more than 5% of Google’s – now called Alphabet – share) are BlackRock, Fidelity (entities affiliated with it), and the Vanguard Group.

Who are Google’s top individual investors and owners?

Founder of Google together with Sergey Brin, Page was the inventor of the PageRank algorithm that made Google the success we know today. Director Since 1998 Larry Page, Chief Executive Officer of Alphabet. He has served as a member of the Board of Directors since its inception in September 1998.

Founder of Google together with Larry Page. Director Since 1998 Sergey Brin, President of Alphabet, has served as a member of Google Board of Directors since its inception in September 1998.

One of the venture capitalist being – almost – since the beginning, John Doerr was director Since 1999 and has served as a member of Google Board of Directors since May 1999. John Doerr has been a General Partner of Kleiner Perkins Caufield & Byers, a venture capital firm, since August 1980.

Newly appointed CEO – since 2017 – he has served as a member of Google Board of Directors since 2017. He previously served as Google’s Senior Vice President of Products, from October 2014 to October 2015.

Over the years, while the ownership of Google has slightly changed, one thing has remained constant, control, and ownership by its founders. Brin and Page still represent the major individual shareholders.

Also, as Google issued several kinds of common stocks, Brin and Page are the ones who – with their Class B common stocks – preserved their control over the company.

Even when back in the 2000s a “grown-up” CEO, Erick Schmidt was brought in, Brin and Page still had more than 50% of the voting power. The company has adopted several collective decision-making systems over the years. Yet Brin and Page remain in control of the future of the company.