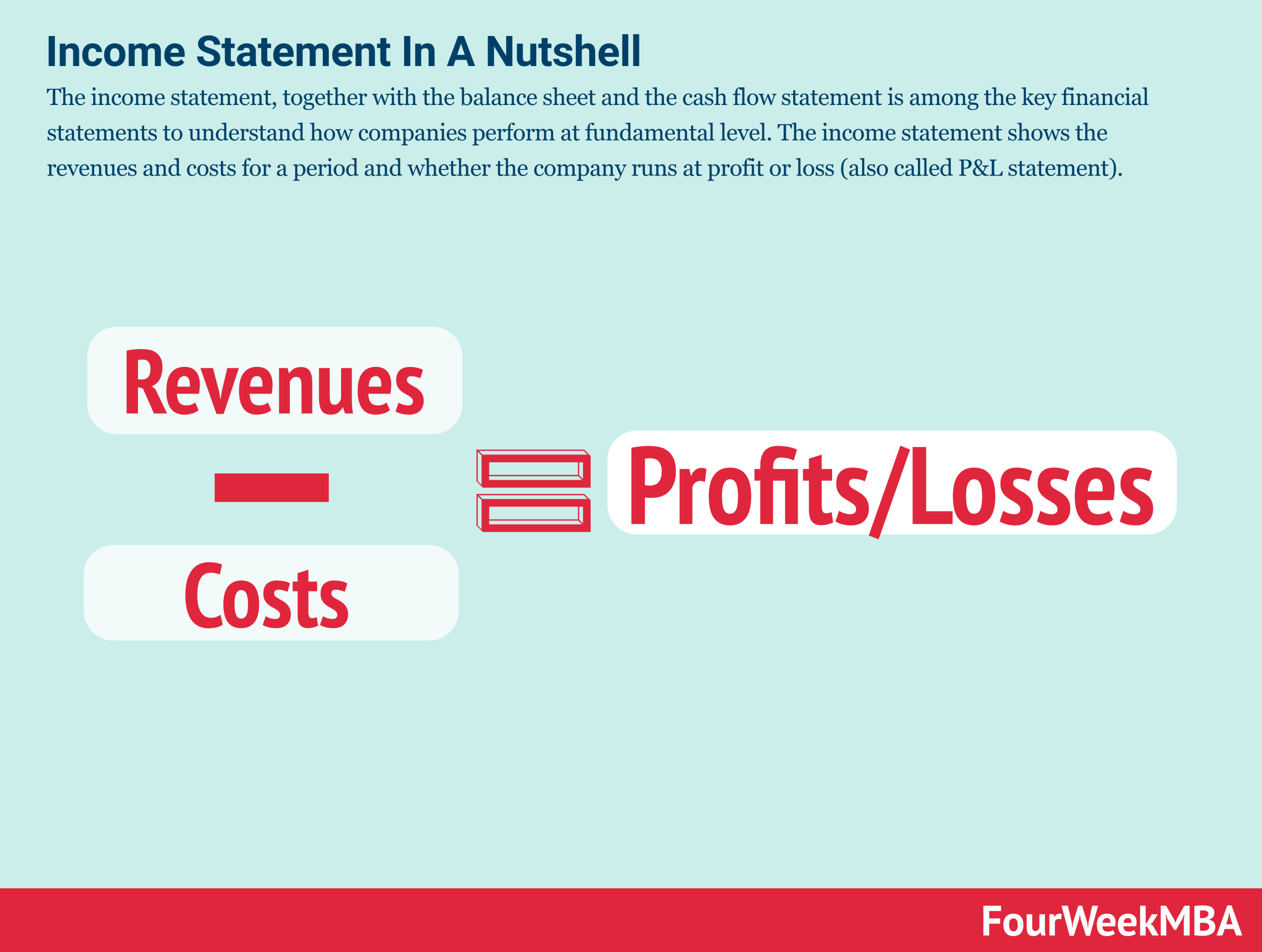 The income statement, together with the balance sheet and the cash flow statement is among the key financial statements to understand how companies perform at fundamental level. The income statement shows the revenues and costs for a period and whether the company runs at profit or loss (also called P&L statement).

When you look at your P&L, it will answer questions such as:

Let us see a real Income Statement below:

The Income Statement or Profit and Loss is a financial statement that shows the Profit or Loss incurred by an organization in a certain period of time. In this example we saw the P&L for the year.

In addition, this statement can be produced for the year, quarter, month. In regard to reporting purposes, instead, the P&L can be published every three or six months.

In the above example the P&L shows the Income as positive and the costs as negative. There are several methods to present the P&L:

Whether you decide to use the first or second method it is irrelevant, however what matters is consistency. In fact, if you use this method for your income statement you must use it across all the other financial statements you are building, to avoid confusion.

The first item of the Income Statement is Revenue. Imagine you have a bakery that sells donuts at $1 each and you sold 100 donuts, your total revenue for the day will be $100. Even though some customers paid with credit cards and the cash on your bank account will be deposited within thirty days you will still recognize $100 in Revenue.

How can we break down the Revenue?  See the diagram below:

They are generated by the sales coming from the core product an organization produces.

Example: Imagine owning a Pizza Store. The income generated by selling pizzas will be considered an Operating Revenue. In the example, the Operating Revenue formula is: price per unit times Units Sold (Volume). Indeed, if the price for your pizza is at $1 per unit, and 100 pizzas were sold, your revenue will be $100.

They are generated by sales coming from other sources.

Example: Imagine your Pizza Store business is going pretty well and you are generating cash in excess that can be invested in short term instruments such as bonds. Later, you go to the bank and buy $1,000 of T-Bills. This is a short-term debt obligation backed by U.S. government with a maturity of less than one year. Your T-Bills are due in six months, after that you will receive a simple interest of 2% annually or $10. The $10 you receive after six months is Interest Income or non-operating revenue, also described as incidental or peripheral income. However, on your balance sheet the interest income will be reported after the interest expense, almost like an offsetting. It is more accurate to report the interest income together with the other non-operating expenses. In this way the income generated by interests will not distort our Gross Income.

Indeed, the Gross Income divided by sales gives us the gross margins, which is a metric of operational efficiency.

The other main component of the income statement is cost/expense. There are many costs incurred by an organization. That is why most of the time can be very tricky to categorize them. In addition, cost categorization is crucial for any business, since they represent a big piece of the pie of any organization’s profits. If not managed properly can lead to big issues, ultimately to bankruptcy. In fact, there are several methods that can be used to classify costs, such as: Operating vs. Non-operating, Direct vs. Indirect, Variable vs. Fixed. It all depends by the perspective from which you look at them. Each one of these methodologies has the purpose of better understanding the cost structure of the organization. It is called “cost accounting”.

There are several types of expenses classified in the income statement. Let’s take into account three main categories of costs for reporting purposes:

This is the cost incurred to generate the revenue for the period in consideration. For example, a company who produces Smart Phones will have actual costs of production.

These costs, such as: Raw Materials, Wages associated to manufacturing, Overhead costs of running the factories, will be all considered COGS. These costs can be defined as direct costs as well.

After subtracting COGS from Revenue we get the Gross Profit.

This metric can be pretty useful in assessing the profitability and efficiency of the business when it comes to the manufacturing process.

These are all the costs not included in the COGS.

These costs are related to the operations of the business, such as: Advertising, salaries and wages, phone and Internet. However, they are not incurred to generate sales or at least in many cases it is hard to track the effect of this cost over the additional sale incurred by the organization.

After subtracting the operating expenses from Gross Profit we get the Operating Profit. This metric is useful as well to assess the profitability and efficiency of the business when it comes to the overall operations.

The remaining costs not included in the previous categories.

They are incurred outside the business operations.

Example: Imagine you own a Coffee Shop. Suddenly your sales plunge, you still need money to finance the operations, since the alternative would be closing the business. Therefore, you go to the bank and ask for a short-term loan of $4,000 that will be repaid in six months. The loan will carry a simple interest of 5% annually. Therefore, at the end of the six months, after paying the principle, you will eventually pay for the interest of $100. The money paid as interest will show under the Income Statement as interest expense for that period.

The revenue minus the operating and non-operating expenses for the period, give us the Net Income. This metric is very important to assess the overall efficiency and profitability of the business. We will see it in detail in Chapter

Whichever profits are shown on your income statement they do not tell you anything about cash.

It might be a shocking truth for who is new to Accounting. Indeed, this is not always true, especially if we operate under the cash basis, instead of the accrual basis principle.

On the other hand, most companies operate under the accrual principle. Thus, while the income statement and its bottom line, the net profits will tell us the story on whether the business model is viable.

It won’t tell us the story on whether the business is liquid (for that we’ll need the cash flow statement).

Example: Imagine you own a bakery that sold $1,000 in chocolate cakes in the first month. This event does not imply that you have $1,000 on your bank account. In fact, most of the time customers pay within 60/90 days. Therefore, half was received in cash; the other half was bought on credit. Thus, the first half ($500) is an actual cash inflow, the other half ($500), instead will be reported on your Balance Sheet. The transaction can be recorded like the following:

Imagine now, the bakery incurred $500 of expenses in that same period for raw materials; Half is purchased on account, and half paid on account. This implies a cash outflows for $250. The other half will show on the Balance Sheet, under Accounts Payable (Current Liability’s Section). See below:

Now that you know how an income statement works, you can use this knowledge to analyze real-world scenarios. Perhaps, you can understand when a profitability problem arises, where it’s coming from and with the framework above and this profitability framework guide you can identify the specific problems and address them.