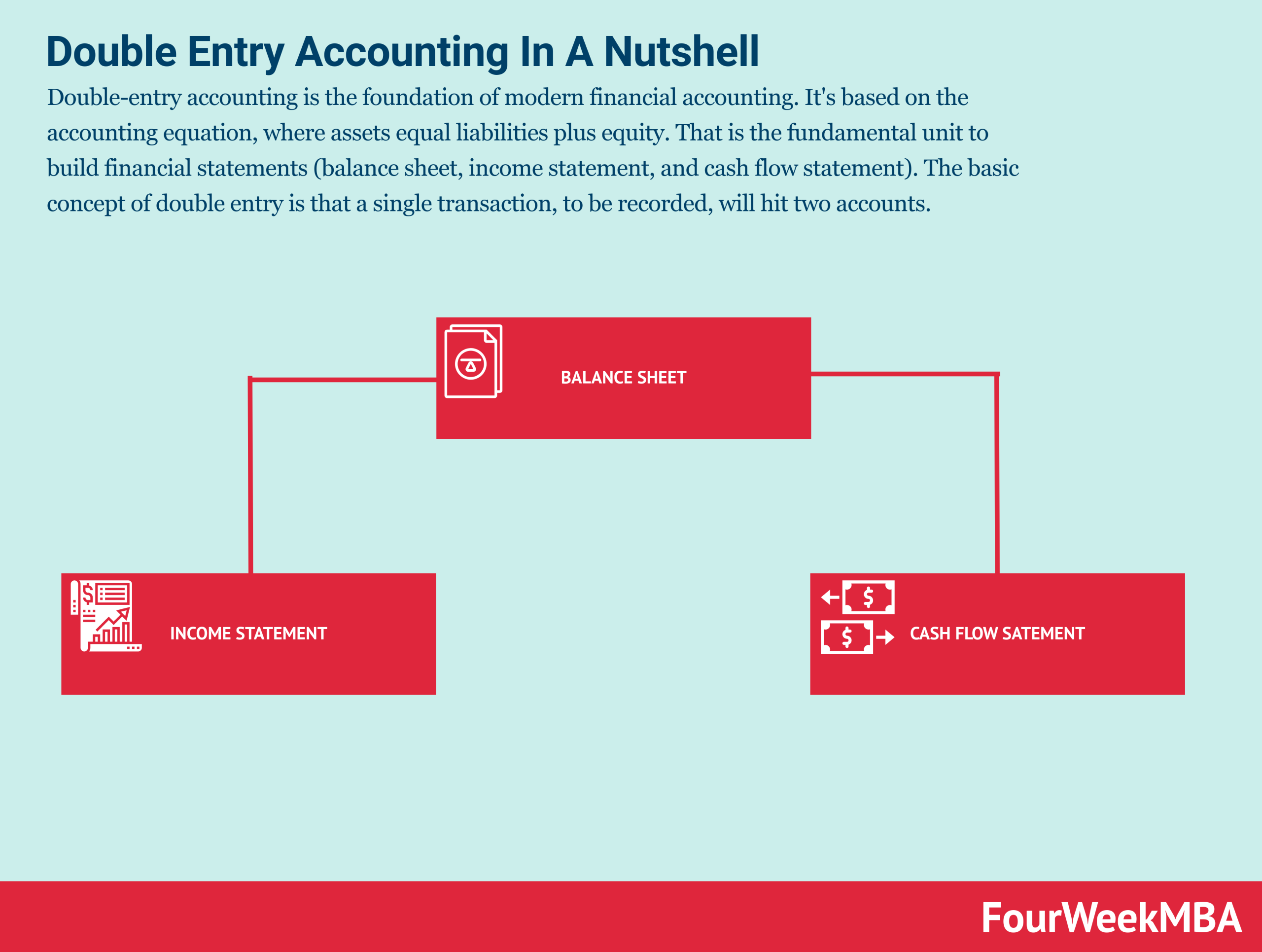 Double-entry accounting is the foundation of modern financial accounting. It’s based on the accounting equation, where assets equal liabilities plus equity. That is the fundamental unit to build financial statements (balance sheet, income statement, and cash flow statement). The basic concept of double entry is that a single transaction, to be recorded, will hit two accounts.

In a globalized world, where change happens so quickly that companies that existed for centuries – such as Lehman Brothers, founded in 1850, bankrupted in 2008 – just few things stick for centuries.

The current accounting system is one of the few survivors. Born in 1494, when a Venetian Merchant, Luca Pacioli, in his “Summa de Arithmetica, Geometria, Proportioni et Proportionailta”, described for the first time the double entry-system. This practical manual gave official birth to a system that is still used in current accounting.

Even people who hate accounting recognize the importance of it. If you either own a small business, or you are a CFO, CEO, COO, a common citizen, you have to understand accounting to recognize what is behind each one of the 14 trillions transactions per day, just in US.

Although, the fundamental accounting system hasn’t changed, the principle and rules applying today have been updated in the last century.

The general accepted accounting principles are standards and procedures used by organizations to submit their financial statements.

Today we have two main accepted frameworks, globally: GAAP and IFRS; in this chapter I will focus mainly on GAAP. Indeed, after the 1929 market crash,

American government felt the necessity to create a set of rules to discipline and conform the accounting system, and avoid what had happened. In the decade after the 1929 market crash institutions such as the Securities and Exchange Commission were created.

In 1934, the SEC, assisted by the American Institute of Accountants (AIA), started to work on the GAAP.

The AIA subsequently instituted an organism to specifically create these principles: The Committee on Accounting Procedure (CAP). Finally, the first set of GAAP was created and in 1973 and the CAP board was substituted by the Financial Accounting Standards Board (FASB).

From this work came out 10 basic principles, that are the foundation of the modern accounting system in US:

These principles are the “ten commandments” for the accountant. Keep them in mind.

They will guide you throughout the book. In addition, the accrual principle in practical terms states: “Revenues and expenses are recognized when occurred, independently from cash disbursement.”

This principle is crucial to build our main financial statements, in particular the Income Statement and Balance Sheet.

As any other language, the accounting system has its own. Indeed, in accounting in order for you to record a transaction you have to use the double-entry system.

Double entry means that each single transaction needs to be recorded twice, on the left side if debited and on the right side if credited.

For example, in the accounting world, when cash is debited, it means the cash on your bank account increased. Therefore, you received cash. I know it may sound counterintuitive, but this system was created five hundred years ago and it is the system today’s accountants use to record each single transactions.

The most effective way that accountants use to record each single transaction in the ledger is the T-Account. Although, most of the accounting Software today do it automatically, it is helpful to know how it works.

This visual aid helps the accountant to record a single transaction. Each account, in fact, has two sides, debit and credit.

Therefore, for a transaction to satisfy the accounting requirements has to be recorded on both sides. We will see that in the next paragraph.

Eventually, all the transactions collected for a certain period flow in the General Ledger.

Assuming you own a bakery that just sold $100 worth of biscuits. In the real world, it appears as a single transaction. Therefore you may think the same applies in the accounting world.

Instead, it is more complex since each single transaction implies two concurrent movements.

Accounts And Chart of Accounts (COA)

By defining Accounting as the language, we can define the accounts as the letters of the alphabet. Indeed, the accounts allow to categorize the bunch of transactions happened in a certain period, under the same umbrella.

The account is a record where all the debit and credit transactions are recorded. In the previous paragraph you saw already two of the main accounts, Assets and Revenue.

These accounts get organized under a Chart of Account (COA) or a list of items identified by an organization that will flow in the General Ledger (GL).

This will help the company to build reports such as: Balance Sheet (BS), Income Statement (P&L) and Cash Flow Statement.

Setting up a clear and consistent COA is crucial for the accounting department internal organization. Indeed, a disorganized COA can lead to many accounting mistakes and inaccuracies.

Below an example of best practice:

It is advisable, when setting up the accounts on the chart is advisable to leave some space between the sub accounts. For example, under assets we have the sub heading “current-assets”.

Give space between the sub-accounts, this allows you to set up new sub accounts when needed. For example, if two new cash accounts are opened, you can use the coding from 1111-1199.

Therefore, you have plenty of space to organize your COA. Setting up an organized COA and making sure everyone follows it rigorously in the organization is crucial.

Indeed, according to the coded generated, all the internal reports will be built. Such as historical AR, AP, P&L, BS, GL, CFS. If the coding is wrong or disorganized so your reports will be.

Glance at the main accounts

Financial statements help companies assess several aspects of the business, from profitability (income statement) to how assets are sourced (balance...