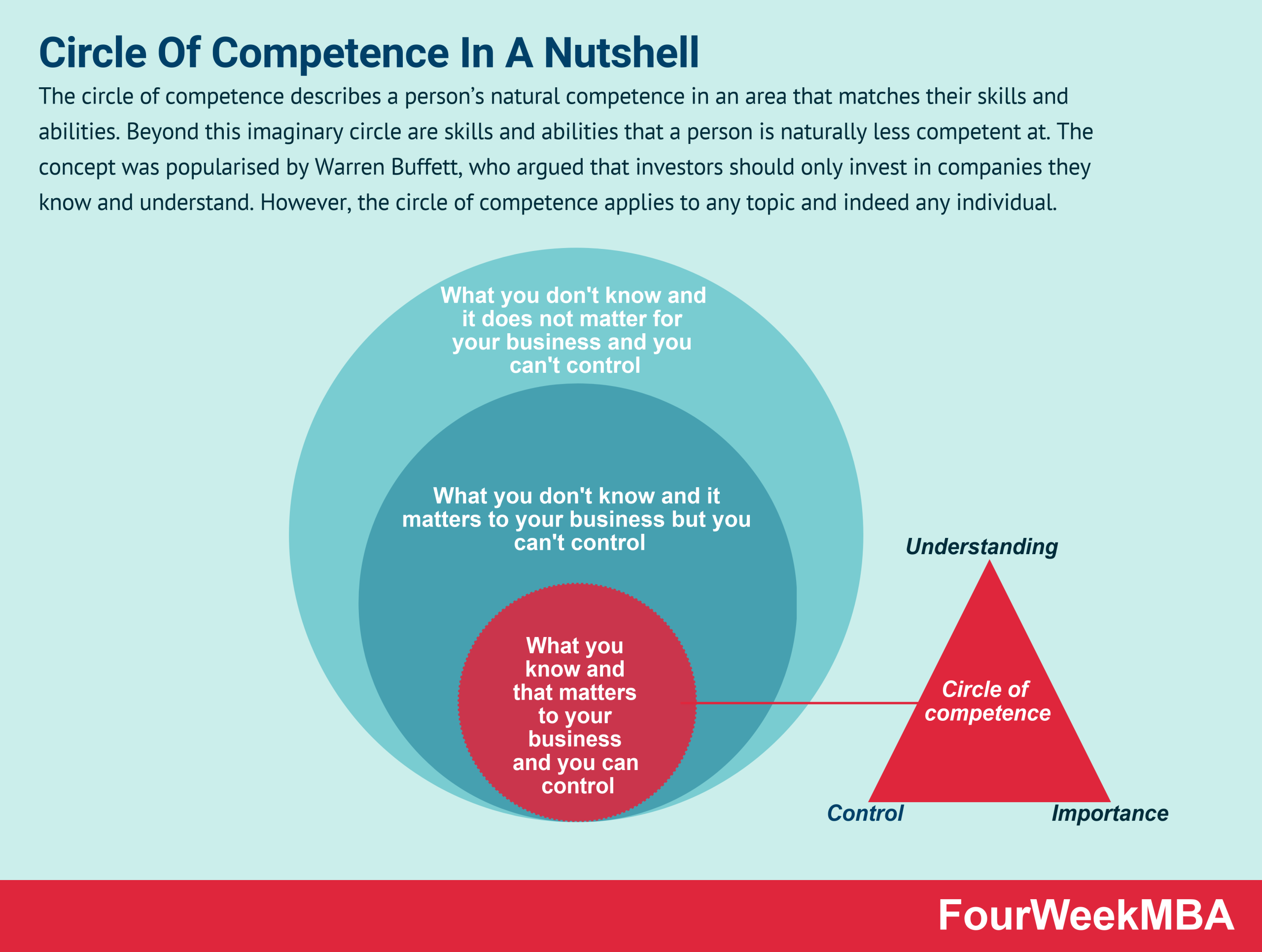 The circle of competence describes a person’s natural competence in an area that matches their skills and abilities. Beyond this imaginary circle are skills and abilities that a person is naturally less competent at. The concept was popularised by Warren Buffett, who argued that investors should only invest in companies they know and understand. However, the circle of competence applies to any topic and indeed any individual.

Understanding the circle of competence

Buffet’s strategy for success in life using the circle of competence relatively simple. Firstly, it is important that individuals know where the boundary of their inner circle is. Once the boundary has been established, it must not be crossed.

Buffet’s business partner Charlie Munger took the circle of competence one step further. He argues that a person must clarify their individual strengths and then play to them to have a competitive advantage. If a person not playing to their strengths comes up against a person who is, they will most likely lose.

However, it is a natural tendency for many individuals to deliberately step outside of their circles or attempt to broaden them. The circle can be expanded to an extent, but skills are usually industry-specific and non-transferable to other industries.

In business, this is why some organizations divest or outsource operations that don’t align with their core business.

Examples of the circle of competence

In a 1991 lecture to university students, Buffet reflects on the circle of competence of a Russian immigrant who built the largest furniture store in Nebraska. Buffet noted that this woman understood cash and furniture selling. Therefore, her circle of competence was furniture and specifically a talent for buying large amounts of furniture to turn a profit. Despite also being a business partner of his, Buffet noted that this woman had no interest in the stock market.

The circle of competence explains why. She was disinterested because she did not understand how it worked. Indeed, Buffet would later exclaim that “she wouldn’t buy 100 shares of General Motors if it was 50 cents a share.”

Furthermore, consider the Olympic athletes Michael Phelps and Hicham El Guerrouj. The first is a gold medal-winning swimmer, the second a gold medal-winning runner. Despite the athletes differing in height by 7 inches, the length of their legs is almost identical. Phelps with relatively short legs and a long torso that is perfect for moving through water. El Guerrouj has relatively long legs and a short torso that is perfect for long-distance running.

Each man operates within his circle of competence, and each has been highly successful. If the two were to switch sports and move beyond their circles, it would be highly unlikely that either would succeed to the extent they have.

Backward chaining, also called backward integration, describes a process where a company expands to fulfill roles previously held by other...