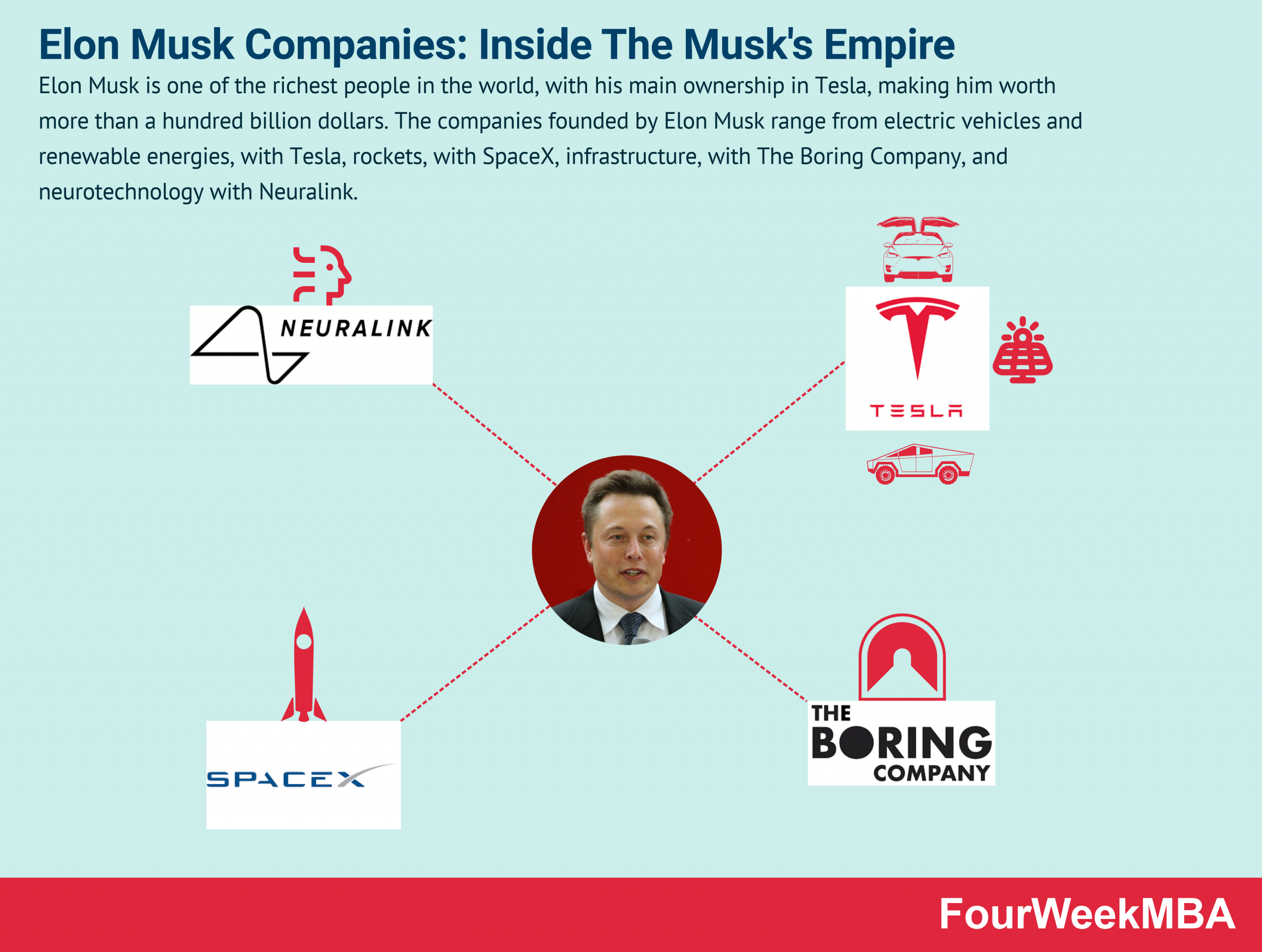 Elon Musk is one of the richest people in the world, with his main ownership in Tesla, making him worth more than a hundred billion dollars. The companies founded by Elon Musk range from electric vehicles and renewable energies, with Tesla, rockets, with SpaceX, infrastructure, with The Boring Company, and neurotechnology with Neuralink.

After a circuitous route from his home country of South Africa to the United States, Musk secured two internships in Silicon Valley in 1994. One was with an energy-storage start-up, while the other was a game developer company.

The following year, he got accepted into a Stanford University doctorate program but dropped out soon after. He instead chose to capitalize on the booming popularity of the internet and launched his own start-ups including Zip2 and X.com – a precursor to PayPal.

Musk has since gone on to found companies in the exploration, artificial intelligence, aerospace, green energy, and transportation industries. Let’s take a look at some of them below.

SpaceX is a space exploration company with a core focus on reusable rockets, space tourism, and satellites that can provide better internet connectivity. Musk created SpaceX out of a need to reduce transportation costs in space and ultimately, facilitate the colonization of Mars.

SpaceX has notoriously lofty ambitions and is never far from the headlines, but the company is making significant progress on its projects. The company recently won a $2.9 billion NASA contract to develop a system for landing astronauts on the moon.

Tesla is perhaps the company for which Elon Musk is best known. Through the popularization of electric vehicles, Musk is seeking to make green vehicles more affordable to consumers.

After rolling out the prototype Tesla Roadster in 2005, the company now offers an SUV, sedan, and sports car variant. Tesla’s pick-up truck, dubbed the Cybertruck, is due for production commencement in late 2021.

Musk has openly stated that he created the company because of the fear of a so-called “intelligence explosion” – or a hypothetical point where artificial intelligence growth becomes unmanageable and poses a threat to humanity.

In 2019, OpenAI transitioned from a non-profit to a for-profit organization. Soon after, it partnered with Microsoft after securing $1 billion in investment funding.

Musk founded The Boring Company on a whim after being stuck in Los Angeles traffic and lamenting the limitations of two-dimensional transport.

As a result, the company aims to construct underground tunnels that allow easier access from A to B. This includes traffic and freight movement, but it also encompasses better access for pedestrians and utility networks.

The Boring Company was infamous for randomly selling 20,000 flamethrowers to consumers. Critics suggest that the move was a non-dilutive capital raising or publicity stunt, or perhaps both.

Neuralink is a relative newcomer to Elon Musk’s suite of companies. Founded in 2016, the company employs neuroscientists to develop implantable brain-machine interfaces (BMIs).

This important work is intended to give those suffering from paralysis more independence – whether that be through increased mobility, communication, or self-expression.

In 2020 the company released a proof of concept in the form of a pig called Gertrude which had a small computer chip embedded in its brain. However, Musk accepts that it will be some time before the product is safe to use in people.