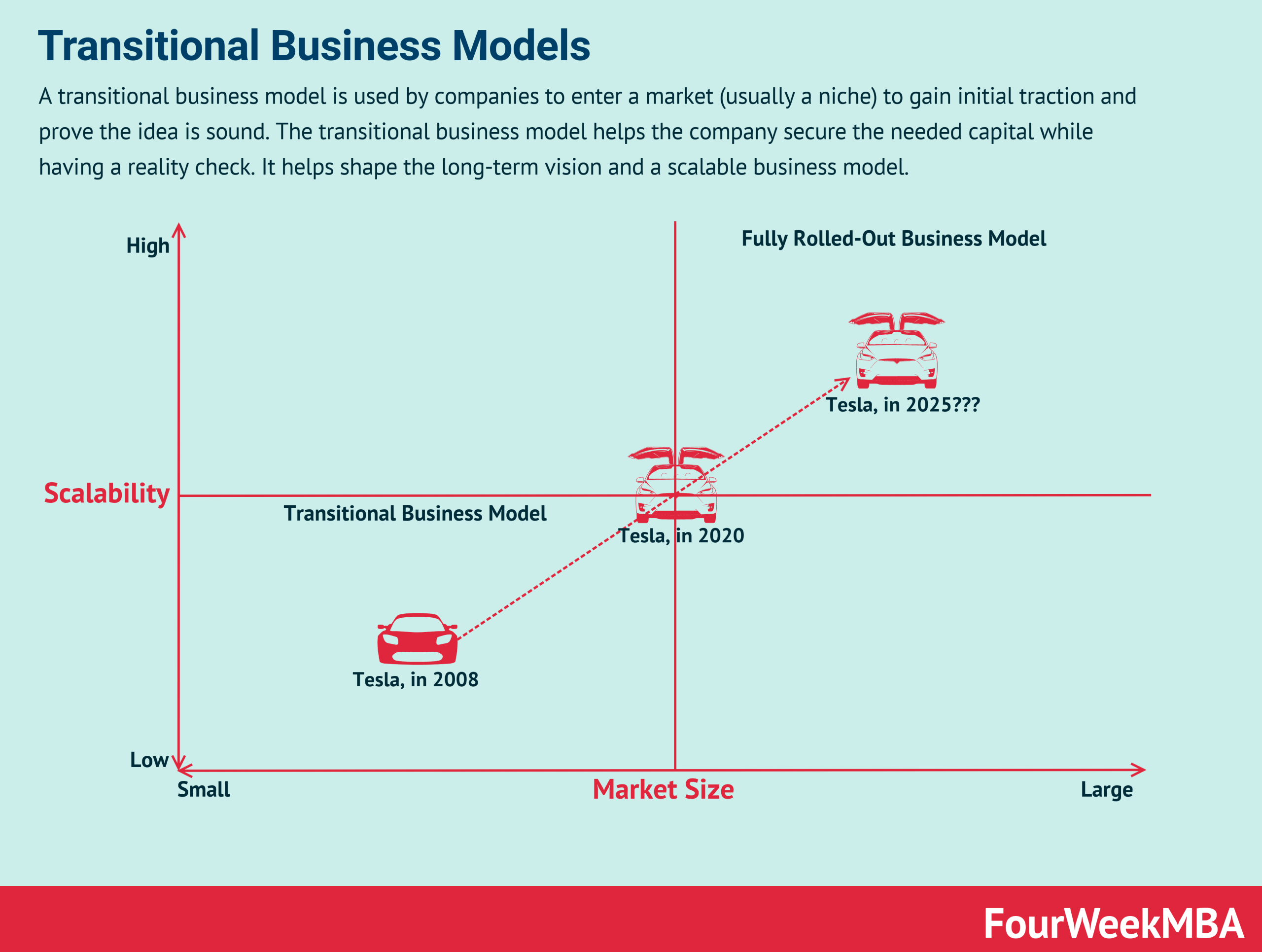 It was 2006, when Tesla, with his co-founder Martin Eberhard, launched a sport’s car which broke down the trade-off between high performance and fuel efficiency.

Tesla, which for a few years had been building up an electric sport’s car ready to be marketed, finally pulled it off.

As Elon Musk would explain Back in 2012: “In 2006 our plan was to build an electric sports car followed by an affordable electric sedan, and reduce our dependence on oil…delivering Model S is a key part of that plan and represents Tesla’s transition to a mass-production automaker and the most compelling car company of the 21st century.”

Tesla had to find an effective market entry strategy that would enable it to validate the market.

The transitional business model in a nutshell

When companies like Tesla start to roll out their business models, they go through a phase of what I like to call the “transitional business model.”

A transitional business model is a model used for traction, in a market that doesn’t have to be big, or initially scalable.

If we break down business strategy in three core parts:

A transitional business model is a model that will serve the purpose of gaining initial traction and market validation.

Therefore, it will help for the sake of the market entry and it will help also shape the long-term vision as it gets rolled out.

A transitional business model might seem obsolete in hindsight, yet that is the same model, which proves the viability of the idea while keeping it alive.

A transitional business model might not be scalable. Yet, that is the model that will help create an initial positioning, and get the funding (revenues, or capital) needed to roll out the scalable business model.

A transitional business model might not have a long-term vision, and yet it will help shape it.

Thus, a transitional business model works in the short-term to validate the market, to enable the technology and its ecosystem to mature while still having a reality check.

This is the core premise of a renewed business playbook, that doesn’t just rely on growth capital. It moves by (also) securing growth capital, but then it validates the market, step by step.

There are plenty of examples of transitional business models:

Strategies take years to roll out entirely, and they might seem trivial only in hindsight. A transitional business model helps validating a strategy, before it starts to get rolled out.

As strategies take years to fully release their potential. Before committing a whole business to the desired path, a transitional business model helps to understand whether that is the right direction.