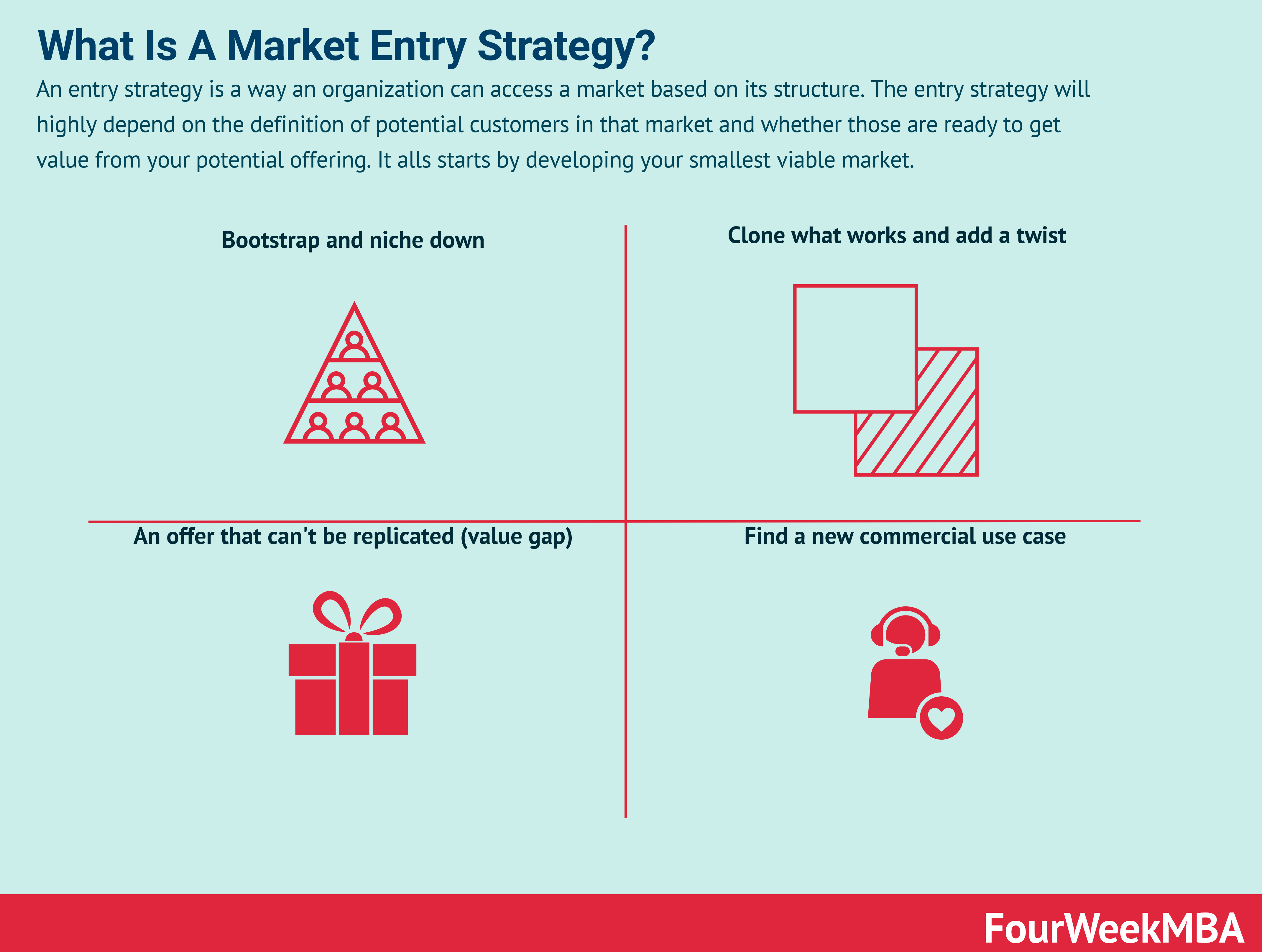 An entry strategy is a way an organization can access a market based on its structure. The entry strategy will highly depend on the definition of potential customers in that market and whether those are ready to get value from your potential offering. It alls starts by developing your smallest viable market.

Let’s start with some basics of classic economics.

While the definition above is helpful to get us started. There is a more practical way we can define market types.

You can read the full guide on the market types below. In the next paragraphs, we’ll see how to tackle each market and what entry strategy you can use.

Read: What Are Market Types? Four Types Of Markets To Build A Business

Existing market: bootstrap and niche down

In those cases, some powerful entry strategies are:

In short, in an existing well-defined market, while there might be many ways to enter. An effective strategy is to identify a subset of customers (a niche) which you can target and provide the most value.

Thus, it’s possible to start by bootstrapping your business:

Identifying a niche, is a key element to get started with a small set of potential customers able to give you feedback as you grow.

Sometimes whether to start from a niche or microniche is a matter of understanding how competitive and saturated is an existing market.

As a rule of thumb, a market that is extremely saturated will require you to drill it down until you find the smallest customer base to kick off your business.

For instance, if you’re starting today an online bookstore, sure you can start by making it the “everything store” (oops that seems it was already invented two decades ago and it is called “Amazon“) but that might be soon doomed to failure.

Instead, you want to be very specific. Something like, “I’ll start an online bookstore with the most curated books you can find about biographies from entrepreneurs of the 18th century.”

Read: Microniche: The New Standard In The Era Of Dominating Tech Giants

Resegmented market: craft a value proposition based on the key players’ weaknesses

Imagine you enter an industry dominated by other players. For instance, what about starting a search engine today? Or also back in 2008?

That doesn’t sound like a brilliant idea unless you know what your search engine can offer which Google can’t.

That is how DuckDuckGo started in 2008, when Google was already the dominant player in the search industry, together with a few other giants:

DuckDuckGo is throwing the user’s data on the fly. Would Google’s business model be sustainable in the first place if it was to throw away the users’ data?

Probably not, and that is what makes DuckDuckGo value proposition clear: “I give you what Google can’t.”

Thus, when entering a resegmented market, where there might be an opportunity at the low-end of this market (DuckDuckGo started in 2008, when privacy concerns were still minor, compared to these days):

New market: figure out a commercial use case

Opening up a new market seems to be the hidden dream of many entrepreneurs. That’s because, for a while, that new market might be extremely profitable, and with low competition (the so-called first-mover advantage).

Yet opening up a new market, not only is a risky move, but if that market holds up, new companies might quickly replicate what you’re doing, thus making your first-mover advantage turn in their favor (Google was a latecomer in search, and so Facebook was a latecomer in social media).

But how do you enter (actually create and define) a new market? In that case, it’s all about finding the commercial use case, which is initially big enough either to develop an initial, potential customer base (made mostly of innovators).

In this case, it makes sense to look for funding, because, potential investors can validate your idea in the first place (if they’re willing to put money it might be the first sign of a potentially worth it commercial application).

Or ask “is there a way for me to test the idea without making it technically complex?”

For instance, let’s say your idea is to start a software company, yet developing that would require hundreds of thousands of dollars.

That would give you the option to expand the project (and its technical requirements) and ask for funding based on a concrete idea backed up by data from potential customers.

When some business models have proved viable in specific industries, instead of starting from scratch, why not take what exists out there and apply it in a new geographical area?

Another example is how Baidu took advantage of the proven model of Google to dominate in China. Baidu‘s founder in 2000 after gathering financing from an early-stage venture capital firm launched in China. Today Baidu has most of China’s search market share.

Also, when applying and modeling what works you need to add a twist, which is often what makes the business model sustainable. Copycat alone won’t work for long.

Today, and already at the time, Baidu was a company that had its own specificities given the fact the established model for the search was getting developed in the western context.

A digital business model might be defined as a model that leverages digital technologies to improve several aspects of an...