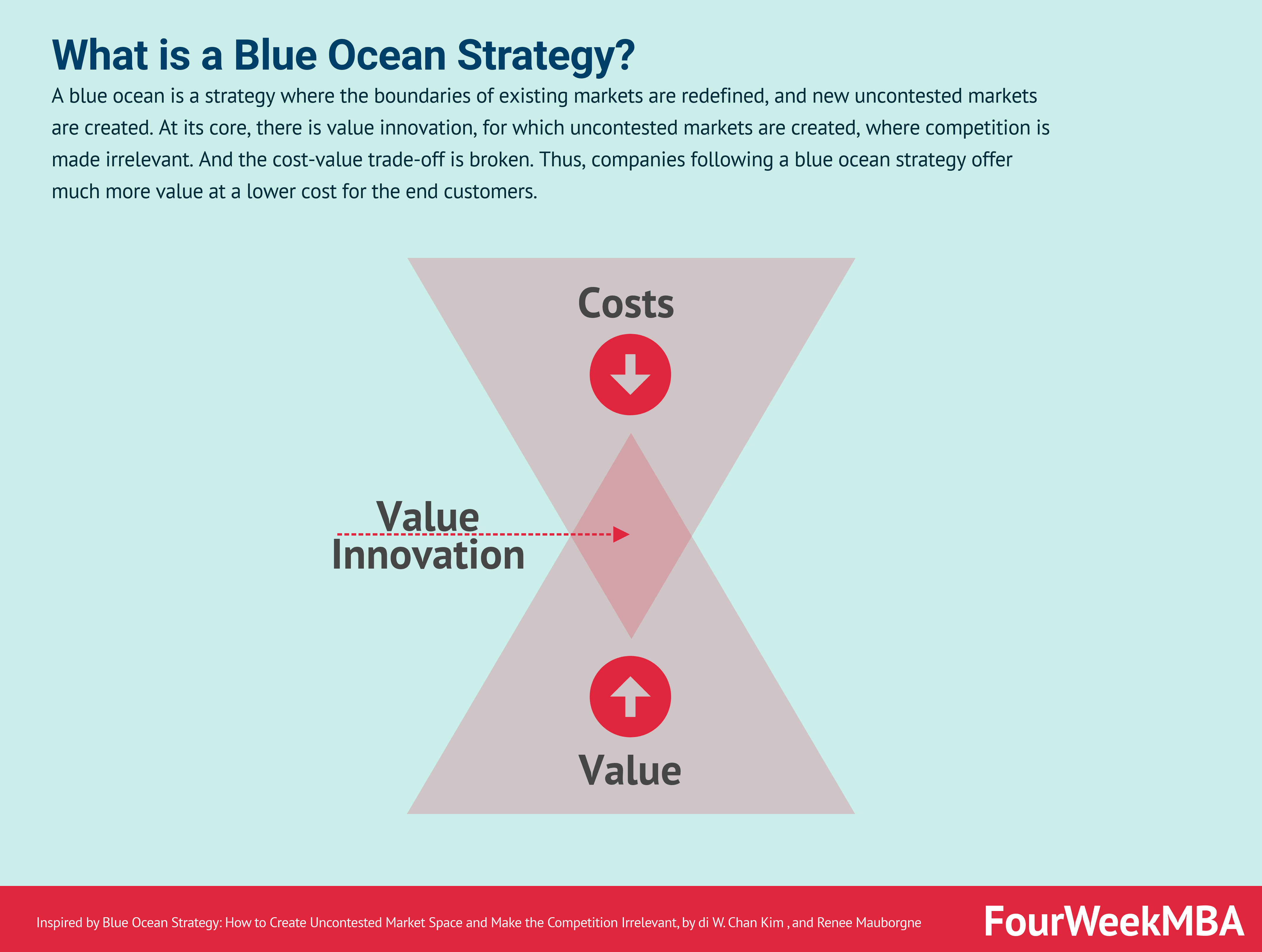 A blue ocean is a strategy where the boundaries of existing markets are redefined, and new uncontested markets are created.

At its core, there is value innovation, for which uncontested markets are created, where competition is made irrelevant. And the cost-value trade-off is broken. Thus, companies following a blue ocean strategy offer much more value at a lower cost for the end customers.

The blue ocean strategy is the fruit of the homonym book, and research conducted b W. Chan Kim and Renee Mauborgne.

To understand and appreciate what makes a blue ocean strategy so powerful, it makes sense to look at a place called the red ocean.

A red ocean is a place where competition is the norm. Players in a red ocean are all fighting for the same contested space.

This is usually an accepted market, with well-defined boundaries and where players either provide a service at a lower cost. Or they differentiate it through higher quality by making that service less accessible.

It is a place where rules are well defined as well, and everyone plays according to them. Innovation is marginal, and even if that happens, it is not a breakthrough.

By nature, a red ocean, as it is a very crowded space, it is also a place where profit margins are narrow, and products and services are commoditized. And where differentiation mostly happens on pricing.

The anatomy of a blue ocean

A blue ocean is any industry that is not yet defined, where boundaries are still to be built and where competition doesn’t exist. There is a new demand ready to be molded and captured. And the rules of the game are still to be written.

The new market forming within a blue ocean has exponential growth potential, and it is ready to grab to those players able to see it. Those creating this new market will be able to tap into a new demand, which will have them enjoy higher margins and lower competition.

To understand the blue ocean strategy, it is essential to retrace how such strategy reinterpreted the process of value innovation in business.

In the old days, companies would usually compete by either creating higher value for customers, thus charging more. Or by creating a more standardized value proposition, leveraging on operational efficiency, and offering decent value for a lower cost.

That was the old days. Digital businesses today can break this trade-off and innovate by offering more value at a more reasonable price. That is the whole point of companies like Amazon.

The new era of more value at lower costs

If you look at the core principles of Amazon business model design, you’ll notice that its flywheel starts from customer experience, which can be summarized as more selection of items, coupled with a fast delivery service, and the ability to find almost anything.

More value at a lower cost is the key to understand how to build a successful digital business model.

In this context, value innovation is built around the break down of the cost-value trade-off. Thus a successful business model needs to be offering more value at a lower cost.

That’s the key to a blue ocean strategy.

An alternative to the Blue Ocean Strategy view

In a saturated web, where most verticals have become highly competitive and commoditized, a Blue Ocean Strategy has become much more complex to execute. Also, while it might be possible for companies or individuals with massive resources to create and define new markets.

For those companies that have to bootstrap their way through, I argue that a different approach might work out. This approach I called Blue Sea where rather than looking for a new ocean, we can find a small space within the Sea, which is so small, that is unreachable by the existing waves, and not much interesting to sharks.

That is going to be the place to kick off the business, and the entrepreneurial lab to validate your business idea and make your business gain traction and gather the needed resources to evaluate options to scale later on. This is at the core of the Blue Sea Strategy.

And it alls starts by searching for your Minimum Viable Audience.

A value chain innovation doesn’t just happen anymore for increased convenience and reduced price, it also comes with the build-up of ecosystems that help this value to be delivered in the first place.

To gain a bit of context, new uncontested markets – eventually turned mature –  have born and evolved thanks to the creation of what we can call business platforms.

Business platforms are the combination of the physical, software platforms where consumption happens. But also the place where an entrepreneurial ecosystem forms.

The classic example is that of Apple’s ability to build successful products, that only in part is the cause of its success.

Those products, indeed, come coupled with a platform business model, that incentivized third-party developers to build their applications, that can be plugged into Apple’s devices, thus enhancing their capabilities.

This is the core of sustained success. And the company who manages to build the next business platforms, or surf them, might, for a while taking advantage of those uncontested markets.

Yet as they mature, they will need to be on the lookout for the next platform that will take over.

Below a set of other business frameworks, you can use to improve your business acumen.

Expand, extend or stretch your business model with the FourWeekMBA Growth Matrix

The 5 Whys method is an interrogative problem-solving technique that seeks to understand cause-and-effect relationships. At its core, the technique...