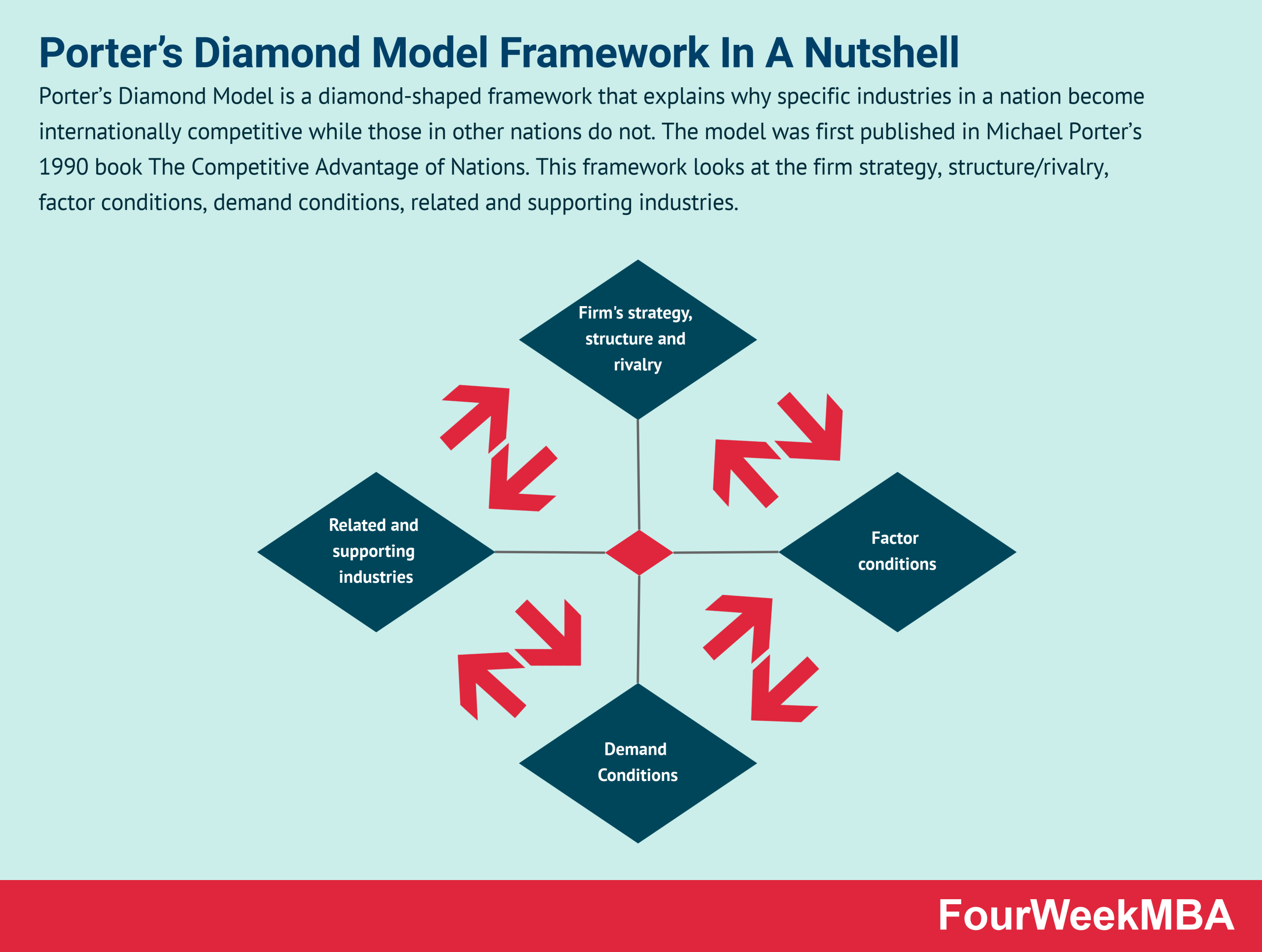 Porter’s Diamond Model is a diamond-shaped framework that explains why specific industries in a nation become internationally competitive while those in other nations do not. The model was first published in Michael Porter’s 1990 book The Competitive Advantage of Nations. This framework looks at the firm strategy, structure/rivalry, factor conditions, demand conditions, related and supporting industries.

However, Michael Porter argued that this model was a rather passive summary of economic potential and that far from creating sustained growth, the aforementioned factors may undermine any potential competitive advantage.

Instead, he proposed that four other characteristics could accurately predict whether a nation produced organizations that were competitive on the international stage. These four characteristics give Porter’s model the diamond shape for which it is known, and they are explained in the next section.

This characteristic encompasses how companies are structured and managed. It also includes company objectives and the presence of competitive rivalries, if applicable. Rivalry is particularly important because it forces companies to innovate, better preparing them for the international market.

For example, German carmakers BMW, Mercedes-Benz, and Audi would not have become globally successful brands without the intense competition they face inside their native Germany.

Factor conditions are more basic in nature and refer to unskilled labor, natural resources, and infrastructure. However, Porter argued that more advanced factor conditions such as skilled and specialist knowledge and access to capital were more important to competitive advantage.

Most large companies are only as successful as their supply chains. Indeed, most are dependent on alliances and good relationships with suppliers to make cost savings that can be passed to consumers. Nations with high concentrations of large, innovative companies who operate close to each other facilitate the spread of innovation.

For example, the cluster of tech companies in Silicon Valley, California, facilitates innovation because of the proximity of innovative and often supportive companies.

Given that Porter’s Model assesses competition in the relatively broad context of nations, it has been subject to criticism.

Other frameworks by Michael Porter

Porter’s Generic Strategies In A Nutshell

In his book, “Competitive Advantage,” in 1985, Porter conceptualized the concept of competitive advantage, by looking at two key aspects....