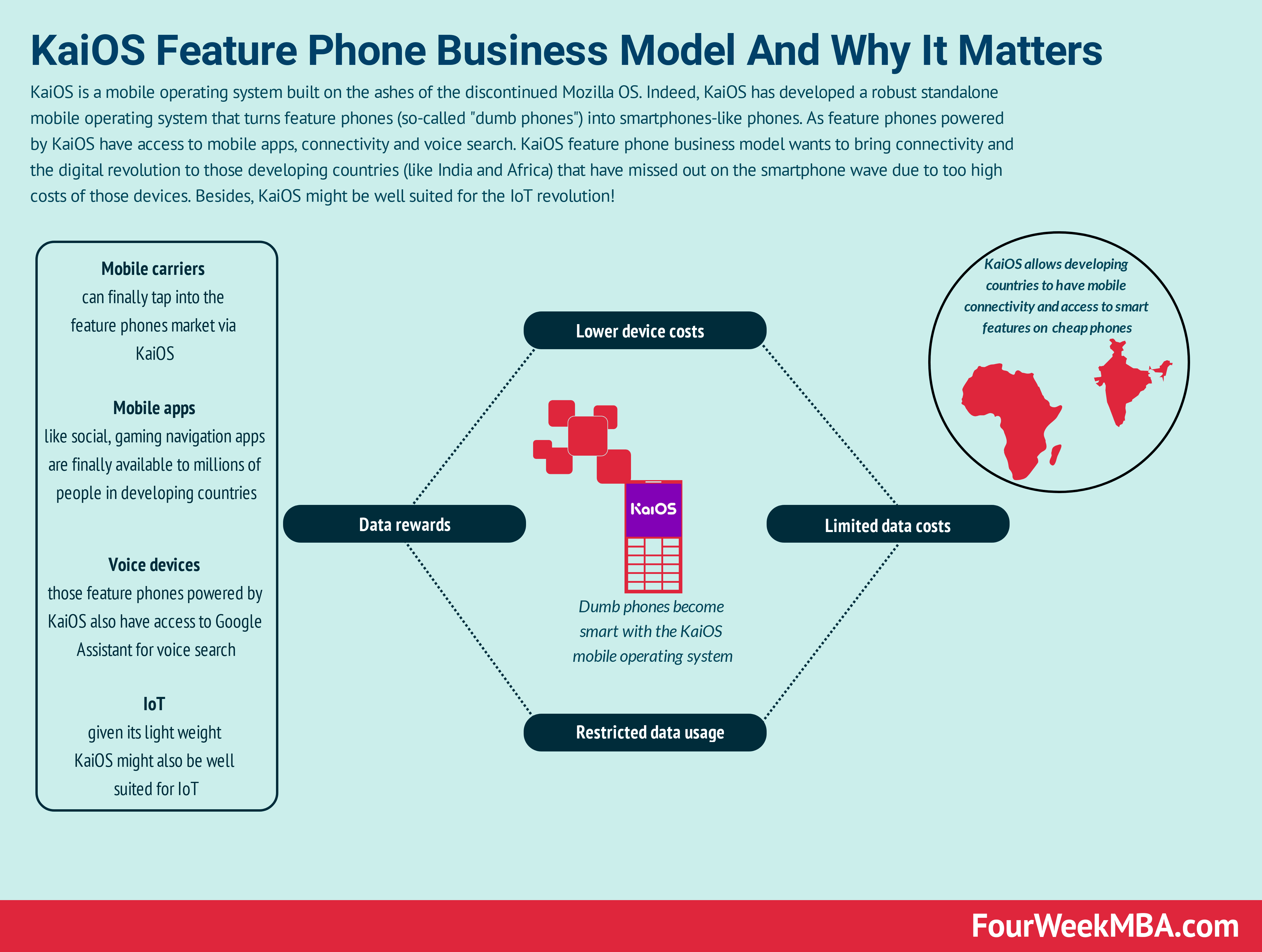 As feature phones powered by KaiOS have access to mobile apps, connectivity and voice search. KaiOS feature phone business model wants to bring connectivity and the digital revolution to those developing countries (like India and Africa) that have missed out on the smartphone wave due to too high costs of those devices.

Besides, KaiOS might be well suited for the IoT revolution!

A few years back the Mozilla Community created B2G OS (Boot to Gecko), a standalone operating system. That project was discontinued but being created by Mozilla; all its code was open source. From that open source code starts the story of KaiOS.

In 2016 A San Diego-based startup, KaiOS started its take over of the mobile operating system market (in particular India) with a “fork.” In GitHub (a software development platform) a fork is the copy of a repository (a digital directory where you can access a project and all its versions).

Indeed, KaiOS gained a 15% market share in India in a very short period according to DeviceAtlas. A primary reason for Its popularity was the success of the “Jio phone” which came prepackaged with KaiOS.

Fast forward 2018, Google invested 22 million dollars in KaiOS and for a few good reasons. But before we get to that, let’s look at KaiOS and what makes it so unique.

A glance at the feature phone market

A feature phone is usually defined as a phone that lacks the capabilities of a smartphone. In short, that is the phone we knew before smartphones became the norm:

While those feature phones might well be defined as “dumb phones” they are not such – potentially – anymore. Indeed, what makes KaiOS such an interesting project is that with its mobile operating system can transform a dumb phone into a smartphone.

This makes the feature phone market quite interesting, but there is even more to it in KaiOS case. Let’s first look at this mobile operating system.

KaiOS in a nutshell

As pointed out on KaiOS blog:

At Kai, our goal is to bridge the divide between the billions of people in emerging markets who still don’t have basic internet access, as well as those in more established markets that do. As a result, we will make internet access available to all, regardless of whether people are uncomfortable with advanced technology, don’t own a smartphone, or can’t afford one.

That’s where and why KaiOS started from. KaiOS, therefore, has the objective of allowing people that can’t afford a smartphone to have the same basic features, which will give people using feature phones apps that are also available on smartphones, and even access to voice search.

As pointed out by the KaiOS team, its operating system, while based on Mozilla discontinued project it “has been developed into something much more robust and expanded than the original Firefox OS. Think of us as distant cousins, not siblings nor children.“

The critical ingredient of KaiOS is that it brings “support of 4G/LTE, GPS, and Wi-Fi, as well as HTML5-based apps and longer battery life, to non-touch devices.“

In other words, KaiOS has an optimized user interface which even though brings smart features to “dumb phones” it does that by requiring little battery, memory than another operating system while bringing to those feature phones social media, navigation, and other apps similar to a real smartphone!

Where does the name KaiOS come from?

As reported on KaiOS website, “Kai” originates from the Chinese word for open: 开 (kāi).” Thus, the “open operating system” in the sense of giving final access to billions of people to the digital revolution.

In short, KaiOS brings connectivity to phones that otherwise would have been cut out of this revolution. Therefore, more and more people in emerging and developing countries will finally have that access.

According to gs.statcounter.com KaiOS has become the third mobile operating system worldwide:

Its success can be primarily attributed to the success of the JioPhone, a feature phone which sold pretty well in India. This partnership was further sealed when in 2018, Reliance Retail, the consumer goods arm of Reliance Industries bought 16% of KaiOS.

As reported on indianexpress.com:

Highlighting the fact that JioPhone is already a meaningful contributor Reliance Jio’s growth, a recent survey estimates that total JioPhones sold so far could be close to around 40 million. A survey by Credit Suisse on the Indian Telecom Sector said as suggested by recent media reports, JioPhone had 36 per cent share of the feature phone market for January-March quarter of 2018 on an expanded market base.

The Jio Phone partnership has proved quite successful for several reasons, and the primary reason is given by the fact that KaiOS makes available in Jio Phones apps and features available on smartphones. Another compelling reason is voice search!

An interesting aspect of dumbphones powered by KaiOS is the ability to easily activate the Google Assistant and its voice search capabilities:

This made KaiOS quite appealing to Google!

In 2019, KaiOS expanded its integration with Google. As highlighted by KaiOS, “KaiOS users will enjoy deeper integration of Google’s services like Google Assistant and Google Maps, and can now access YouTube for the first time on their smart feature phones.”

The integration enabled some key features to enable voice search on feature phones. As Google highlighted, “over the coming months, we’re launching Voice Typing on KaiOS, so the Assistant can help translate speech to text in a natural, convenient way.”

As reported on KaiOS blog by Sebastien Codeville, CEO of KaiOS Technologies after the Google $22 million Series A round:

This funding will help us fast-track development and global deployment of KaiOS-enabled smart feature phones, allowing us to connect the vast population that still cannot access the internet, especially in emerging markets

Before we draw some conclusions, let’s look at why KaiOS business model makes sense.

The value proposition of this business model starts with two key players:

KaiOS solves both those issues by:

This happens because a substantial user base (those that own feature phones) is still stuck on 2G networks, which makes it hard for them to sell other lucrative data plans on mobile services.

According to KaiOS, this business model goes through a few steps:

If this business model works out this might finally allow mobile devices, internet access, mobile apps, and mobile carriers to penetrate at a global level.

Let’s look now how this might fit into Google masterplan.

As KaiOS device carry a Google Assistant, it will be easier for Google to consolidate its position in voice search in the developing world.

As the feature phone market is growing at a fast rate, this will allow Google to have its apps featured in those phones, which in turn will guarantee access to millions of users in those developing countries.

KaiOS as an avenue toward IoT

KaiOS is also well suited as a potentially disruptive operating system toward IoT. As it makes of its ability to work on devices that require limited connectivity and low consumption of both data and battery.

This might make it easier for KaiOS to become the predominant operating system for objects that surround us and that might give rise to the IoT revolution. If Google were able to put its hands on that, it would allow the company to conquer the next stage of the web.

By July 2020, Google signed an agreement to invest $4.5 billion in Jio Platforms, owned by the Indian telecommunication giant, Reliance Industries.

This came after Facebook had invested $5.4 billion, less than a month before to gain traction in India.

As Google highlighted, “Jio, for its part, has made an extraordinary contribution to India’s technological progress over the past decade. Its investments to expand telecommunications infrastructure, low-cost phones and affordable internet have changed the way its hundreds of millions of subscribers find news and information, communicate with one another, use services and run businesses.”

More precisely this deal goes beyond KaiOS investment. Where Google has started to build its footprint in India via KaiOS. Through the Jio Platforms’ deal,  “Google and Jio Platforms have entered into a commercial agreement to jointly develop an entry-level affordable smartphone with optimizations to the Android operating system and the Play Store.”

Moving both upstream and downstream

As pointed out in data supply chains, this move is a consolidation of its integrated chain of data. Where Google devices reach millions if not billions of people this creates a strong supply chain of data, connected to mass consumers.

Thras.io Business Model In A Nutshell

Thras.io follows an acquisition entrepreneurship template, by surfing the Amazon third-party ecosystem. The company acquires Amazon sellers' businesses and it...