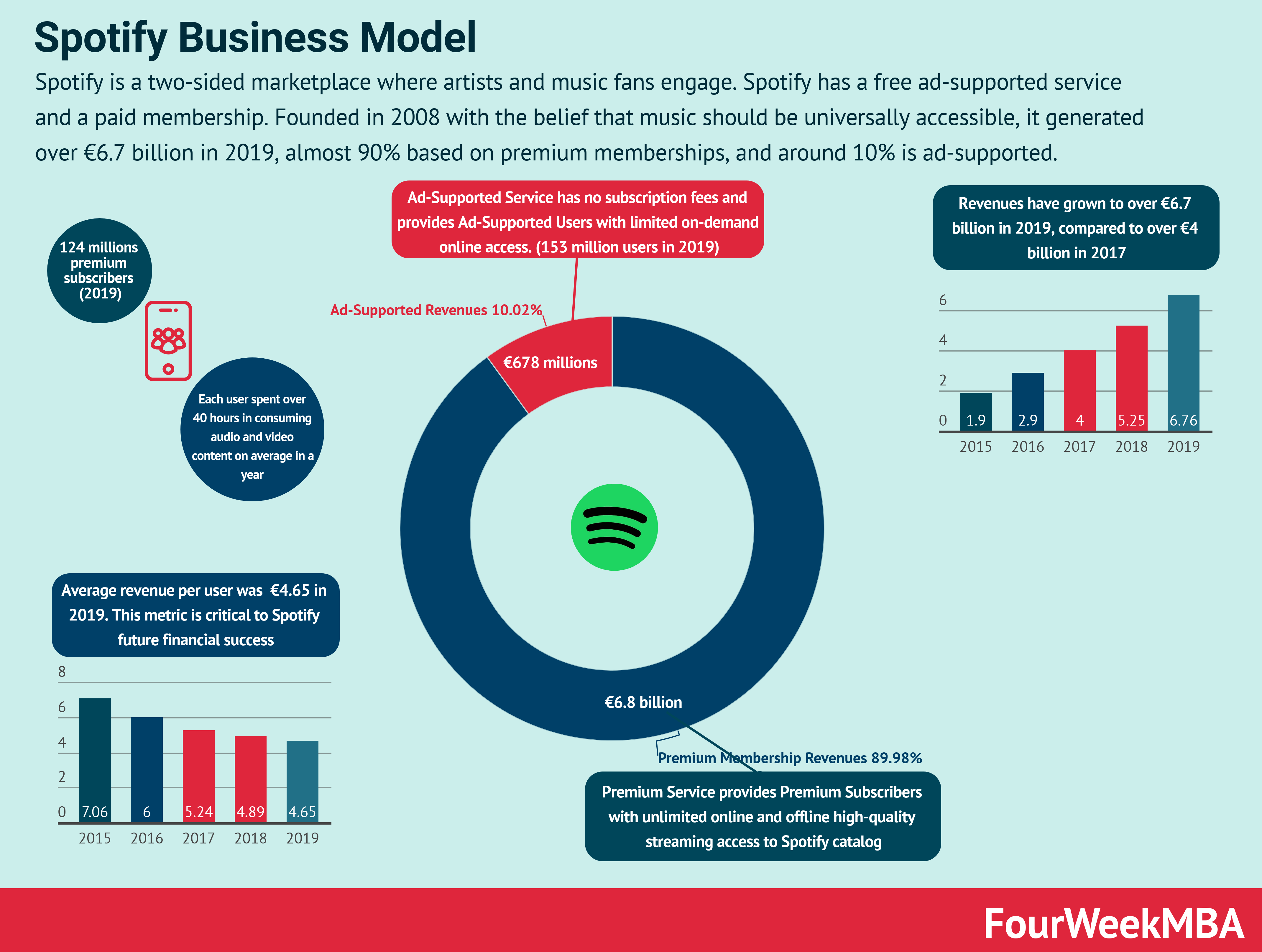 Spotify is a two-sided marketplace where artists and music fans engage. Spotify has a free ad-supported service and a paid membership. Founded in 2008 with the belief that music should be universally accessible, it generated over €6.7 billion in 2019, almost 90% based on premium memberships, and around 10% is ad-supported.

Spotify is a place where both artists and people who want to listen to music can get together. When Spotify launched its service, back in 2008, the music industry wasn’t living a good moment. That was also due to the growth in piracy and digital distribution, which were allowing people to listen to music, while artists were losing control of monetizing their music.

In addition to that Spotify was founded on the “belief that music is universal and that streaming is a more robust and seamless access model that benefits both artists and music fans.“

This mission is critical as it also drives the business model behind Spotify. Indeed, as a two-sided marketplace, Spotify’s success depends on its ability to match the music offered by artists with their music fans’ preferences. The more this match is successful, the more Spotify will be able to retain and grow its membership base, thus substantially increase its revenues.

Spotify key partners and its challenge to gatekeepers

The principal partners of Spotify are:

Its primary challenge is to fight the old model where artists had to be signed to a label to have access to a recording studio, mainly when the radio was critical to achieving success. Spotify’s mission is to allow artists to produce and release their own music.

Spotify monetization strategy: the ad-supported service as a funnel for

Spotify monetization strategy is based on two primary services:

The Premium and Ad-Supported Services work independently yet they are critical to each other. The ad-supported service is what allowed Spotify to scale and it is also the crucial ingredient in the paid members’ acquisition in Spotify.

Premium Services, include standard plans, Family Plans, and Student Plans. The aim of each package is thought to appeal to Users with different lifestyles and across various demographics and age groups.

Also, in some markets where subscription services are not yet the norm, Spotify offers prepaid options.

Spotify counted over 71 million Premium Subscribers in 2017. Those members are activated via several marketing channels:

On the ad-supported service, Spotify monetizes from the sale of display, audio, and video advertising delivered through advertising impressions.

The revenues comprise primarily the number and hours of engagement of Spotify Ad-Supported Users and their ability to provide innovative advertising products. A key ingredient is Spotify demographic segment primary made of users between 18 and 34 years old, which represents a massive opportunity of monetization via advertising:

The Spotify business model is still evolving. Even though its revenues primarily come from paid members, the company might try to push more on its ad-supported services, and enter more and more in the digital advertising space. Therefore, a business model that is subscription-based might become advertising based in the long run. As of now (2017) over 10% of Spotify revenues come from ad-supported services, while the remaining, about 90% comes from membership services.

Each company needs to tap into a distribution strategy that guarantees a stream of users to have a sustainable business model. Much of Spotify costs are based on royalty and distribution costs related to content streaming. Those are paid to specific music record labels, publishers, and other rights holders, for the right to stream music to Spotify Users.

Of course, the revenue generated on lower-priced plans (such as the Family and Student Plan) carries a lower cost compared to other plans.

The acquisition costs also depend on targets which can include measures such as:

Understanding the metrics that an organization looks at to evaluate the growth of its platform, in a way also highlights the vision that the company has about its users, its business model, and what it’s important for its financial success. A set of metrics that Spotify looks at comprises:

Spotify tracks MAUs as “an indicator of the size of the audience engaged with its Service.” This is defined as the total count of Ad-Supported Users and Premium Subscribers that have consumed content for greater than zero milliseconds in the last thirty days from the period-end indicated.

Premium Subscribers are users that have completed registration with Spotify and have activated a payment method for Premium Service.

Premium Subscribers were 124 million as of 2019. The plan that most contributed to Spotify’s revenue growth was the Family Plan. While the Spotify free service kept enabling the upgrade from free to paid, which also helped the company grow its revenues.

That is the total count of Ad-Supported monthly active users that have consumed content for greater than zero milliseconds in the last thirty days.

This monthly metric shows the revenue recognized in the quarter indicated divided by the average daily Premium Subscribers in that quarter, divided by three months.

As Spotify increased the growth of its revenues bu enabling more people to join its Family Plan, the ARPU, or average revenue per user declined from 2017. Overall this had a positive effect on revenues, as Spotify tries to covert more free accounts to paid users.

That represents the premium members’ cancellations in the quarter indicated divided by the average number of daily Premium Subscribers in that quarter, divided by three months.

That represents the aggregate number of hours. Users spent consuming audio and video content on Spotify.

It’s easy to think of Spotify as a modern tech achievement, made of automated algorithms able to find out any taste a music fan has. Yet an exciting aspect of Spotify is its user-generated content, in which music listeners can easily and quickly curate and save their playlists to share with other Users. As of 2017, Spotify had over 3.2 billion User-generated playlists, which generated over 500 million streams daily and accounted for approximately 36% of Spotify monthly Content Hours!

Curated Playlists by Spotify editorial team which carefully curates them that allow Users to listen to music in specific genres account for approximately 15% of our monthly Content Hours.

Spotify marketing is based on four main strategies:

Spotify licensing deals affect its business model. The company runs on both a free service, which is ad-supported, and a subscription premium service. They have different economics.
The ad-supported business had a 15% gross margin in 2019, compared to 27% of the subscription-based business.
That’s because the more the content gets streamed on the platform, the more that increases royalty costs for Spotify. That is also why the company invested in developing its content. Thus, in part transitioning from platform to brand.
While this model works, it also poses some threats to the future development of Spotify’s business model, which leads us to the transition from platform to brand.

From platform to brand

Started primarily as a platform the company has also in part transitioned into a production house. This is part of the transition to becoming a strong consumer brand. But it has also to do with a business model evolution.

Where the licensing model makes Spotify future costs to monetize its users, too volatile. The company has also been trying to develop content, which makes its costs more scalable as the platform keeps growing. This is what I define as the transition from platform to brand.

During the pandemic, music and entertainment have become among the areas with the largest growth, where all else is falling. Indeed, Spotify kept growing in the first quarter of 2020, by adding six million premium subscribers and ten million ad-supported/free accounts, for a total of 286 million members.

Podcasting as a key driver for future growth

Another key driver for Spotify’s growth is podcasting. As the company keeps investing in this trajectory. Indeed, 19% of the Total MAUs engage with podcast content, and as reported by Spotify consumption grew at triple-digit rates year over year.

Reference for the article financials and corporate information: Spotify S-1 and Spotify 10K 2019