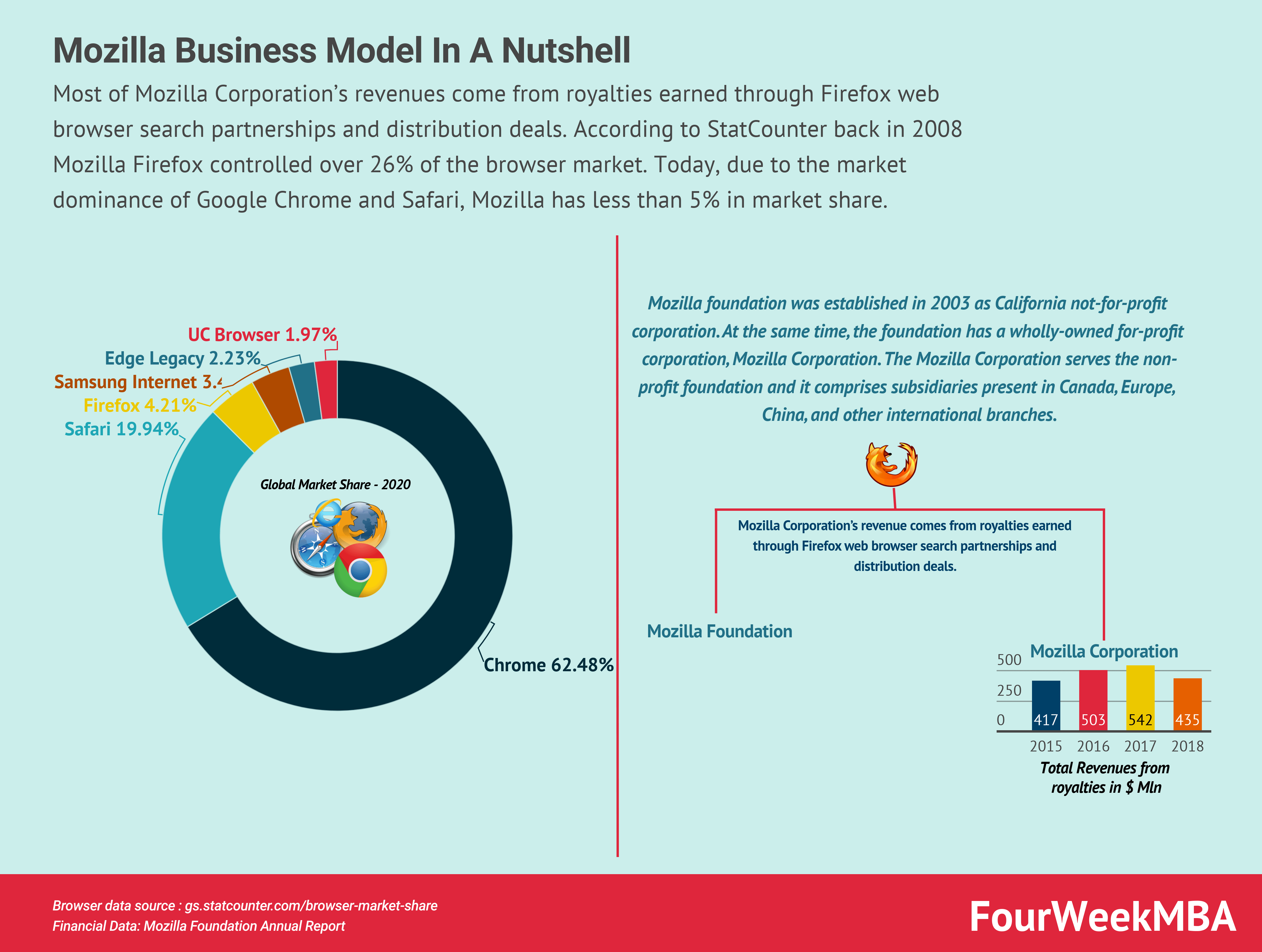 Most of Mozilla Corporation’s revenues come from royalties earned through Firefox web browser search partnerships and distribution deals. According to StatCounter back in 2008 Mozilla Firefox controlled over 26% of the browser market. Today, due to the market dominance of Google Chrome and Safari, Mozilla has less than 5% in market share.

The Mozilla Corporation serves the non-profit foundation, and it comprises subsidiaries present in Canada, Europe, China, and other international branches.

The majority of Mozilla Corporation’s revenue is from royalties earned through Firefox web browser search partnerships and distribution deals. Precisely 94% of Mozilla revenues came through royalties received by search engines to be featured on its Mozilla Firefox browser.

In 2017, Google closed a deal with Mozilla to be the primary search engine, by putting an end to a previous deal with Yahoo. As reported by Bloomberg, Firefox’s default search engine will be Google in the U.S., Canada, Hong Kong, and Taiwan.

Previous to the Yahoo deal Googe was already the default search engine for Firefox until Yahoo promised over $300 million a year of royalties to Mozilla, which made it go with it. That might have caught by surprise Yahoo, which as pointed out on Bloomberg, by Charles Stewart, a spokesman for Verizon’s digital advertising business, Oath.

We are surprised that Mozilla has decided to take another path and we are in discussions with them regarding the terms of our agreement.

I pointed out in “Why Google Success Was The Fruit Of Its Business Distribution Strategy” how Google perfect execution in business deals made it the successful company it is today. We don’t know yet how much Google offered to secure the deal with Mozilla again, but we can assume that it was a substantial offer.

As for Mozilla Foundation philanthropic programs and activities, those are funded by public support from individual donors and foundations ($13.8M), and from royalties earned that are paid by the Mozilla Corporation ($8.3M).

The anatomy of the Yahoo deal: did Yahoo make money from the deal with Mozilla?

Distribution is a critical component of the search market. Search engines like Google, Yahoo, and Bing’s success depend on their ability to be featured on several devices on the web. The key middleman between a search engine and its user is a browser. While back in 2008 Google managed to launch its own browser, Google Chrome, Yahoo instead had to secure its distribution primarily via third-party browsers.

As reported on Yahoo financials for 2016:

As pointed out in the same report:

What were the additional revenues Yahoo recorded thanks to its Mozilla deal?

This increase resulted from higher search volume on desktop due primarily to the Mozilla Agreement, which contributed $394 million

What cost Yahoo had to bear for that distribution and traffic acquisition?

Cost of revenue—TAC for the year ended December 31, 2015 increased $660 million, or 303 percent, compared to 2014, primarily due to increased payments to distribution partners (including Mozilla which contributed $375 million)

If we stick to this number, the traffic from Mozilla was priced for Yahoo at $375 million. Therefore, Yahoo recorded at least $19 million from the traffic coming by Mozilla Firefox.

A quick glance at the browser market: Once the leader Mozilla is now

According to StatCounter back in 2008, Mozilla Firefox represented over 26% of the browser market. Nowadays this percentage has declined substantially due in part to the market dominance of Google Chrome and Safari.

Open-source is a software licensing model, where the holder of the copyright gives the chance to anyone to study or perhaps reproduce the code. It’s important to understand the key difference between open-source driven business models, and freemiums.

In an open-source the software has been often developed as an effort by a community of developers, coming together and all contributing to it. Thus the software isn’t proprietary or kept secret, but rather released openly.

On a freemium instead (think of the case of Slack) the software is developed internally, it’s proprietary and released with a tight copyright. In that case, the company owning the software will monetize it in different ways (in some cases it can be ad-supported like Spotify), in other cases it simply is sold as a premium version (Slack).

Thus the freemium gives the company that developed it full control over its distribution. In an open-source model, instead, there is usually a non-profit organization (a foundation) who holds the property of the open-source licensed software. The foundation can run thrugh donations or perhaps royalties.

In some instances an adjacent corporation is created, that collects the royalties from the open-source (just like Mozilla Foundation and Corporation).

The traffic acquisition cost represents the expenses incurred by an internet company, like Google, to gain qualified traffic on its...