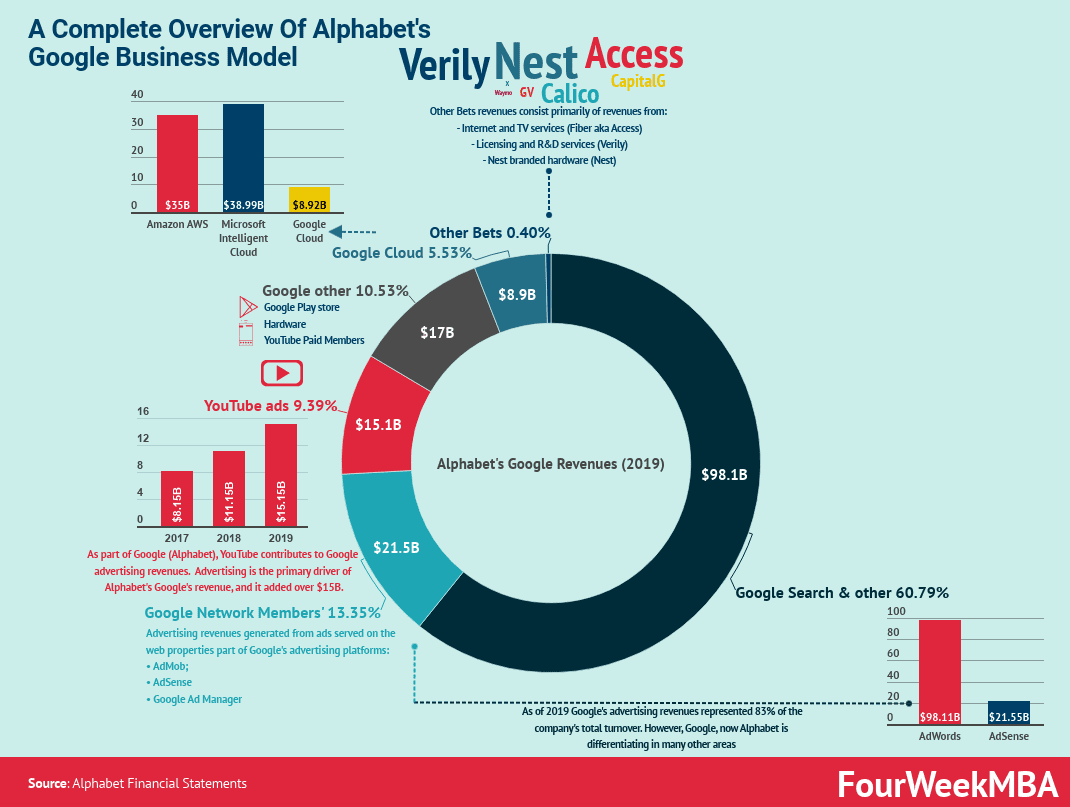 Google has a diversified business model, primarily making money via its advertising networks that, in 2019, generated over 83% of its revenues, which also comprise YouTube Ads. Other revenue streams include Google Cloud, Hardware, Google Playstore, and YouTube Premium content. In 2019 Google made over $161 billion in total revenues.

Google follows an advertising business model to deliver relevant ads. For relevant ads, Google means those are showing up just at the right time and giving people useful commercial information, regardless of the device they’re using. As of 2017 advertising represented still 86% of the total Google’s revenues.

Also, Google offers advertisers a set of tools that help them better attribute and measure their advertising campaigns across screens.

It does so by running two main kinds of ads:

Google creates and delivers relevant ads that users will click on, leading to direct engagement with advertisers. The performance advertisers pay when a user engages in their ads.

AdWords is the primary auction-based advertising program which helps create simple text-based ads that appear on Google properties and the properties of Google Network Members.

Also, Google Network Members use the AdSense program to display relevant ads on their web properties, generating revenues when site visitors view or click on the ads.

Google helps enhance users’ awareness and affinity with advertisers’ products and services, through videos, text, images, and other interactive ads that run across various devices.

Google focuses on creating what they define “the best advertising experiences” for its users and advertisers in many ways. Google clarifies its efforts as “ranging from filtering out invalid traffic, removing hundreds of millions of bad ads from the systems every year to closely monitoring the sites, apps, and videos where ads appear and blacklisting them when necessary to ensure that ads do not fund bad content.”

This is critical to Google’s success. One of the most compelling reason for Google to take off the search industry was based on its ability to rank organically content that was qualitatively 10x higher compared to its rivals. Also, even though Google AdWords allows advertisers to bid on keywords, it also selected those text-based ads based on the quality, as those text-based ads with more clicks got the highest spot on the search results pages.

How does Google measure its advertising network performance?

When assessing the advertising revenues performance, there are two critical metrics Google looks at:

Paid clicks represent the main business of Google that is bringing to the company over $95 billion (in 2017). One of the innovation Google brought, beyond its ability to serve more relevant results, it was an action-based bidding model (Google actually copied it from Overture) mixed with a relevance algorithm that ranked advertising based on what generated more clicks. Thus it was more relevant.

Paid clicks can be broken down into three main categories:

Paid clicks on Google properties represent engagement by users and include clicks on advertisements by end-users related to searches on Google.com

Paid clicks on other Google’s properties

Paid clicks also relate to advertisements on other owned and operated properties, some examples:

In some cases, such as programmatic and reservation based advertising buying, Google primarily charges advertisers by impression; this represents a small part of Google consolidated revenues base.

Cost-per-click is defined as click-driven revenues divided by the total number of paid clicks. Thus, that is the average amount Google charges advertisers for each engagement by users.

Several revenues might be influencing Google advertising revenue growth. As pointed out on Alphabet annual report for 2017 some of those factors are:

Google advertising network in a nutshell

An increase in paid clicks is a good sign of Google ability to attract advertisers on its platform. However, it needs to be assessed against Google cost per click change. More advertisers might spend less per clicks thus make the average revenues for Google decrease.

As you can see in 2017, the pay per clicks increased compared to 2016. However, it was offset by a decrease in cost per click. Google doesn’t show absolute numbers as this is kept secret.

Breaking down the other side of the Google business model

Google other revenues consist primarily of revenues from:

Google introduced in-app subscriptions to Google Play in May 2012. Previously known as Android Market, Google Play is a digital distribution service operated and developed by Google.

That is the Google official app store for the Android operating system. The set of applications developed on top of the Android software development kit and published via Google.

On Google Play, developers will make – based on apps purchases – a revenue split of 85/15. In short, the app developer makes 85%, while Google retains the 15%.  The products on the Google Play store have a strong mix comprising:

Google was a company built in the cloud and has been investing in infrastructure, security, data management, analytics, and AI from the very beginning.

We have continued to enhance these strengths with features like data migration, modern development environments, and machine learning tools to provide enterprise-ready cloud services, including Google Cloud Platform and G Suite, to our customers.

Our G Suite productivity tools — which include apps like Gmail, Docs, Drive, Calendar, Hangouts, and more — are designed with real-time collaboration and machine intelligence to help people work smarter.

Because more and more of today’s great digital experiences are being built in the cloud, our Google Cloud products help businesses of all sizes take advantage of the latest technological advances to operate more efficiently

Google offered hardware devices for purchase until the introduction of a separate online hardware retailer, called Google Store, on March 11, 2015.

That comprises Google-branded hardware and accessories:

Google “Other Bets”: A look into Google’s future

Alphabet’s Other Bets are early-stage businesses, which goal for them is to become “thriving, successful businesses in the medium to long-term.”

That is how Google defines them. One of the first steps Google has done is to have a “strong CEO to run each company while rigorously handling capital allocation and working to make sure each business is executing well.”

Verily, a life sciences company received an $800 million investment in 2017 from Temasek to accelerate its strategic programs.

Alphabet “Other Bets”: In Search Of Google’s Hidden Gems

Google business model can be broken down into three main lines:

The advertising network remains the cash cow of the company, making it 86% of its total revenues. That is a complex machine that made Google one of the most successful tech companies in the world.

However, Google has been building an ecosystem that allowed it to monetize in many other ways. Google Play is an app store where users can download anything from apps to music, books, and movies.

The model is based on revenues share with developers or publishers, usually based on an 85/15 split, where the developer keeps 85% of the revenues, while Google retains the 15%.

The third revenue model is comprised of Google’s other bets. A set of eight risky businesses of which only a few are already generating money.

Understanding how Google works at several levels, from how it makes money to how its search algorithms work is critical to understand how information will move in the next years. This, in turn, will help your business draw some of the visibility that comes through Google.

Like any company that is starting up, it is critical to draw the first stage of traction through an established network. Just like Google used AOL to gain traction, in its initial stage of growth, so it might make sense for your business, to gain initial traction through Google, via the so-called SEO strategy. For that matter, I’m listing below some of the other aspects of the Google business model via a few infographics.