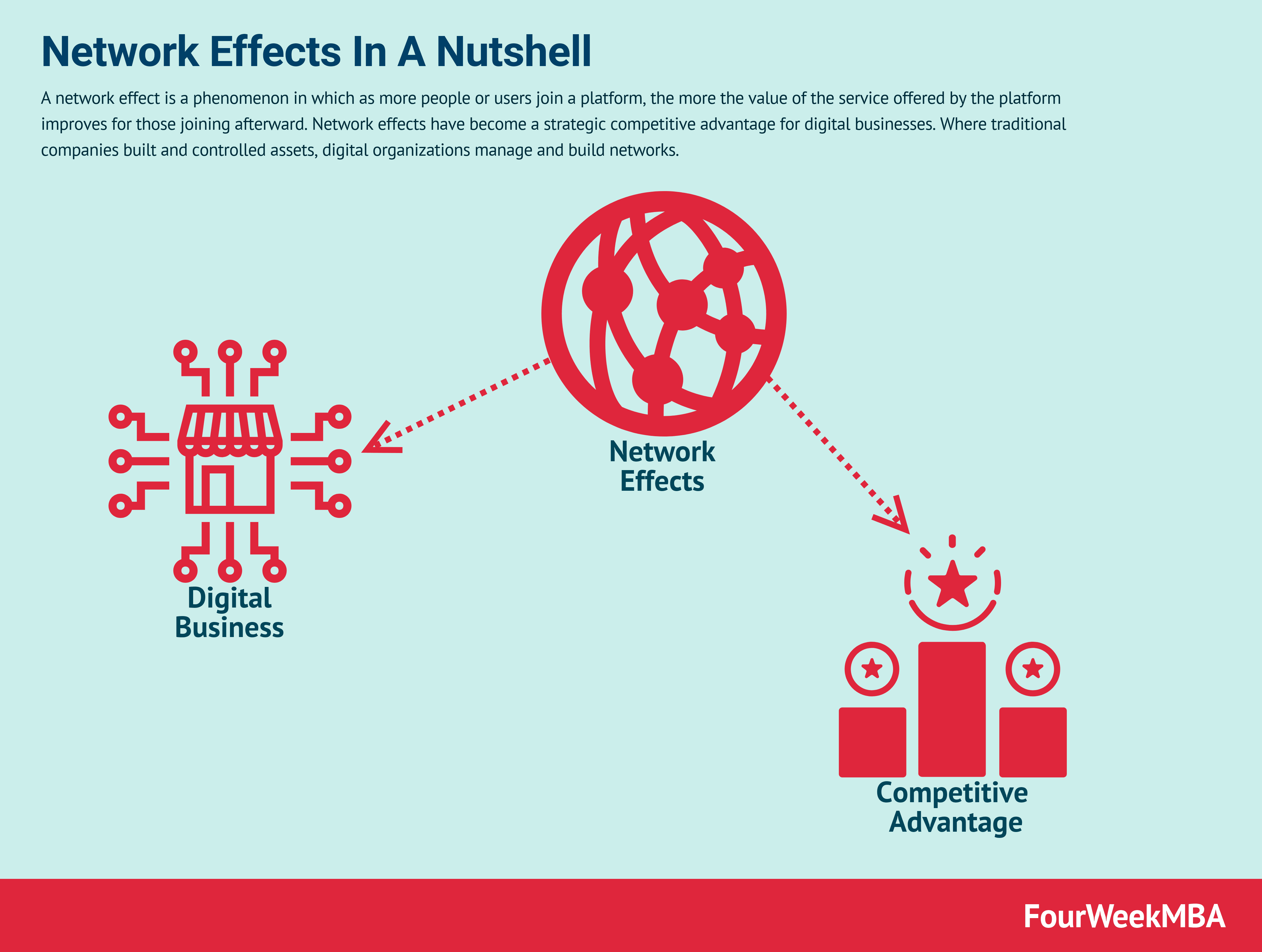 A network effect is a phenomenon in which as more people or users join a platform, the more the value of the service offered by the platform improves for those joining afterward.

Why do network effects matter so much?

Network effects have become an essential element of a successful digital businesses, for several reasons. First, the Internet itself has become a facilitator for network effects.

As it becomes less and less expensive to connect users on platforms, those able to attract them in mass become extremely valuable over time.

Also, network effects facilitate scale. As digital businesses and platforms scale, they gain a competitive advantage, as they control more of the total shares of a market.

Last but not least, as we will see, network effects are considered among the defendable, or what confers to digital business, a competitive advantage.

Read: Linear Vs. Platform Business Models In A Nutshell

If you think about something like Instagram, the software is great but could fairly easily be replicated. But the network of users and the content they create is impossible to replicate. That is where the value is created. Or think about Reddit where the community creates the content. Or think about Waze where the users generate the data about which way has the least traffic.

In the era of platform business models in most cases, technology can bring an initial advantage. However, over time technology might become a commodity as it can be easily copied and replicated as it becomes wider adopted.

What can’t be easily copied is the community comprised of the network of users part of the platform. That is because users interacting produce several positive network effects.

As more users join the platform the more it becomes valuable. Think of the case of a dating app with a few users in your town. How many chances there are the app would be able to match you up quickly? A few, thus the app won’t be much valuable to you

The interactions between users also generate data which the platforms can control, analyze and own, that can be leveraged on to create a lasting advantage. Therefore, the value of the network isn’t necessarily in the technology but in the data produced by the interactions

From transactions to interactions

As network effects become a primary advantage of the platform business, which can’t be easily replicated. The company needs to shift its mindset and manage the interactions in the platform. This is a key step to take. Think of the case of a company like Amazon, which over the years passed from being e-commerce to a platform business.

Indeed, most of. the transactions that happen today on Amazon are mostly from third-party sellers. While Amazon understood the value of network effects and of flywheel models early on.

To understand this concept read the full interview on digital platform businesses.

In my interview at Sangeet Paul Choudary, author of Platform Scale he highlighted:

negative network effect essentially means that the more the network grows, the value for the users goes down.

As he highlighted “negative network effects come up even in the online world. Not so much because of scale limitations, but because of limitations in quality management or curation.”

It is hard to keep up with that as the platform scales. Thus there is a problem of scalability, given by the fact that the platform might not be able to guarantee the same level of curation as it grows.

This might imply a dilution of the value of the platform.

The power of network effects

Network effects have become a key ingredient in the digital era enabling the dominance of a particular business model: the platform business models.

The era of platform business models

Platform business models make up most of the value captured and created by digital businesses.

Companies like Google, Facebook, LinkedIn, PayPal, and more are platform business models, which benefited and created a strong competitive advantage by leveraging on network effects.

That’s because, in theory, platform business models manage to scale efficiently. Thus, where a traditional business, at a particular scale, it reaches a point of inefficiency where diseconomies of scale pick up.

A digital, platform business, might scale so efficiently, to be able to grow close to the total size of the market. This enables the formation of monopolies.

Thus, network effects become the real “assets” in the digital era. However, those “assets” won’t be seen on the company’s balance sheets.

Quite the opposite, platform business models enable exchanges among a large number of people within a network, but in most cases, they don’t control any of the assets owned by the people in the network.

Instead, those platform businesses only facilitate exchanges. And as a facilitator, they collect a “tax” as a transaction fee. That’s why modern platform business models might look and act more like nations, rather than corporations.

As James Currier, from NFX, points out, “Network effects have emerged as the native defense in the digital world.” Within network effects as a defensible NFX points out three key elements: scale, brand, and embedding.

It is essential to highlight that the types of networks above are not exhaustive, neither set in the stone. But the framework offered by NFX is a great starting point to understand how network effects work.

In this guide, I want to focus on two main kinds of network effects:

Direct or same-side network effects happen when an increasing number of users or customers also increases the value of the product or service for the same kind of user.

In short, Metcalfe’s law, developed in communications theory, states that, as users of a network grow, this enables the exponential growth in the number of potential connections, thus also an exponential increase in utility of the platform.

Indirect network effects aren’t necessarily symmetric. In other words, in some cases, increasing one side of a platform might have more profound effects, than increasing the other side.

For instance, in Uber’s case, as a two-sided platform, driven by the exchanges between drivers and riders, the former play a more critical role.

Indeed, Uber uses dynamic pricing strategies that make the service less convenient for riders, but it keeps drivers going back to the platform.

In business, it’s easy to get confused between virality and network effects. But there is a clear distinction.

Where virality is a marketing tactic, that enables companies to lower up the acquisition costs of new users and customers.

Network effects represent a competitive advantage for digital organizations. Indeed, it is argued that network effects are the “real assets” digital businesses have.

Selling is hard. I wish I could tell you the opposite. That is why I'm not surprised that salespeople, like...