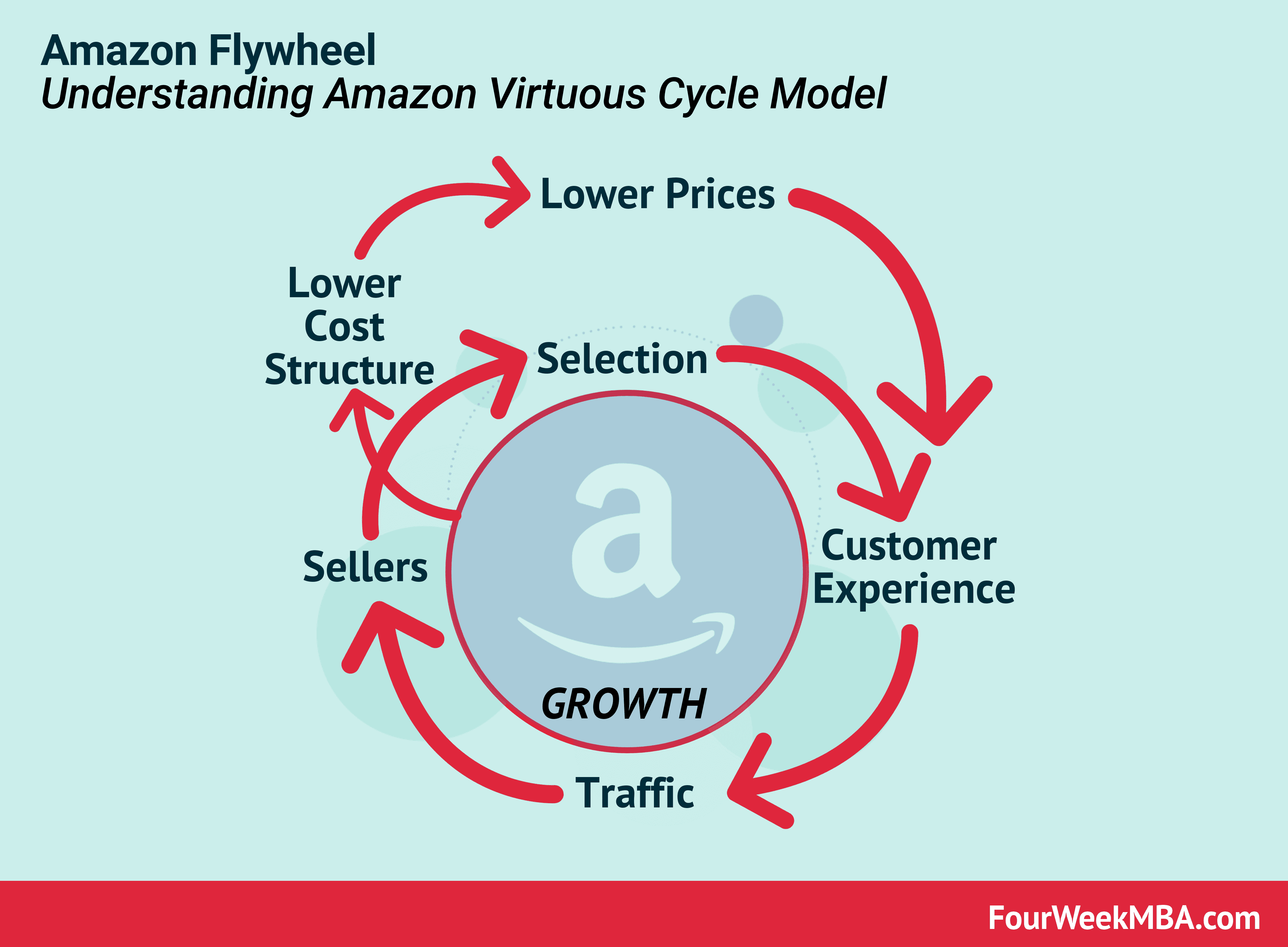 The Amazon Flywheel or Amazon Virtuous Cycle is a strategy that leverages on customer experience to drive traffic to the platform and third-party sellers. That improves the selections of goods, and Amazon further improves its cost structure so it can decrease prices which spins the flywheel.

This process is well known within Amazon and as explained by Jeff Wilke, CEO of Amazon Worldwide Consumer this idea was first sketched by Jeff Bezos back in 2001 and would become Amazon marketing strategy for years to come. That contributed to the Amazon business model success.

More than a tool this is a mindset, a way to seize opportunities within industries, where inefficiencies are the rule. At the same time, it helps speed up growth by investing as much as possible on customer experience.

In short, it starts with customer experience, Jeff Wilke continued:

Therefore, customer experience is fueled further via the presence of third-party sellers. While today it makes perfect sense, back then it didn’t much.
Indeed, those third-party sellers where Amazon competitors, and by giving them space Amazon was giving visibility to its competitors. However, as Jeff Wilke further explained:

In short, the flywheel converts in a growth strategy, where Amazon can speed up the process of having a more extensive selection, where it would have taken years for Amazon to build.
Thus, by co-opting third-party sellers, Amazon speeded up the process:

This virtuous cycle gave a particular imprint to Amazon’s growth, as explained more in detail by Jeff Wilke:

I covered already the Amazon Cash Machine Strategy, which has been another key ingredient to Amazon massive growth.

Therefore, from customer experience, you get a lot of traffic.

Rather than monetizing that traffic just by selling Amazon products, the company focused on allowing third-parties to sell their products on Amazon; this is the foundation of third-parties stores.

Instead of focusing on products Amazon already has, the company allows third-parties to bring a selection that – at least initially – is hard for Amazon to have. That selection makes the customer experience even richer.

Therefore, it allows the cycle to reinforce itself. At the same time, Amazon is known for its cash machine strategy where the company can operate efficiently at very tight profit margins.

Rather than distribute the cash as dividends to its shareholders, Amazon passes it in the form of lower prices to customers (Costco does something similar), while still generating enough money to sustain its short-term operations.

That cash generated is also used to fuel other initiatives, like Amazon Prime. On the other hand, the army of dozens of thousands of sellers that as of 2018, sold on Amazon, are all small organizations that employ up to six people, which when combined, make up another large organization.

Yet, when those small companies send their inventories to Amazon so it can get fulfilled (managed and delivered) by Amazon, the whole flywheel strengthens as those advantages are passed along the same third-party sellers on the platform. In something that looks like the image below:

To simplify even further this marketing strategy, we can start from two key elements:

A flywheel can be built in any business. While we’ve seen Amazon flywheel is built specifically on an e-commerce platform, you can try to find your flywheel.

If you never thought of your business, a business unit, or a project as a flywheel, now that is time to start implementing this mindset!

Amazon has built its success of a marketing strategy called flywheel or virtuous cycle. That consists of a reinforcement process that starts with the customer experience and ends with it.

When this cycle gains momentum, it also powers up economies of scale and made it possible to Amazon to speed up its growth process to the point in which in a few years the company dominated several industries.

A mindset makes you think in terms of flywheels in any part of your business. If you can incorporate that mindset within your organization, you might be able to unlock the great potential for your business!