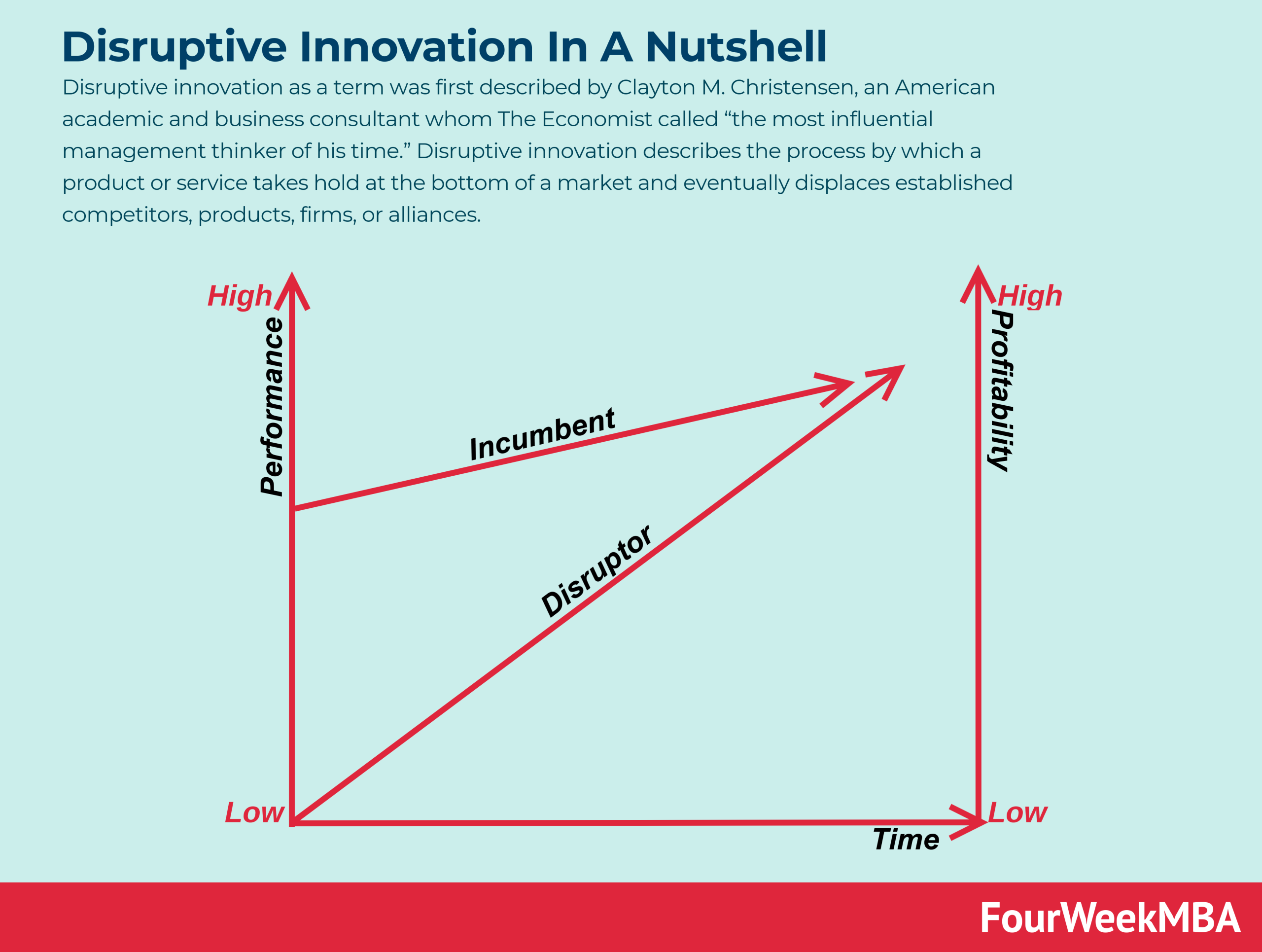 Disruptive innovation as a term was first described by Clayton M. Christensen, an American academic and business consultant whom The Economist called “the most influential management thinker of his time.” Disruptive innovation describes the process by which a product or service takes hold at the bottom of a market and eventually displaces established competitors, products, firms, or alliances.

Christensen first introduced the theory behind disruptive innovation in his 1997 book The Innovator’s Dilemma and a follow-up entitled The Innovator’s Solution. In the books, he posited that there were two types of technologies businesses dealt with. Sustainable technologies enabled a business to improve its performance over a predictable timeframe and remain competitive. Disruptive technologies, on the other hand, were less predictable and potentially more devastating to industry competitiveness.

Disruptive innovation typically occurs when a product or service establishes itself at the bottom of a market. This process is facilitated by the product being less expensive and thus more accessible than competitor products, which tend to be expensive, sophisticated, and accessible to relatively few consumers.

It’s important to note that disruptive innovations are not breakthrough technologies that turn good products into great products. Instead, they are simply innovations that make products or services more accessible and affordable to a larger percentage of the population.

Why does disruptive innovation occur?

Disruptive innovation occurs because most companies tend to innovate faster than their customers’ needs evolve. This causes a situation where the end product or service is too sophisticated, complex, or expensive for the majority of consumers in a target audience.

So why do companies pursue innovation? Historically, innovation has been associated with success as it helps the business corner the higher end of the market with the most profitable products. But this strategy leaves room at the bottom end of the market for a disruptive innovator to enter and potentially become a threat.

Disruptive innovators tend to operate in markets characterized by lower gross margins, smaller target markets, and simpler products and services. These traits make the bottom end of the market unprofitable and undesirable for firms that have already developed sustaining innovations.

What are the ingredients for disruptive innovation?

In the previous section, we talked about the conditions necessary for a new company to enter the bottom end of the market.

Let’s now explain how this new company can become disruptive by looking at the required ingredients:

There are countless examples of disruptive innovation in business. In this section, we’ll take a look at some of the more interesting case studies.

Encyclopedia Britannica was a market leader in encyclopedias and had been printed for 244 years until the last copy was released in 2012.

The publisher, Encyclopaedia Britannica, Inc., had the high end of the market cornered, with each edition selling for over $1000.

However, print encyclopedias were quickly usurped by free, digital versions such as Wikipedia. Wikipedia offered an encyclopedia of unlimited size that was portable and updated constantly. Encyclopedia Britannica, with its vast bulk and update cycles lasting more than a year, was ultimately displaced by a disruptive innovator.

Though video and game rentals were relatively cheap, increasing data speeds and bandwidth instituted a general shift toward video streaming.

Blockbuster was displaced by smaller players such as Netflix, who offered a cheaper and more convenient alternative. Today, the company owns the rights to more than 13,000 titles, with prices starting a mere $8.99/month.

Film companies such as Kodak enjoyed market dominance in the photography industry for decades. The company’s photographic film products were synonymous with quality and professionalism, but Kodak was eventually displaced by digital camera manufacturers such as Canon, Sony, Pentax, and Nikon.

Digital photography disrupted film photography because it was more convenient and required less expertise to develop photographs. Though digital cameras were relatively expensive when they first appeared, the number of digital photographs a consumer could take was not limited by the cost or restrictiveness of film.

To date, Concorde is the only supersonic jet that has entered into commercial production. High operating costs and limited seat capacity meant Concorde tickets were mostly purchased by the wealthy or super-wealthy.

Concorde services ended in 2003 due to high operating costs and a high-profile accident. However, the rising affordability of small, private jets was also a contributing factor. Though these jets did not travel at supersonic speed, their quieter operation meant they could fly routes off-limits to the extremely loud Concorde.

Many private jet owners also enjoyed the ability to fly between airports without having to move through the airport terminal with hundreds of commercial passengers.

Read: Ansoff Matrix In A Nutshell

The speed-reversibility Matrix, by FourWeekMBA will help you understand how to allocate the resources based on the worst-case-scenario-test.