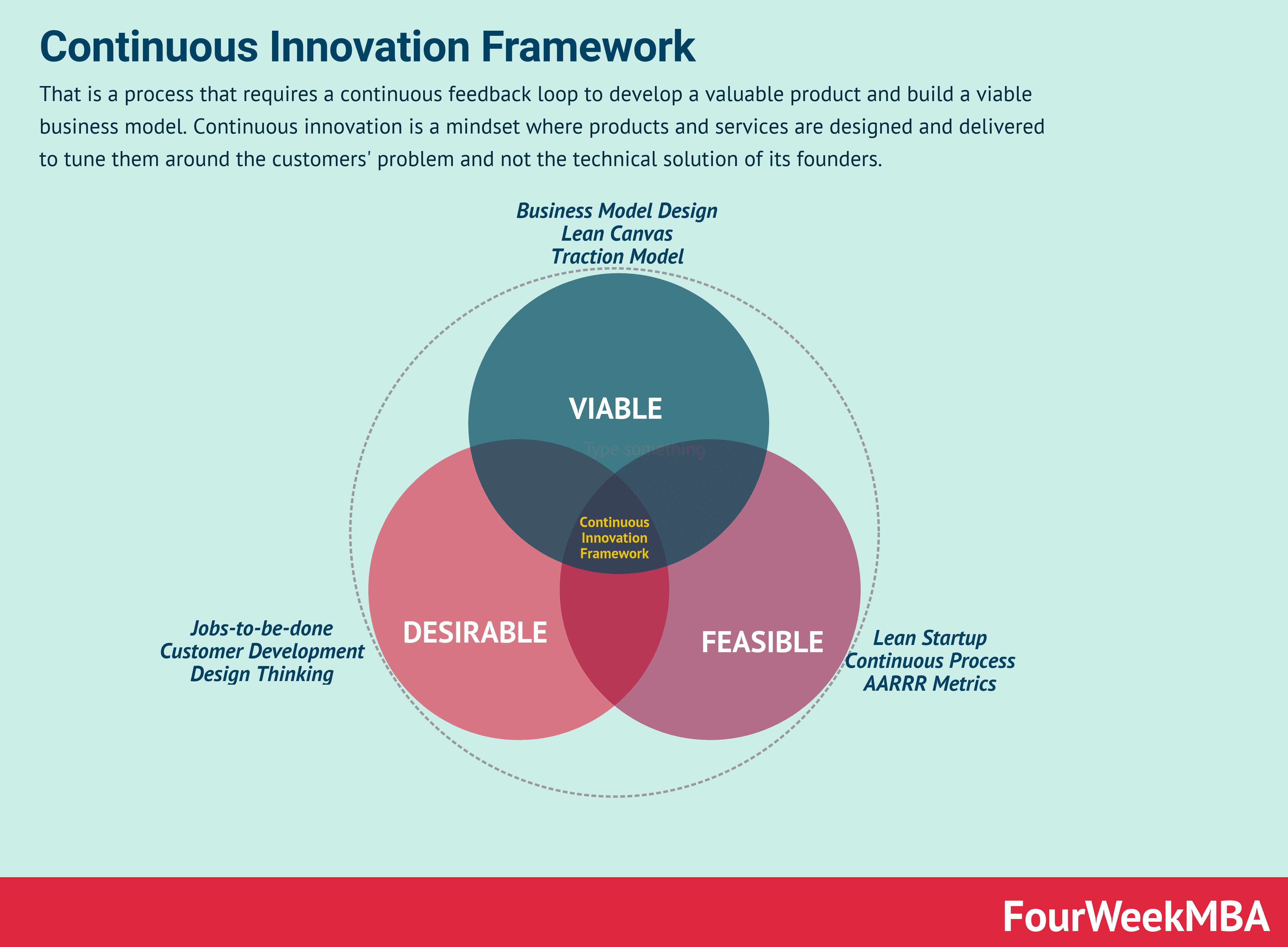 That is a process that requires a continuous feedback loop to develop a valuable product and build a viable business model. Continuous innovation is a mindset where products and services are designed and delivered to tune them around the customers’ problem and not the technical solution of its founders.

Continuous innovation as a set of mindsets

On FourWeekMBA I had Ash Maurya explain why continuous innovation matters so much. Let’ start from the key principles!

As Ash Maurya has highlighted continuous innovation is a set of mindsets moving along ten key principles:

Love the problem not the solution

One of the biases that that many entrepreneurs fall run into is this premature love of the solution. Like the first principles in science, you almost have to deconstruct an idea. We have to start with the basics. In this case, when we look at our business, we have to break it down into customers and problems.

If you don’t have the right customers who are trying to get sorted and problem solved, and no matter what solution you build, it doesn’t matter because we know that unless you’re solving a problem, customers are not going to use it.

This is a common mistake, happening especially in the startup world, where it becomes easy to focus on providing technical solutions rather than focusing on the problem those might solve.

That is why you need to make sure to understand the problem first.

What problem are you solving? For whom? What alternatives are the people for which you will solve the problem using? Why and what can you do way better than existing alternatives?

Those are the right questions. Yet, many still focus on how to build a feature, product, and service without validating or understanding what problem is solving in the first place.

As Ash Maurya further highlighted when I interviewed him on FourWeekMBA:

They’re not going to pay money. Even if you can reach them.Even if you have a patent or an unfair advantage, it doesn’t matter at the end of the day because your customers don’t care.So that is the way we logically break it down, but that innovator’s bias is one of those sneaky things.

Keep that in mind!

A business model is the product

In a world driven by technology, it’s easy to think of technological innovation and business model innovation as two analogous concepts.

However, while technological innovation often focuses on the technical solution in its own sake. Business model innovation is about creating scalable companies and repeatable businesses able to create value by solving problems for customers, consumers, users, all the while creating value, in terms of financial resources for other investors and stakeholders.

In short, business model innovation aligns several interests, both monetary and not monetary for several players at once.

That is why it is such a powerful concept. It requires a deep understanding of the conflicting interests at play while keeping them aligned.

In a digital era, where technologies become commoditized as they get to the mainstream, what’s left is business model innovation.

That is why Ash Maurya highlights that the business model is the product. That is what creates a competitive advantage.

Traction is the goal

It might sound strange, yet one thing that aligns both investors and customers (often) is traction.

That is particularly true for platform business models and those products which gain value as more users, customers, and people in general start using them.

Imagine the case of a platform like Airbnb, that has no traction. How can you make sure there will be the right room or home in the place you’re about to visit?

Unless it keeps gaining traction to have a wide variety of guest and hosts, how can customers be sure the platform will be valuable over time.

And as the platform gains traction and it sustains that, it becomes valuable for investors too!

As Ash Maurya highlighted in a 2016 post entitled “My 3 Biggest Lessons on Entrepreneurship (so far):”

“At any given point in time, there are only a few key actions that matter. Focus on those and ignore the rest”.

When you’re building a business, the way you decide to spend your time is the most important decision you make.

Thus, deciding on what to focus, but most of all on what not to focus that is key.

Give yourself permission to scale

This comes from the fact that a startup launching might worry too much on reaching the largest number of people possible.

That is a massive mistake. I can’t stress that enough and that is why I wrote about niche marketing and microniches.

Before you can scale, you need to find your first customers, and you need to define them very well and start reaching them early on!

Which connects to the next point.

As Ash Maurya highlighted in the FourWeekMBA interview on continuous innovation:

I sometimes like to call that permission to scale, so whether you’re a startup, whether you’re a corporate, we have to realize that products go through a life cycle, and rather than trying to rush to get to scale prematurely and then making a lot of mistakes and getting overwhelmed with risk, if we instead give ourselves permission to scale, start with smaller numbers of customers and users and more systematically roll it out, it makes the process more manageable. It helps us tackle the riskiest assumptions first.

There are several risky assumptions depending on the business you’re building. For instance, if you’re launching something that might not be technically complex, then the riskiest assumption is whether people might want that or not, so monetization becomes important.

If you can monetize it means there is a need for that product and use case. Thus, you can move to the feasibility risk. But even if you’re thinking to build a technically complex product, you might want to check whether there is a use case for it.

Unless you’re doing pure research, or you have a lot of funds allocated for the sake of technological innovation alone.

But once again, if we’re talking about business model innovation, you need to understand whether people are waiting for that problem to be solved.

For instance, when I interviewed Alberto Savoia he told the story of how IBM changed its course when it realized

Many many years ago IBM thought “we want everyone to have personal computers,” but there was no way (think about this is like 1980) that most people are going to learn how to use a keyboard. In those days who used a keyboard? Secretaries, programmers, and writers. So they thought, we need people to be able to operate the computer without using the keyboard, just by using speech to text into a microphone. Of course, they could not build the technology, they could not build the prototype for years because the technology was not there, computers were not fast enough…

…Now, this was not possible, the technology wasn’t there, so they could not have built a prototype. So what happened, in the room next door, instead of a computer that actually did all this processing, there was a human being, one of those people who know how to type very fast, got the input through the headphone, typed it on their keyboard, and so to the users it looked as if there was a working prototype, but there wasn’t…

…They learned very quickly and they got very valuable data that, while Text-To-Speech may be interesting, they better focus on accepting the fact that people will have to learn a keyboard. And, surprisingly enough, 40 years later we’ve all learned how to use keyboards even though, arguably, they are not a very efficient way of using a computer.

Ash Maurya 10x approach looks at what he calls a staged rollout or a place in which rather than opening to anyone you open to a set let’s say ten people first. A hundred. Then a thousand.

In this way you gradually scale, allowing enough feedback to avoid to kill your own product, too soon.

As we flow into the ocean of data, that is among the most difficult things to accomplish.

The way you can gather evidence is by avoiding potential biases first. Understanding that most of what you’ll look at will be biased. Thus, you need to be aware of those biases and expose them to avoid falling into the trap of making decisions based on perception.

This connects with the previous points. For instance, early on if you’re launching a product, it’s important to validate qualitatively by speaking to the first customers you get.

As the number of people accessing your product might grow, you can start looking at data which starts to having significance to understand how people consume your product or service.

Remove failure from your vocabulary

That is probably the hardest mindset to develop.

As none like to fail. However, if we have a model to build a business, we can develop a process to fail as well. So that each failed attempt and experiment will work as feedback.

If you just move the logic from personal (I failed) to procedural (the experiment designed through this process failed) you can definitely gain a better perspective!

What to read next

Eight Things You Need To Know About Business Model Innovation