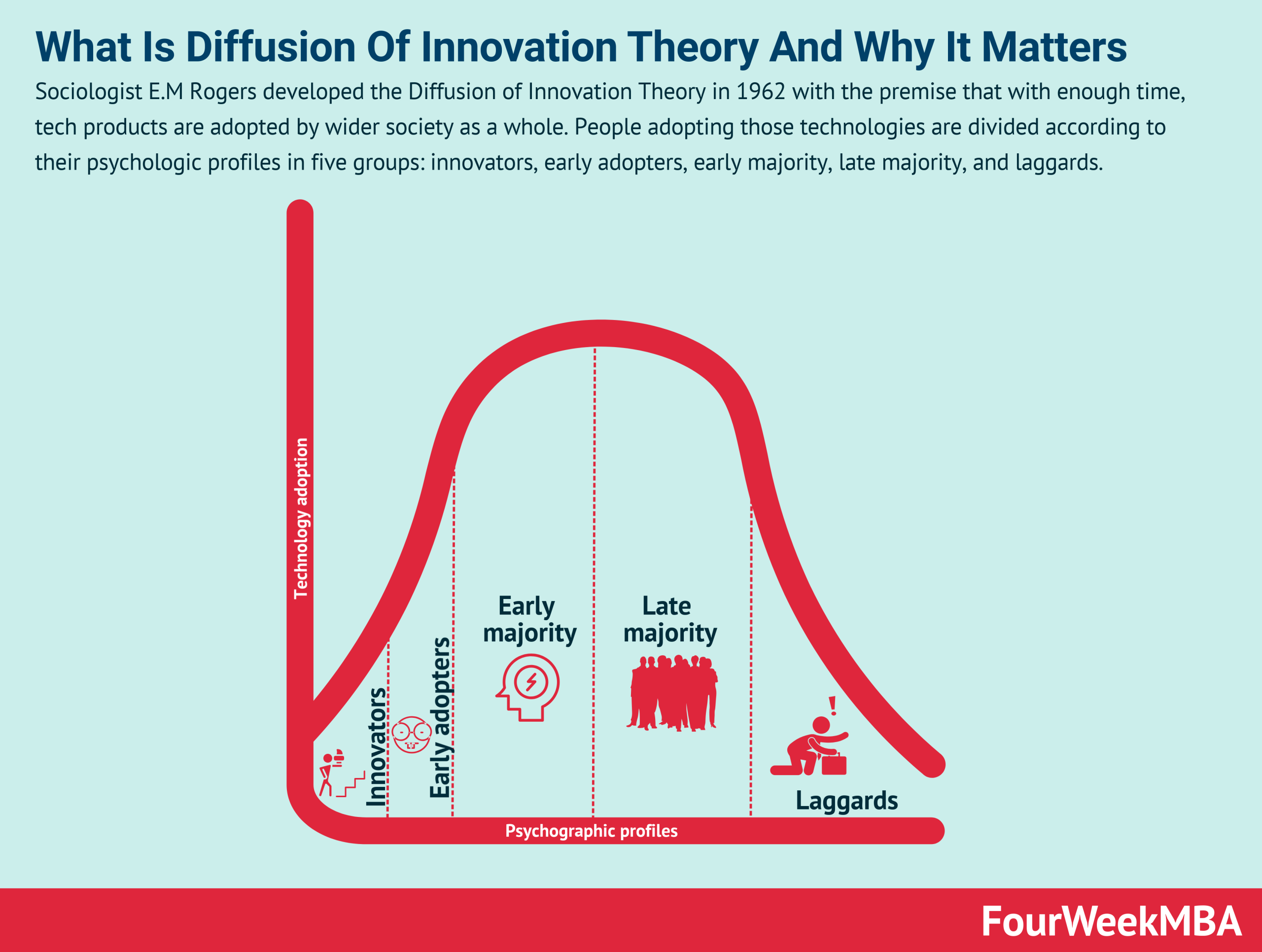 Sociologist E.M Rogers developed the Diffusion of Innovation Theory in 1962 with the premise that with enough time, tech products are adopted by wider society as a whole. People adopting those technologies are divided according to their psychologic profiles in five groups: innovators, early adopters, early majority, late majority, and laggards.

Understanding the Diffusion of Innovation Theory

The Diffusion of Innovation Theory was developed by sociologist E.M Rogers in 1962. The basic premise of Rogers’ theory is that people spread, or diffuse, ideas and products through a population. With enough time, they are adopted by wider society as a whole.

Indeed, adoption in this context means that a consumer does something that they hadn’t done previously. Businesses and marketing departments should be most interested in diffusion that results in consumers purchasing a new product and influencing wider society to do the same.

For that process to play out in reality, the right type of consumer must be targeted. In the next section, we will look at how this might be accomplished.

Categories of consumers in the Diffusion of Innovation Theory

Individual consumers within a social system can be classified into five distinct groups according to their propensity for innovation.

Innovators are consumers who are the first to buy a new product after it enters the market. In general, they come from higher socioeconomic classes and have the liquidity required for high-risk tolerance. They are also very social and have many close contacts with other innovators.

Early adopters are similar to innovators in their degree of liquidity, education level and social status. They are generally more opinionated about their life choices and enjoy a degree of leadership in this area. However, their risk tolerance is lower and as a result, they are more discerning about the type of products they adopt.

The early majority represents consumers who adopt a new product or technology after a sufficient amount of time has passed. They are not as vocal about their life choices as the early adopters, but their opinions still carry weight in wider society.

Late majority consumers approach a new product with scepticism because of their low liquidity and social status. They will generally not adopt a new product until the majority of a population of consumers has done so.

Laggards are the last consumers to adopt a new product. They tend to be found in older demographics who have traditional values opposed to change. They also have small social circles and have little to interesting in voicing their opinions.

Using the Diffusion of Innovation Theory in marketing

For marketing departments, efforts are best served by focusing on the early adopters and early majority. While the temptation may be to market to innovators, businesses should not confuse an innovator’s high tolerance for risk with the popularity of their products.

Efforts are best served by focusing on the early adopters and early majority. Consumers in these segments represent a sweet spot for marketers – with their high levels of disposable income, sociability, and product discernment.

For these reasons, these consumers create momentum that helps drive a product to its tipping point – or the point at which it becomes widely adopted in society.