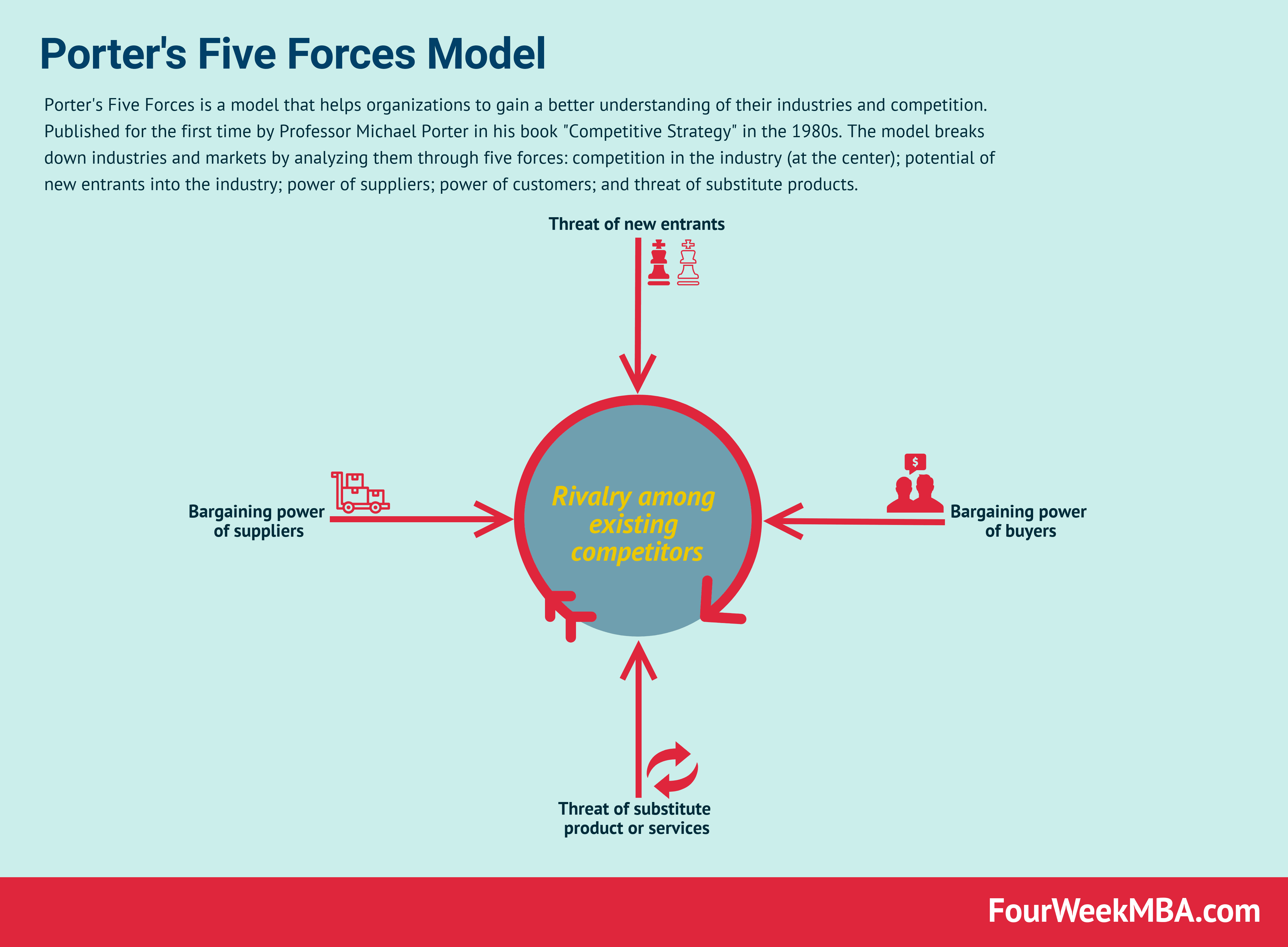 Porter’s Five Forces is a model that helps organizations to gain a better understanding of their industries and competition. Published for the first time by Professor Michael Porter in his book “Competitive Strategy” in the 1980s. The model breaks down industries and markets by analyzing them through five forces:

Porter’s five forces is a business framework that can provide a qualitative assessment and come up with a corporate strategy.

Porter’s five forces help, according to the author, to identify the attractiveness of an industry, and whether this might be retained in the long-run.-

According to Porter, the attractiveness of the industry, coupled with its competitive positioning (either through cost leadership or differentiation) can help a firm build a competitive advantage.

This force examines the intensity of the competition in the marketplace. The competition is given by several factors such as barriers to entry, the bargaining power of buyers and suppliers, and the threat of substitute products or services.

All those factors combined determine the competitive rivalry within an industry, and how attractive that is.

Some of the key elements that Porter takes into account in his book, “Competitive Strategy” are:

Imagine operating in a business where anyone can become your competitor. This is a market where there is no high capital requirement to start a business, and there are no particular regulations in place to limit the entrance from new competitors.

For example, in today’s world where anyone with internet access can create its blog or website with very few overhead costs, barriers to entry are very low, therefore the competition is fierce, and it is tough to keep the market share for too long.

What does determine barriers to entry? According to Porter, there are some key factors:

For example, Coca-Cola operates in a market where the suppliers are neither concentrated nor differentiated. Indeed, Coke ingredients such as caffeine and sweetener can be easily found in the marketplace.

Therefore suppliers, in general, cannot control prices. Other factors that according to Porter determine the power of suppliers are:

This is the flip side of the power of the supplier. Imagine a business where there are very few customers and switching between one supplier and the other is extremely easy.

Undeniably, this gives total control to customers to set the prices they want. Going back to our previous example, Coke is very powerful to its bottler suppliers.

According to Porter, there are two major factors affecting the bargaining power of customers:

Threats of substitute products or services

This force examines how easy it is for customers to switch from a product or service to the other. For example, Coke is extremely powerful in relation to its can manufacturer.

Indeed, competition among can suppliers is fierce. Also, the threat of substitution is very high. In effect, Coke can easily switch to plastic bottles.

Competitive advantage and competitive positioning according to Porter

Having analyzed the factors that influence an organization through Porter’s five forces,  a company can draw conclusions on its corporate strategy and integrate it with its business strategy, to maintain a competitive advantage.

However, it’s important to highlight that the world has changed substantially, since the 1980s. And there is one force that, in my opinion, broke down the walls of the Porter’s five forces: buyers’ information.

Where in the previous era, factors that spanned from economies of scale, integration, and distribution played a primary role.

In today’s business world, a core factor flipped it upside down: data and information. The Internet enabled many innovations. And yet, at business level, it helped companies get to know customers in ways that it was not possible before (or at least it was not possible to mass customize marketing activities).

In an era of information overload, easy access to the web and its applications has given to customers many options to pick from.

With much more information on the side of customers, lower switching costs (you can access offers from several competitors in a few clicks), and platform business models, competitive advantages have turned much more inward.

The customer-centered approach (what you see in design thinking, business model innovation, and lean methodologies) has taken over. And those companies that obsessed over customers also managed to build valuable businesses:

Porter’s forces might still be useful, as an exercise to analyze industries. Yet, the faster you move in gathering customers’ feedback, the more you will know whether you’re moving in the right direction.

Shorter product cycles, customer-centered frameworks, and lean methodologies have become the rule, in this era.

Beyond the five forces and into the Six Forces Model

Another important variation of Porter’s Five Forces Model is the Six Forces Model, where the sixth force is represented by complementary products. This force has been added throughout the 1990s, when different markets, especially in the tech industries had been reshaped by innovations, which were seen by consumers as complementary products first, then replaced completely existing products.

Indeed, Andrew Grove, former Intel’s CEO and the father of the OKR Goal-Setting System, in his book “Only The Paranoid Survive” highlighted how the sixth force – complementary products – was one of the key forces that determined a complete reshaping of the way of doing business.

And therefore, one of the forces that most (especially in the tech industry traveling at a faster speed compared to other sectors) had the ability to change business models, and leading to what Andrew Grove called a strategic inflection point. A point from which the way of doing business would never be the same.

This could become both a big threat for existing players, an opportunity for new entrants, but also a way for existing dominant players to redefine completely their business models. That is why, it makes sense, especially for companies operating in the tech business world, to map and analyze the context by adding this sixth force.

Other frameworks from Michael Porter

Other frameworks that you can use in conjunction with Porter’s five forces are:

Read: Ansoff Matrix In A Nutshell

The speed-reversibility Matrix, by FourWeekMBA will help you understand how to allocate the resources based on the worst-case-scenario-test.