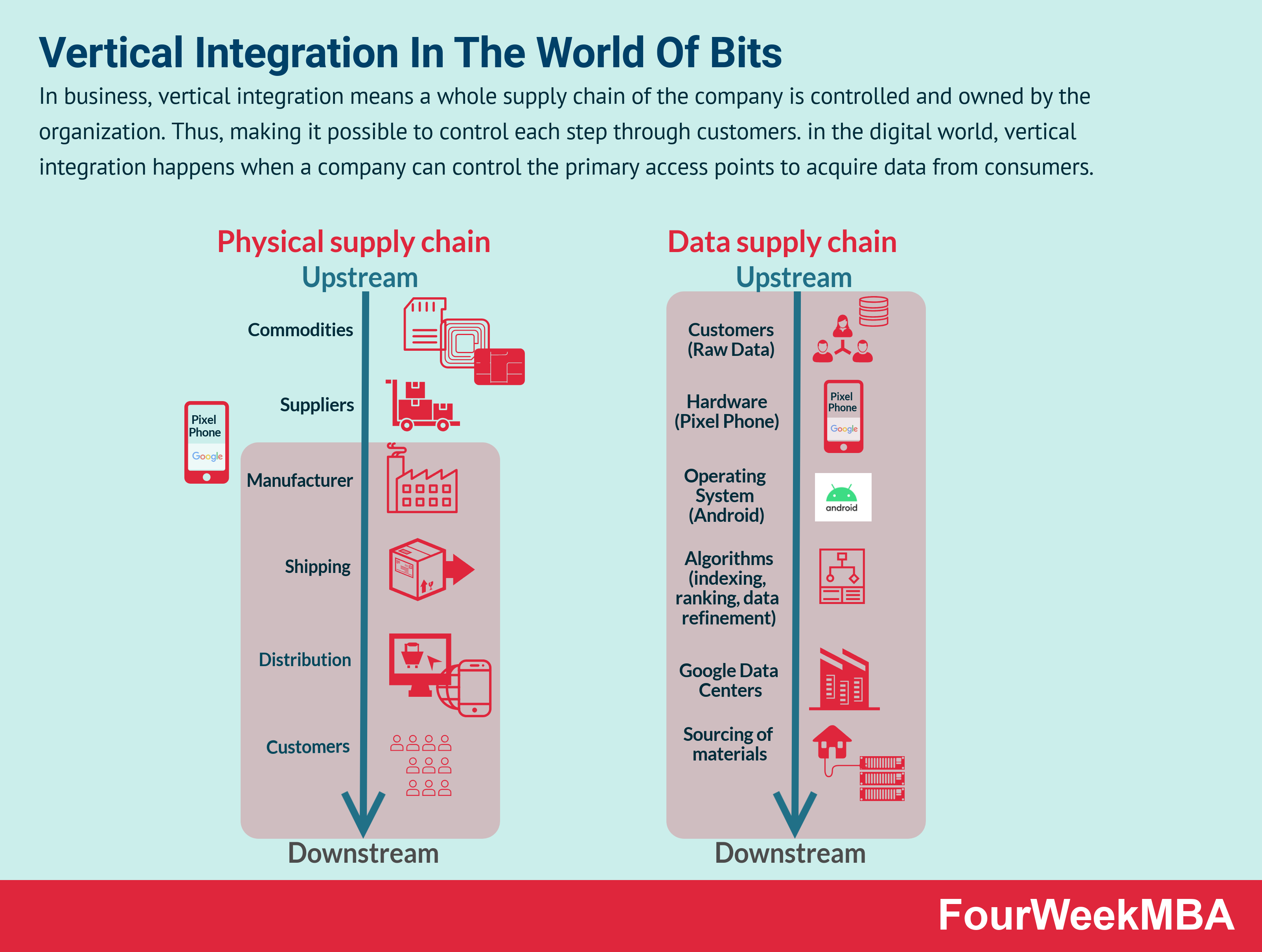 In business, vertical integration means a whole supply chain of the company is controlled and owned by the organization. Thus, making it possible to control each step through customers. in the digital world, vertical integration happens when a company can control the primary access points to acquire data from consumers.

Vertical integration in the physical world

On FourWeekMBA, I discussed Luxottica business model, which is a great example of vertical integration:

Luxottica controls the whole supply chain, that goes from product development, to manufacturing, and logistic.

This helps it gain control over the quality of the final product, and connect its product development processes with the distribution and customer experience.

While this strategy is more expensive in the short-run, over the years can turn into a competitive advantage.

As the Luxottica case shows, the company grew and it integrated more brands within its portfolio (iconic brands like Ray-Ban and Oakley are part of the Luxottica Group), by both having Luxottica owned brands and by producing sunglasses for other major luxury brands.

By controlling the supply chain, and taking a step further to its retail strategy, Luxottica can connect the dots between product development and final customers to make sure quality and customer demand are aligned.

This process is used also in the digital world, by players like Google or other tech giants, that over the years have developed products and distributed directly to customers to gain control over the whole supply chain.

In early 2018, Sundar Pichai, Google‘s CEO, highlighted how AI for humanity is more important and profound than what fire was. To keep using an analogy, the real fuel that keeps the AI fire going is data. Indeed when we go from atoms to bits, the strategic thinking behind an organization changes.

For instance, in for a traditional company, one of the long-term success of the organization is based on keeping control of its processes and being able to control the whole supply chain.

While this strategy is expensive, it is also what drives sustainable growth. For instance, traditional companies operating in “slower” sectors (think of Luxottica in the eyewear industry) managed to gain control over the supply chain also became world’s leaders in their markets.

This, in turn, might allow you to dominate your industry over time and keep tight control over processes, quality, and operations:

While this is intuitive in the world of atoms. It gets a bit trickier in the bits world.

For the sake of understanding how vertical integration and supply chain work in the bits world we’ll look at how Google is going up – or down (depending on where you look) the supply chain of data.

As the web has become so ingrained in the way we interact with the world and with each other, it is easy to forget between companies that operate purely in the atom world, compared to that operating in the bits world.

Just to keep a clear distinction a business based on bits is mostly a software business or any organization that makes money primarily by selling digital goods or services, compared to a traditional atoms business.

It is important to remark that bits businesses are not entirely so, as they rely on massive physical infrastructure (think of Google data centers) which allow the company to operate.

However, a bits company’s mission is to provide goods or services, often at scale. Where in the world of atoms, a key ingredient for an organization’s success is made of raw materials. In the bits world, that raw material is even more critical.

That is the crucial ingredient for their success, and the raw material in the bits world is data.

Google and the supply chain of data

Before understanding vertical integration in the bits world, made primarily of data it is critical to understand how it flows to realize how tech companies are trying to gain control of it.

Indeed, when you’re able to get your hardware in the hands of users that is the best it can happen if you run a company that makes money based on data it collects from its users.
The reason being that data is first quality data, and it carries a deep connection to the person using the device. That’s why when Google moves toward hardware it isn’t just like Google is trying to dominate the smartphone market. That move needs to be understood in terms of a supply chain of data.
A manufacturer in the real world starts to integrate its supply chain by getting control over the wholesale side and retail side until it can finally access its consumers.
On the other hand, the interesting part about data is that a consumer is also the producer of data.
Where the data collector goes up in the chain by manufacturing the device sold to consumers, those devices also become the producer of raw data. That raw data gets assembled in multiple ways and sold to another side of the chain, which is the business willing to spend money on advertising.

At its core, Google is a data collecting organization. Indeed, in search, Google is the best collector of users’ data to capture commercial intent sold as advertising.
In recent research made by Professor Douglas C. Schmidt, Professor of Computer Science at Vanderbilt University, and his team it is interesting to see how Google collects way more data in the ecosystem created by it, such as the devices using Android. Just as a quick reference from the research, one of the key findings highlighted:

Google learns a great deal about a user’s personal interests during even a single day of typical internet usage. In an example “day in the life” scenario, where a real user with a new Google account and an Android phone (with new SIM card) goes through her daily routine, Google collected data at numerous activity touchpoints, such as user location, routes taken, items purchased, and music listened to. Surprisingly, Google collected or inferred over two-thirds of the information through passive means. At the end of the day, Google identified user interests with remarkable accuracy.

This ability to identify users’ interests with “remarkable accuracy” comes from Google investments over the years in creating the proper infrastructure that could support its supply chain of data.

As voice search is approaching Google needs to be on top of the data game, and that explains the next run to dominate the voice assistants devices market.

From the search page to the voice assistant

When you type something on Google’s search box, you’re making its search engine better and better. That is the power of network effects. In short, the more users keep using Google, the better its search engine can capture users’ commercial intent.

However, even though Google has a high gross margin, people still have to keep going back to its search pages. As I pointed out in Google TAC strategy, the company managed to keep having billion of users each day going back to it thanks to a massive distribution network, both driven by distribution agreements and its networks (like AdWords and AdSense).

Yet that data is precious it is still coming from third parties. Therefore, Google is investing massive resources to make sure that data can get acquired via its devices so that it can finally have control of the overall chain.

As I pointed out in Google’s hardware plans in January 2018, Google completed the agreement with HTC with the acquisition of the team of engineers and a non-exclusive license of intellectual property from HTC for $1.1 billion in cash.

Another example is how Google invested in KaiOS, an operating system, that transforms feature (dumb) phones in smartphones, providing them also of a default voice assistant (KaiOS phones use by default the Google Assistant).

That works as a window into the Indian market, where Google can access voice data, directly from those devices, thus bringing it closer to over a billion consumer base, that in the future might turn into a great business opportunity.

That move is toward creating a vertically integrated supply chain of data!

Therefore, imagine a wholesaler’s leader buying another leading company, to take a bigger chunk of the same market.

An example of horizontal integration might be the acquisition from Uber of Postmates. By integrating Uber Eats to Postmates, this will create a bigger player in the same market and segment of the supply chain (last-mile meal delivery).

An example, instead of vertical integration, but in the bits world, as highlighted in Google’s data supply chain, that the company is able to integrate its supply chain from upstream (in this case the upstream side starts from customers who become the sources of the raw data), to downstream.

Related resources for your business:

A business strategy is a deliberate plan that helps a business to achieve a long-term vision and mission by drafting...