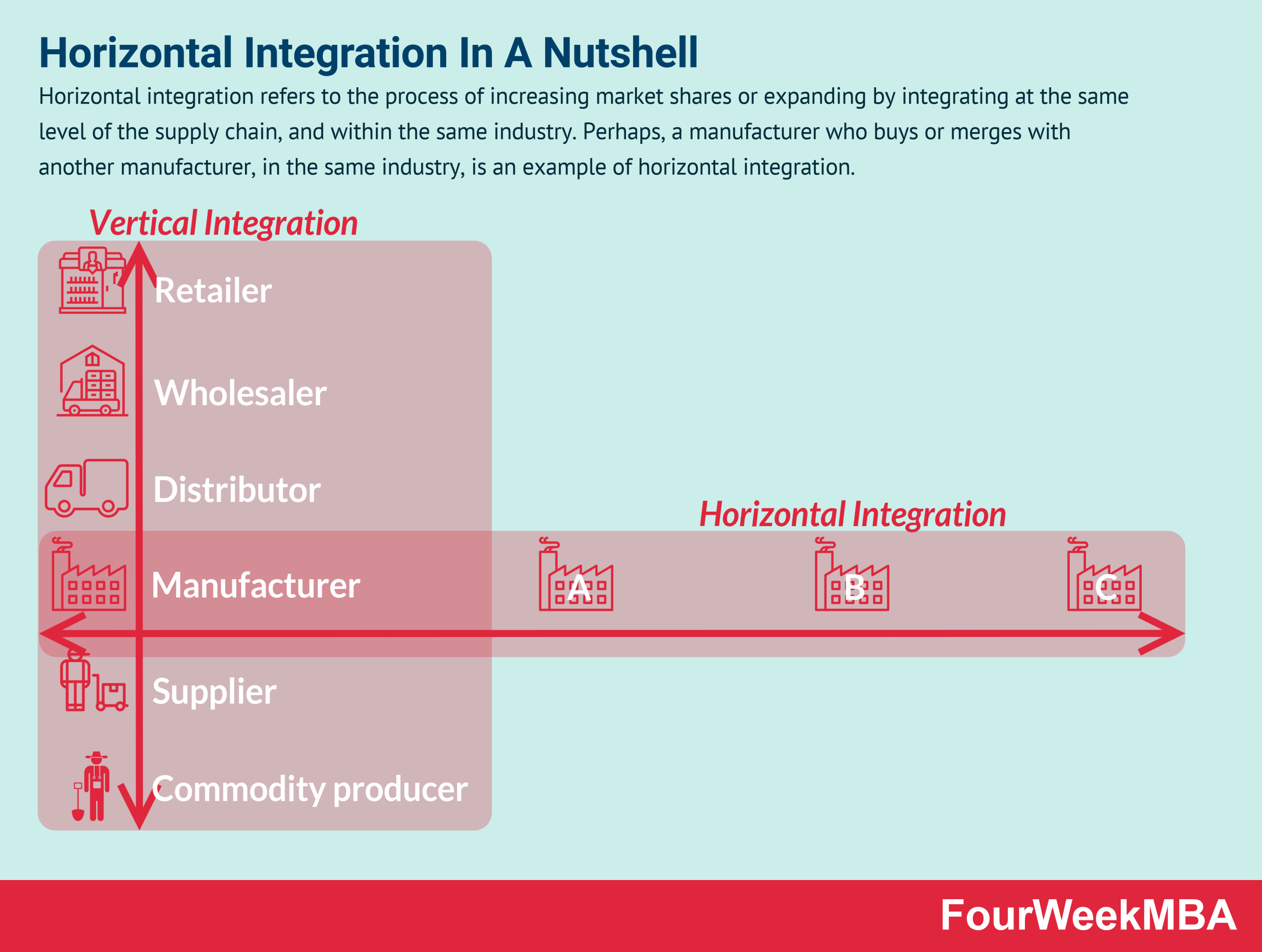 Horizontal integration, just like vertical integration can happen in several ways. Companies willing to expand will do that by either using their internal resources to take more space within the same part of the supply chain and within the same industry (internal expansion).

Or they might merge, by forming a single entity. Or through acquisition.

When and why horizontal expansion makes sense?

What are the potential drawbacks of horizontal integration?

Let’s see a set of horizontal integrations happened in the digital era, which might help us understand how the process has been used by current market players to expand, defend or redefine their business models.

In July 2020, Uber announced a multi-billion dollar deal, which would enable it to be among the largest players, as a result of the consolidation happening in the meal delivery industry, which leads us to the next example.

In June 2020, GrubHub and JustEat merged in a deal worth over seven billion dollars, to create one of the largest meal delivery players in the world. The deal happened after Uber had been looking into the possibility of acquiring GrubHub.

That raised concerns as it would have created a monopoly in the US. At the same time GrubHub and Uber might have not found a deal given their cultural differences.

As the deal slipped, the merger between GrubHub and JustEat got finalized.

TikTok acquisition of Musical.ly and its rebranding

Back in 2017, TikTok acquired Music.ly and by 2018 it rebranded it within its own app, to create a single platform, which scaled extremely quickly.

TikTok, therefore, used the acquisition of Music.ly to expand, quickly.

Back in 2012, Facebook acquired Instagram, for a billion dollar. What seemed expensive at the time, for a mobile app that wasn’t profitable, it became among the most valuable products for the Facebook portfolio.

At the time, Facebook opted for a multi-product strategy (for the first time), where Instagram was left as an independent product of the Facebook family, free to develop on its own, and by slowly integrating it into the Facebook ecosystem.

Yet, over the years, Facebook tightened its clasp over Instagram, and it became part of its advertising platform. Today Instagram is the product that makes most of the revenues for Facebook, as it successfully converted to mobile.

What Is A Moat? Moats, And Share Of Mind In The Digital Era

Economic or market moats represent the long-term business defensibility. Or how long a business can retain its competitive advantage in...