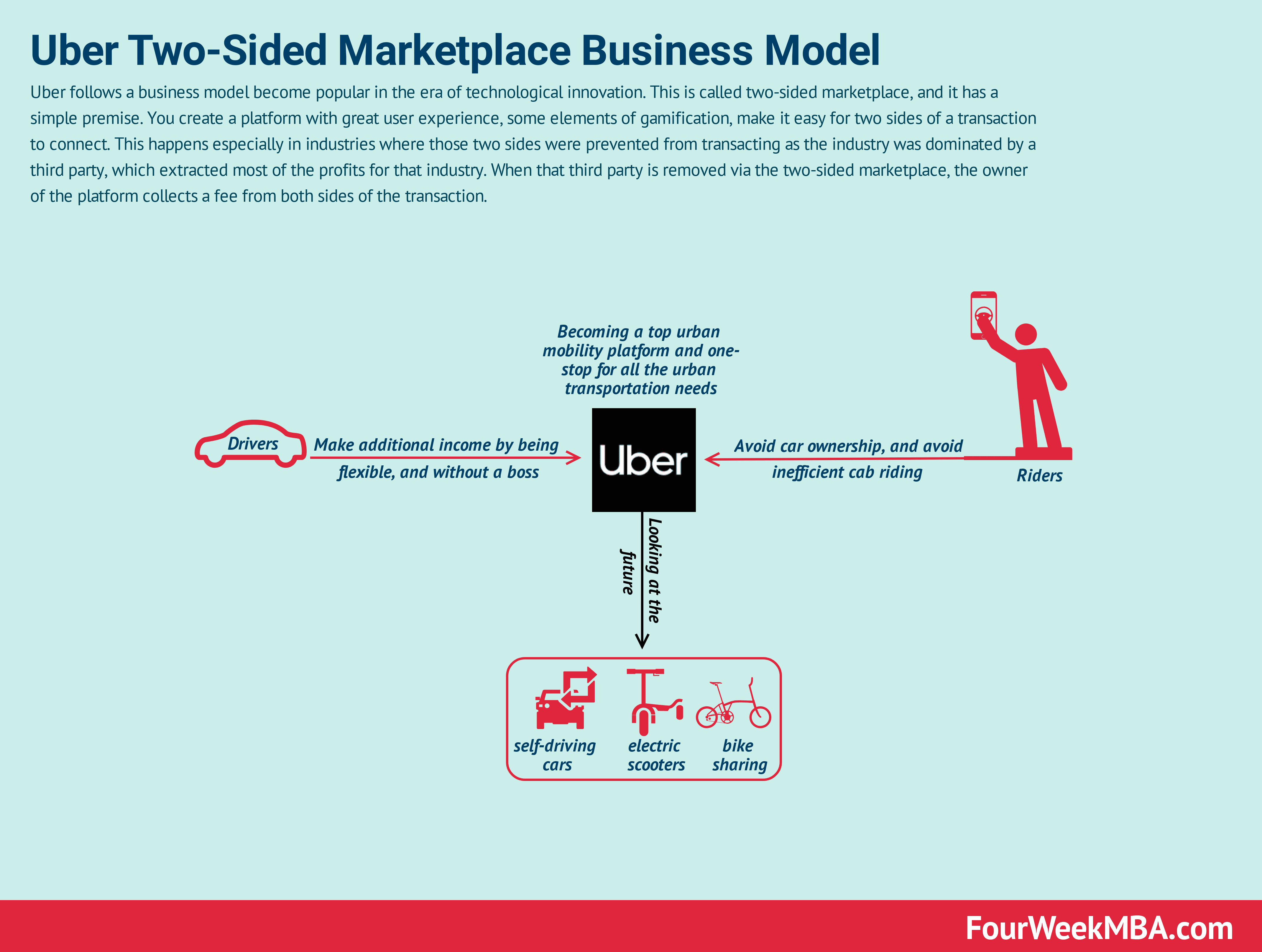 Uber is a is two-sided marketplace, a platform business model that connects drivers and riders, with an interface that has elements of gamification, that makes it easy for two sides to connect and transact. Uber makes money by collecting fees from the platform’s gross bookings.

The origins of the Uber business model

As pointed out Dara Khosrowshahi, CEO of Uber, in its financial prospectus. Uber started in a specific moment in the business world. When the “rise of smartphones, the advent of app stores, and the desire of on-demand work supercharged Uber’s growth and created an entirely new standard of consumer convenience.”

Related: The Framework To Build A Successful Two Sided Marketplace

What’s so special about Uber?

Bill Gurley, Bill Gurley, general partner at Benchmark and an early investor in Uber pointed out what he thought was its best feature:

no driver-partner is ever told where or when to work

This is quite remarkable — an entire global network miraculously “level loads” on its own. Driver-partners unilaterally decide when they want to work and where they want to work. The flip side is also true — they have unlimited freedom to choose when they do NOT want to work. Despite the complete lack of a “driver-partner schedule” this system delivers pick-up times that are less than 5 minutes (in most US cities (with populations over 25K) and in 412 cities in 55 other countries.

In short, Uber has been able so far to build with an invisible hand a global network able to “manage” bottom-up and with no such thing as a “schedule”!

Becoming a top urban mobility platform is part of Uber’s ultimate vision as pointed out by Uber:

We see the Uber app as moving from just being about car sharing and car hailing to really helping the consumer get from A to B int he most affordable, most dependable, most convenient way,

Our ultimate goal is one we share with cities around the world: making it easier to live without owning a personal car. Achieving that goal ultimately means improving urban life by reducing congestion, pollution and the need for parking spaces.

Its core principles are:

These elements give us a first glance at Uber’s long-term direction.

Uber value proposition was born on the need to make up for the scarcity of cab drivers and the inefficiencies of urban mobility.

Let’s start from Uber’s first side of the marketplace, its drivers.

In a series of posts from Uber blog entitled “Why I drive,” several drivers explain why they do it. For instance, Susan explains:

I love the freedom I have to work when I can,  and make as much or as little as I need.  Meeting different people everyday makes this more enjoyable.   It’s the best business opportunity I have ever had.  Thank you, Uber!

Thus, even though several drivers find a different reason to drive with Uber, there is a common thread which is a part-time “job” that provides supplemental income and flexibility to work any time, without a boss.

The ability to generate enough revenues for drivers to get back is a crucial ingredient to Uber success.

This is also why Uber tries hard to get drivers on a constant basis. This need for drivers also fueled other business models, like HyreCar.

Related: How Does HyreCar Make Money? HyreCar Business Model In A Nutshell

On the other hand, when it comes to riders, Uber offers a few key elements that make up a unique value proposition that apply to most of them.

First, as urban dwellers have kept growing, the cost of ownership of a car has become higher and too expensive to bear.

In this respect, in urban areas, giving up to car ownership has become a no-brainer. This makes ride-sharing convenient.

Second, Uber and other apps like Lyft makes it extremely easy to go anywhere with the least friction thanks to their gamified marketplaces.

Another critical element for riders is safety. For instance, Uber performs now background checks on its drivers that comprise “felonies, violent crimes, sexual offenses, and registered sex offender status, among other types of criminal records” which automatically disqualify drivers from the platform.

A two-sided marketplace has to have built-in mechanisms that allow network effects to pick up. This means that for each additional driver or rider joining the platform, it becomes better and better for the others joining next.

As Uber tapped and taps into inefficiencies created by the misallocation of supply and demand within the taxicab industry. The more efficiencies Uber gains, the more appealing it becomes and the more revenues it grows.

Thus, Uber leverages on the Liquidity Network Effects that aims at growing and broadening the network, so that the company can capture higher margins in the long run.

Another key element is about market expansion. Any successful two-sided marketplace will be able at a particular stage to expand market opportunities.

For Uber, in particular, the company taps into a few specific needs:

When those needs are combined with a technological marketplace, it also generates several markets, that before didn’t exist.

For instance, since Uber inception, a new need for cars for rent to make additional income over the platform has sparked new businesses like HyreCar.

Uber makes money via a service fee that drivers pay. This service fee varies from trip to trip, and it represents the difference between what riders pay and what drivers earn once removed tips, tolls, fees.

Uber is also betting on other segments, such as:

Uber fees range from 20% – 25% of the total amount charged from the riders.

The fares are calculated based on a few elements:

Among the pricing models used by Uber there are:

Those strategies have several aims. With surge pricing, for instance, Uber can calibrate the demand and offering of rides to allow riders to pay more if they don’t want to way for a driver.

And at the same time to allow drivers to earn more if willing to move to “hot areas” when there is a surge in pricing.

With upfront pricing instead, the company shows in advance the cost of a ride. As pointed out by Uber, riders feel confident taking trips when they have the information to make better decisions and drivers get more opportunities to earn.

Uber has used a particular kind of dynamic pricing called surge pricing. This strategy has allowed Uber to allow the matching of demand and supply of rides, and steadily repopulating its drivers’ population which has high churn rates.

It also works as a stimulus for drivers willing to make more money to move in certain areas.

For instance, in a classic case of surge pricing Uber signals to drivers what area is experiencing them. So that drivers can go in that area and earn more.

When prices are surging, you’ll see a multiplier to the standard rates on the map. For example, you might see surge at 1.8x or 2.5x. This is how much your base fare will be multiplied by, so a fare that is usually $10 would be $18 when it’s at 1.8x Surge. Uber’s fee percentage does not change during surge pricing.

At a visual level, users can recognize surge areas based on the change of color of certain neighborhoods on the map. Where areas that will go from orange to dark red going from standard pricing to multipliers:

How does Uber make money? The agent revenue model

Uber’s’ P&L from its Financial Prospectus

If we look at the increase in net income from 2017 to 2018, those were primarily influenced by a one-time operation. Gains increased by $3.2 billion from 2017 to 2018 primarily due to gains on the divestitures of our Russia/CIS and Southeast Asia operations.

Indeed in February 2018, Uber divested its operations in the Russia/CIS region, it created a new entity called MLU B.V., which in exchange for a non-controlling interest of 35%.

In the transactions that happen through Uber, the company acts as an agent. Indeed, it connects the end-user with the proper provision of the ride-sharing or delivery service. As such Uber makes money from three key areas:

How will Uber make money in the future?

For the future Uber is betting on a few potential revenue streams:

In July 2018, Lime, a company which mission is to “help people move around their cities affordably and conveniently while eliminating their carbon footprint” announced a Series C financing round of $335 million led by Alphabet’s Google Ventures which also involved Uber.

Interviewed on the deal Rachel Holt, Uber’s head of new modalities specified “Our investment and partnership in Lime is another step towards our vision of becoming a one-stop-shop for all your transportation needs.“

As part of a plan to cover all the possible transportation needs of people in the future, Uber acquired the dockless bike startup Jump in April 2018, which aligns with the vision of becoming the top urban mobility platform in the globe. As specified on Uber’s blog:

we’re committed to bringing together multiple modes of transportation within the Uber app—so that you can choose the fastest or most affordable way to get where you’re going, whether that’s in an Uber, on a bike, on the subway, or more.

Among other vision, Uber also aims at “bringing safe, reliable self-driving transportation to everyone, everywhere.”

This is a bold claim, yet it would help Uber fix in one shot a critical element: automate rides and get rid of drivers.

Indeed, with its high-churn rate and difficulty in keeping up supply and demand, self-driving might make the Uber business model way more sustainable.

Uber Eats is a three-sided marketplace connecting a driver, a restaurant owner and a customer with Uber Eats platform at the center.

This model is very smart as it allowed Uber to enter another industry by leveraging its existing infrastructure, network effects, and community.

As noted in Uber Eats Business Model, the unit economics work in this way:

Amazon Prime is a key driver of long-term success for Amazon, as it enables it to keep its customers in...