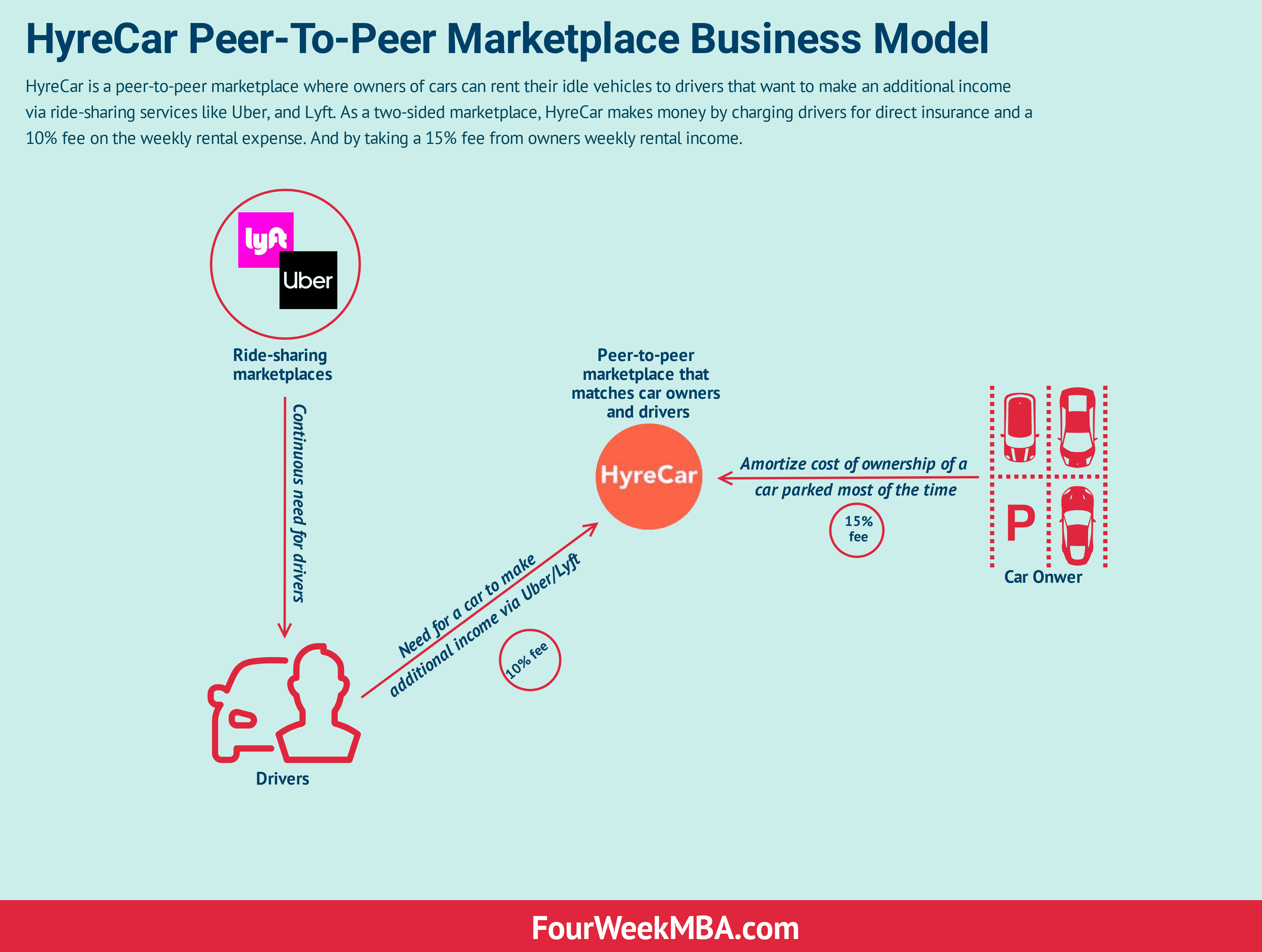 HyreCar is a peer-to-peer marketplace where owners of cars can rent their idle vehicles to drivers that want to make an additional income via ride-sharing services like Uber, and Lyft.

As a two-sided marketplace, HyreCar makes money by charging drivers for direct insurance and a 10% fee on the weekly rental expense. And by taking a 15% fee from owners weekly rental income.

HyreCar: how it works

The basic premise of HyreCar is a peer-to-peer marketplace where owners of cars can easily rent them. Drivers can easily find a vehicle fully insured to start driving for Uber and Lyft and make some additional income.

The compelling part is that HyreCar tackles two segments of the mobility industry:

However, I argue, that the whole market opportunity has been created thanks to the rise of the two-sided marketplace like Uber and Lyft.

That’s why it is like HyreCar has seized the opportunity and has created a marketplace on top of the need generated by existing marketplaces.

For instance, as we’ll see, when understanding its serviceable market HyreCar looked at local Google searches for terms like “rent a car for Uber” which pointed a clear need and intent of people to start earning additional income by renting a car and submitting it to either Uber/Lyft.

Car owners that want to amortize their cost of ownership can rent their car quite easily via HyreCar. Indeed, one of the main issues of car ownership is the fact that for most of the time it sits in one place (like the work parking lot, or home parking) without ever being used.

This implies an excess capacity of vehicles that make car sharing appealing for a few reasons:

In general, via HyreCar drivers can find a vehicle that suits them the most, submit it to Uber/Lyft and start making additional income.

Thus, a few reasons why those drivers are attracted by HyreCar value proposition is:

One key long-term success factor for Uber/Lyft is to have a constant flow of drivers to make sure they can serve their users and offer competitive pricing compared to traditional mobility industries.

Therefore, HyreCar grows on top of marketplaces like Uber and Lyft which needs a continuous stream of drivers to succeed.

Indeed, one of the risks of failure for Uber and Lyft is the inability to keep drivers going back to the platform.

That’s also why Uber has used policies of dynamic pricing, like surge pricing, to adjust the demand and offer. Therefore, HyreCar taps into that need.

At the same time, it offers a good option for people that want to temporary make a part-time income from driving for either Uber and Lyft by reducing their “entrepreneurial risk.”

In fact, who drives for Uber and Lyft is not an employee, but rather an independent contractor that has maximum flexibility on when to operate.

Let’s look now at the few pieces that make up the HyreCar business model and how they come together.

A key component to HyreCar business model is its commercial auto policy. The two-sided nature of our platform means that we need to ensure both the Driver and the Owner.

The process follows these steps

American Business Insurance Services (“ABI”) handles all of back-end insurance generation and processing. The insurance is broken down in four driving periods:

The HyreCar policy covers Period 0 or when the driver is not operating according to Uber and Lyft app. Indeed, from period 1 to 3 the insurance coverage falls on Uber/Lyft.

This insurance system is pretty ingenious for a couple of reasons.

First, usually, Uber’s drivers are covered at the moment in which they are active on the platform. This typically covers driving when picking up and dropping passengers off.

Thus, in certain period drivers might be uncovered. That happens because a regular insurance policy is not enough. Indeed, as drivers that operate via Uber/Lyft are considered “contractors,” they also need a commercial insurance policy.

In that scenario, HyreCar might take over what Uber doesn’t cover while at the same time stop covering drivers when Uber/Lyft instead covers them.

Second, HyreCar can save in insurance by only covering the period of inactivity on Uber/Lyft and leaving them the expense of ensuring riders when active on those platforms!

In a sense, it is almost like HyreCar offers a unique insurance policy by making it nearly an operator in the insurance sector.

The sales team is another critical element for HyreCar success. Indeed, HyreCar noticed that customers (both drivers and owners) that were driven through the platform on a one-to-one basis were more inclined to keep using the platform and its services for more extended periods.

This made HyreCar implement a one-man sales team approach.

The sales team is divided into:

I like to call this business model type as a marketplace over a marketplace. Indeed, as new marketplaces like Uber and Lyft take over the world, they also open up new opportunities and create a whole new set of industries.

One example we already discussed in the search world is DuckDuckGo and how it is building an entire business based on the need of people to get out from Google data collecting search engine.

In this particular case, DuckDuckGo is leveraging on an intrinsic weakness of the Google business model (it can’t live without users’ data), by offering a private navigation which only matches keywords based on location (if the user chooses to share it) yet it throws away the data on the fly rather than keep collecting it for years to come.

HyreCar has built so far a business based on a need created by marketplaces like Uber and Lyft. Its peer-to-peer car-sharing marketplace allows car owners to rent their idle cars to ride-sharing service drivers.

The advantage of HyreCar marketplace is that part-time Drivers can quickly enter and exit the market by matching their need for an idle car with the owner need to rent it.

Leveraging the gap between ride-sharing and car-sharing

HyreCar leverages on the gap created by both car-sharing services (Car2go, ZipCar, and Turo) and ride-sharing marketplaces (Uber/Lyft).

On the one hand, HyreCar taps into the unexpressed market of idle cars, that is most of the time in a parking lot, which allows owners to amortize their cost of ownership.

While it taps into the drivers, need to make an additional income.

One key element to any two-sided marketplace success is a smooth sign-up process. In this respect, HyreCar has partnered up with Lyft to allow a sign-up of drivers through Lyft sign-up portal.

This integration makes Lyft constant demand for drivers satisfied while it allows drivers to find their vehicle within a day or so (this agreement has yet to be formalized). HyreCar is also entering in similar partnerships with other players.

As a two-sided marketplace, HyreCar makes money via a fee charged to both sides. On the one hand, drivers pay a weekly rental rate, plus the direct insurance costs and a 10% fee to HyreCar. Owners get a weekly rental from which a 15% fee is subtracted.

To recap the revenues of HyreCar are broken down in:

A practical example is given by an average weekly rental of $200 and a total gross billings of $290 it makes $170 to the car’s owner and $120 to HyreCar. Below a breakdown:

For instance, in 2018 the total gross billings amounted at almost four and a half million, while the revenues for HyreCar amounted at over $1.7 million.

How did HyreCar figure its initial target market?

As pointed out in HyreCar financial prospectus they analyzed a set of keywords to determine an initial population that could be reached by the service.

When launching a marketplace or in general a service it is important to at least try to identify a TAM, SAM, and SOM.

In 2016 HyreCar identified that market in customer demographics with the Google search results by creating a Driver/Owner affinity population of over 25 million potential customers, with the bulk of the 25 million concentrated in 16 core geographic locations.

For instance, they realized that 400,000 people in Los Angeles googled keywords like, “rent a car for Uber,” “Uber,” and “Uber Leasing.”

HyreCar growth is highly dependent from its ability to tap into other marketplace lack of drivers, and its ability to keep the dominance on a market that so far seems to have a single player.

A few lessons from its business model are:

What other lessons did you learn?