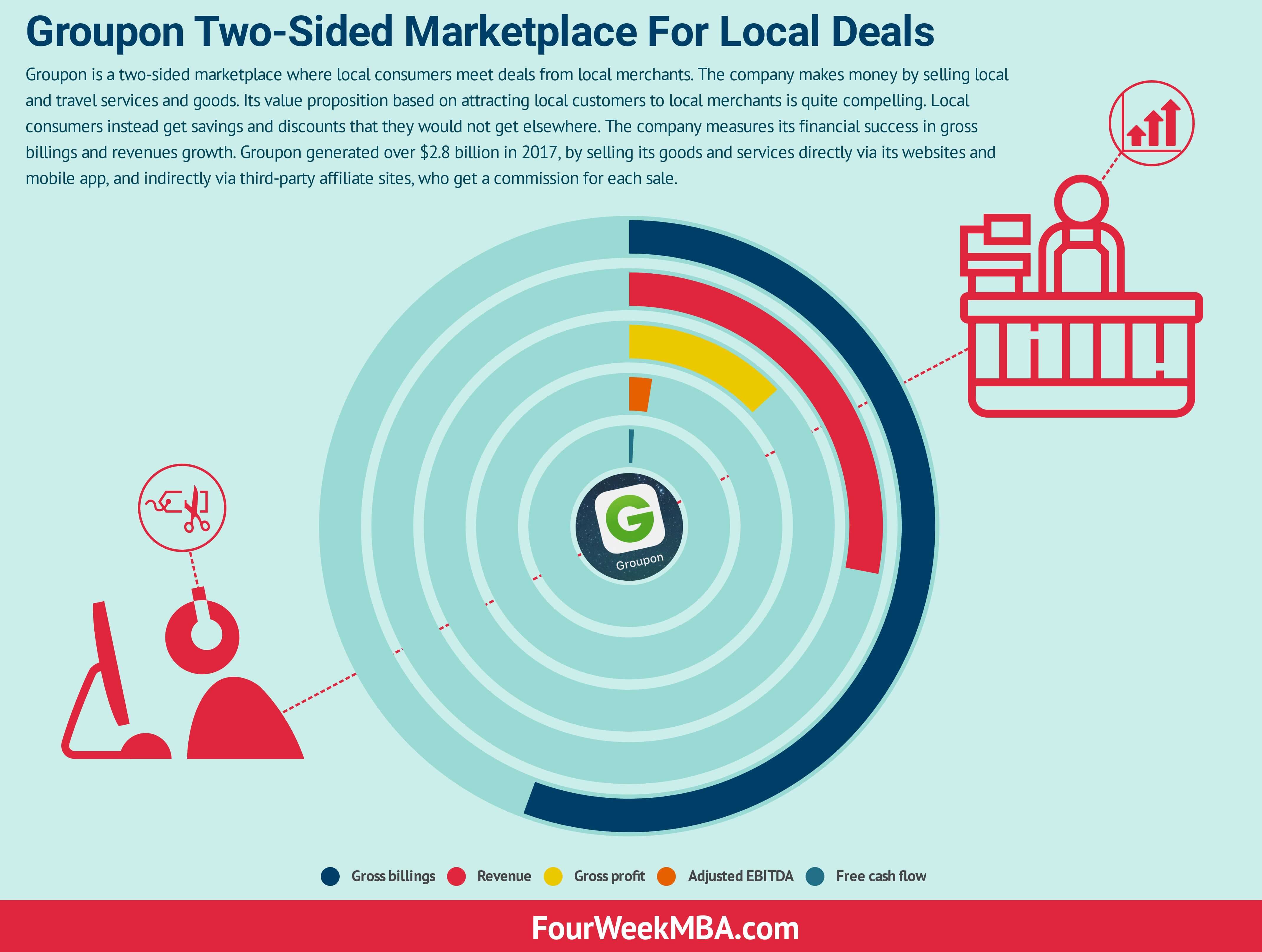 Its value proposition based on attracting local customers to local merchants is quite compelling. Local consumers instead get savings and discounts that they would not get elsewhere.

The company measures its financial success in gross billings and revenues growth. Groupon generated over $2.8 billion in 2017, by selling its goods and services directly via its websites and mobile app, and indirectly via third-party affiliate sites, who get a commission for each sale.

Related: How Does Airbnb Make Money? Airbnb Peer To Peer Business Model In A Nutshell

Groupon business model is based on a local e-commerce marketplace that connects merchants to consumers by offering goods and services at a discount. Groupon in part replaces the traditional media that local businesses have used over the years to generate sales at a local level. This includes:

The value proposition is quite simple: Groupon attracts customers to merchants, which otherwise would have missed. Consumers get savings and discounts that they would usually not get elsewhere.

Those offers are primarily run on groupon.com sites in many countries, and mobile applications.

The offerings are organized into three primary categories:

When deciding whether to allocate marketing vs. sales resources, it is critical to understand the value of a lead and potential customer on the one hand.

Thus, if a company sells expensive products made for a specific and limited target business development and sales are the key ingredient for its success.

Yet if the company sells a low-priced product that is well-suited for a mass market or consumers, then marketing will be the best option available.

On the other hand, when it comes to the acquisition and distribution process of a two-sided marketplace, it is essential to consider the acquisition process from two perspectives. For instance, the two principal partners Groupon has to create value for are:

This also implies a two-sided distribution strategy, where each of those key players will be drawn to the platform with either sales or marketing.

The value of a merchant brought to Groupon is intrinsically higher than the value of a local consumer. Therefore, Groupon will use sales processes and support to nurture the relationships with those local merchants.

Instead, to acquire local consumers, Groupon uses a marketing mix made of several marketing activities to keep the platform appealing for its local consumers which can find the offer they need.

The two ways of access to the platform are:

Let’s now look in detail at Groupon marketing and sales activities to draw local consumers and local merchants to the platform.

Marketing as the primary driver of the acquisition of local consumers

Groupon uses a variety of marketing channels with a direct to customers’ business model by making deal offerings available through its marketplaces.

The primary driver for consumers’ access is the Groupon mobile application. Indeed, in the fourth quarter of 2017, over 69% of Groupon global transactions happened on mobile devices.

This makes marketing a critical ingredient of the Groupon growth strategy and an essential component of its distribution strategy. To have some context in 2017 Groupon spent 31% of its revenues in marketing (over $400 million).

What marketing mix does Groupon use?

For a platform like Groupon that highly depends on visibility from local consumers across the globe, there is no better way to reach them than through search engines. Indeed, search engines present two key advantage:

Therefore, an SEO (search engine optimization) can have a massive ROI for a company and platform like Groupon. Via third-party search engines, consumers across the globe can access to Groupon deals. SEO has the advantage of being organic. In short, consumers get to Groupon based on organic rankings the platform has gained over the years.

Customers can access the Groupon platform also via paid listings on search engines based on bidding keywords. For instance, Google allows through its advertising network to bid on specific keywords that have specific commercial intent.

Thus, companies that look for those keywords will probably end up purchasing Groupon deals. This is called search engine marketing or SEM.

Another key ingredient of the Groupon marketing mix is comprised of direct access to consumers via an email list made of subscribers that voluntarily sign up and of push notifications (notification service to send updates on mobile devices).

That system allows Groupon a higher control over what offerings to show directly to its consumers and subscribers.

Another important marketing distribution strategy is based on affiliate marketing. In short, affiliates that send consumers to Groupon offerings via links on their websites get rewarded with a commission.

The virality of social media is also essential to allow the sharing of dealings from Groupon. Groupon also promotes its offerings using display advertising on websites.

Television and other offline.

Groupon also started to invest more in offline marketing, such as television advertising, print, and radio.

The relationship with the millions of local merchants on Groupon is critical for the long-term success of the business. Those relationships indeed are an essential part of long-term business success.

That’s also why Groupon, in 2017, had 2,400 merchant sales representatives and sales support staff. They had the role of nurturing merchant relationships and provide local expertise.

Beyond merchant sales, Groupon also leverages on deal managers to provide support in areas such as:

Deal managers and sales teams work together to optimize the deal structure, pricing, discount, and geographic mix of deals in respective markets.

The editorial department creates written and visual content on the deals offered on the platform.

The technology focuses on the design and development of new features and products, maintenance of the site and mobile platform, and improvement of the internal system.

While merchandising and logistics are responsible for managing inventory and the flow of products from suppliers to customers.

In 2017 Groupon spent over $994 million to support this infrastructure.

How does Groupon make money?

The Company generates direct revenue from the merchandise of sale inventory through its Goods category. That is also the reason why the cost of revenues for immediate is way higher than third-party revenues which are recorded on a net basis.

Third-party and other revenue

For the third-party merchant, revenue is recorded on a net basis and is presented within third-party revenue.

For third-party revenue transactions, the cost of revenue includes estimated refunds. The mechanism allows those third-party to earn commissions when customers make purchases using digital coupons via their websites and applications.

Each business’s financial success is measured according to a set of internal metrics the company uses to assess its growth.

At the same time, those metrics are communicated to outside investors to assess the state of advancement of the company.

Groupon has a massive reach, with its website alone has over fifty million visits according to Similar Web estimates (this is an estimate and not to be taken as an actual number):

Also according to Similar Web Groupon is the first site in the US for Coupons, within the Shopping category.

Still, according to Similar Web estimates, the marketing mix is skewed toward two primary channels:

Those two sources of traffic are critical as on the one hand it points Groupon strong brand and at the same time authoritativeness. Other channels like social, mail, and display also play a crucial role.

Selected business models from the site: