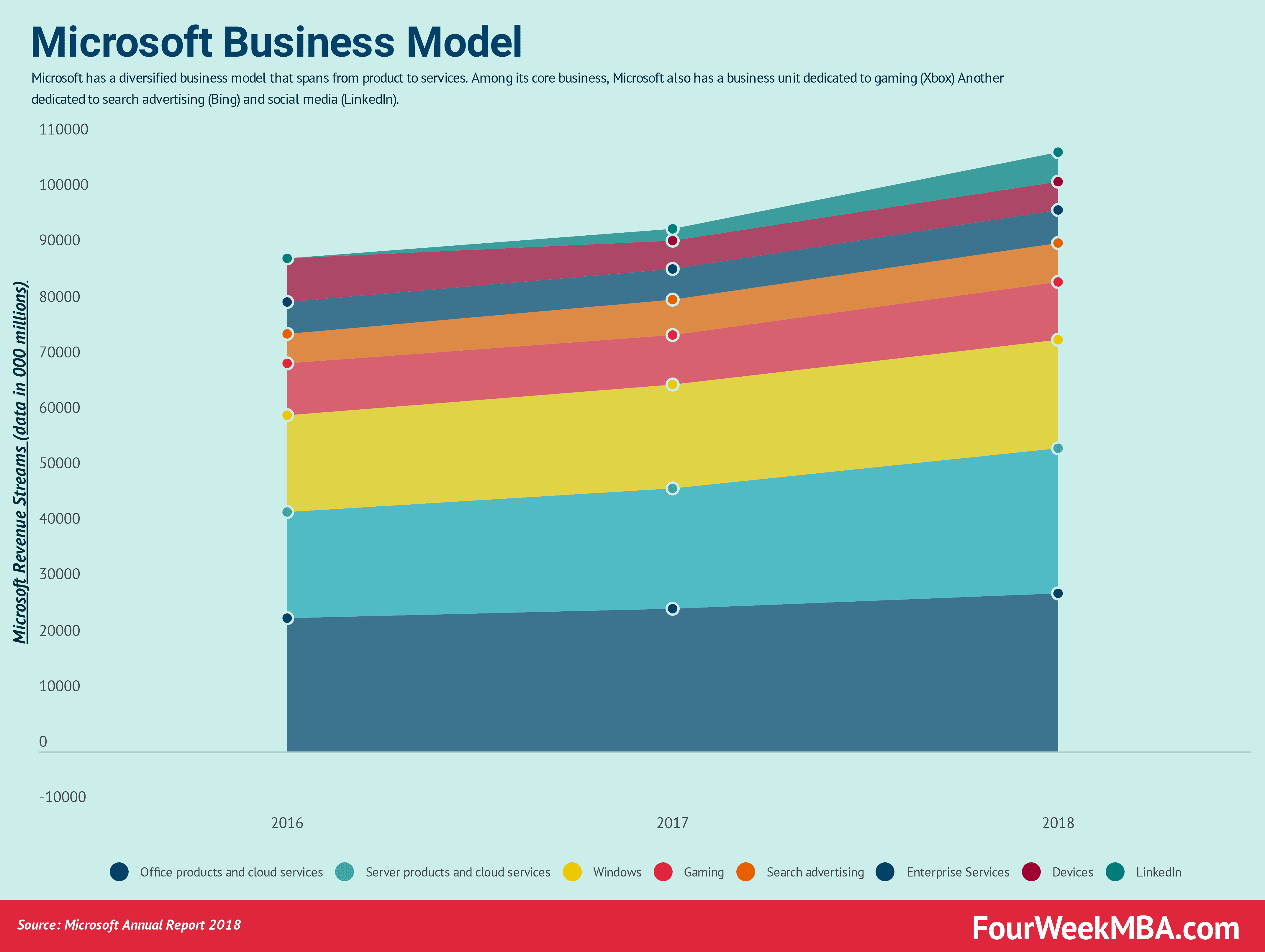 Microsoft is among the largest tech giants, which in 2018 made over $110 billion in revenues. While Microsoft Office remains the most successful product. Other parts of the business related to advertising, with the Bing search engine, has been growing fast in the last couple of years.

Also, the acquisition of LinkedIn has allowed Microsoft to enter the social media market. As a dominant tech company, Microsoft tries to keep innovating and acquiring companies that allow it to enter new markets, quickly.

When Bill Gates and Paul Allen needed to pick a name, Paul Allen reported in his memoir “We considered Allen & Gates, but it sounded too much like a law firm. My next idea: Micro-Soft, for microprocessors and software. While the typography would be in flux over the next year or so (including a brief transition as Micro Soft), we both knew instantly that the name was right. Micro-Soft was simple and straightforward. It conveyed just what we were about.“

So how did Bill Gates end up with the majority of the company? Still, according to Paul Allen memoir “From the inception of Microsoft, Bill insisted he got a 60-40, then 64-36 share of the money.”

While Paul Allen accepted – for some reasons – the 60-40 deal, so that more shares would go to Bill Gates – mostly on the basis that Bill Gates had contributed more on the code – Bill Gates tried again to get hold of more shares of Microsoft. That attempt though wasn’t successful.

In a few years, Microsoft would become the dominant tech company in the world.

It is important to remark this is the side of the story told by Paul Allen, seldom mentioned Microsoft co-founder. The accounts from Paul Allen reflect his perspectives on Microsoft in its first years.

The most prominent institutional investors are The Vanguard Group and Blackrock.

What is the Microsoft pay mix?

Microsoft has a pay based on three main aspects:

To create a proper compensation, Microsoft looks at a group of peers that comprise:

Based on that Microsoft compensation comprise 73.2% of base salary, followed by 19.2% of cash incentives, and 7.6% of equity.

What are Microsoft Segments?

Microsoft segments can be broken down into four main types:

Productivity and Business Processes segment consists of products and services in the portfolio of productivity, communication, and information services, spanning a variety of devices and platforms. This segment primarily comprises:

Productivity and Business Processes segment consists of products and services in the portfolio of productivity, communication, and information services, spanning a variety of devices and platforms. This segment primarily comprises:

More Personal Computing segment consists of products and services geared towards harmonizing the interests of end-users, developers, and IT professionals across all devices. This segment primarily comprises:

Microsoft develops most of its products and services internally through the following engineering groups.

From its financial statements you can see how Microsoft has netted over $110 billion in revenues in 2018, compared to over $96 billion in 2017.

Productivity and Business processes, together with the Intelligent Cloud were the fastest growing businesses.

How does Microsoft really make money?

If we look at the operating income and operating margin of each segment, it’s interesting to notice how while the More Personal Computing line of business is the segment that contributes most to Microsoft revenues.

If we look at each Microsoft product, we can see how the Office products are the ones that most contribute to Amazon revenues, together with cloud services. Windows licensing is also, at this stage, still an important contributor to Microsoft overall revenue.

The company’s pretty diversified and it also makes money in Gaming (with products like Xbox), search advertising (with Bing), Devices and LinkedIn.

How Does LinkedIn make money?

Microsoft has been heavily investing in LinkedIn, by updating several times its algorithms and make the platform as compelling as possible to professionals. And it also invested in sales and marketing activities to expand the operations of LinkedIn, which also explains the big jump in revenues.

What is Azure? How the Microsoft cloud service is growing at a fast speed

Thus, the increase in revenues for the intelligent cloud is primarily due to Azure growth.

Cloud is powering up the businesses of several tech giants, from Amazon AWS to Google Cloud, this business unit has become a critical component for those companies profitability.

How much money does Bing make?

If we look at the advertising revenues generated by Microsoft – which can be primarily attributed to Bing – those amount to over $7 billion in 2018. That makes Bing another important piece of the pie for Microsoft overall revenues.

However, if we compare Bing advertising revenues with Google’s over $116 billion for 2018; you can understand that Bing is still a minor player. However, Google’s advertising revenues also comprise YouTube, for which we don’t know the revenue breakdown yet, but we can assume to be at least a $15 billion business a year.

Other players like Amazon and Facebook are also dominating the digital advertising industry, which makes the landscape very competitive for Bing.

GitHub acquisition: how will Microsoft monetize that?

In June 2018, Microsoft bought GitHub for $7.5 billion in an all-stock transaction. GitHub is among the most known open source libraries which enable companies of any size to store their codes. While its free-to-use public open-source library is the most known, the company also offers enterprise solutions.

While presumably the company never managed to turn profits, it seems that Microsft high valuation on the company can be seen as a way to enhance Microsoft product line, by enabling the existing Microsoft customer base to purchase GitHub plans.

The bet is that Microsoft current salesforce can be able to integrate GitHub’s offering within its sales portfolio, thus make GitHub profitable within Microsoft overall operations.

What are the Microsoft distribution channels?

Those can be broken down in:

Does Microsoft spend more on Research and Development or Sales and Marketing?

What are Microsoft top products and services?

From the revenue standpoint, Microsoft Office remains the most successful product. The game console Xbox also plays a key role in  Microsoft financial success. While Advertising, mainly through the Bing search engine has been growing fast in the last couple of years. Also, the acquisition of LinkedIn has allowed Microsoft to enter the social media market.

In fact, as specified in its annual report for 2017, “The core currency of any business going forward will be the ability to reason over its data using AI to drive competitive advantage. Microsoft Research continues to make significant advances in AI technologies, infusing them into product experiences like Bing, Cortana, LinkedIn Newsfeed, Skype Translator, Editor and PowerPoint Designer in Office, Relationship Health in Dynamics, HoloLens, and many more. We are uniquely positioned to take this AI capability and democratize it so that every developer can be an AI developer, and every company can become an AI company.”

Starbucks highlights its mission as "to inspire and nurture the human spirit – one person, one cup and one neighborhood...