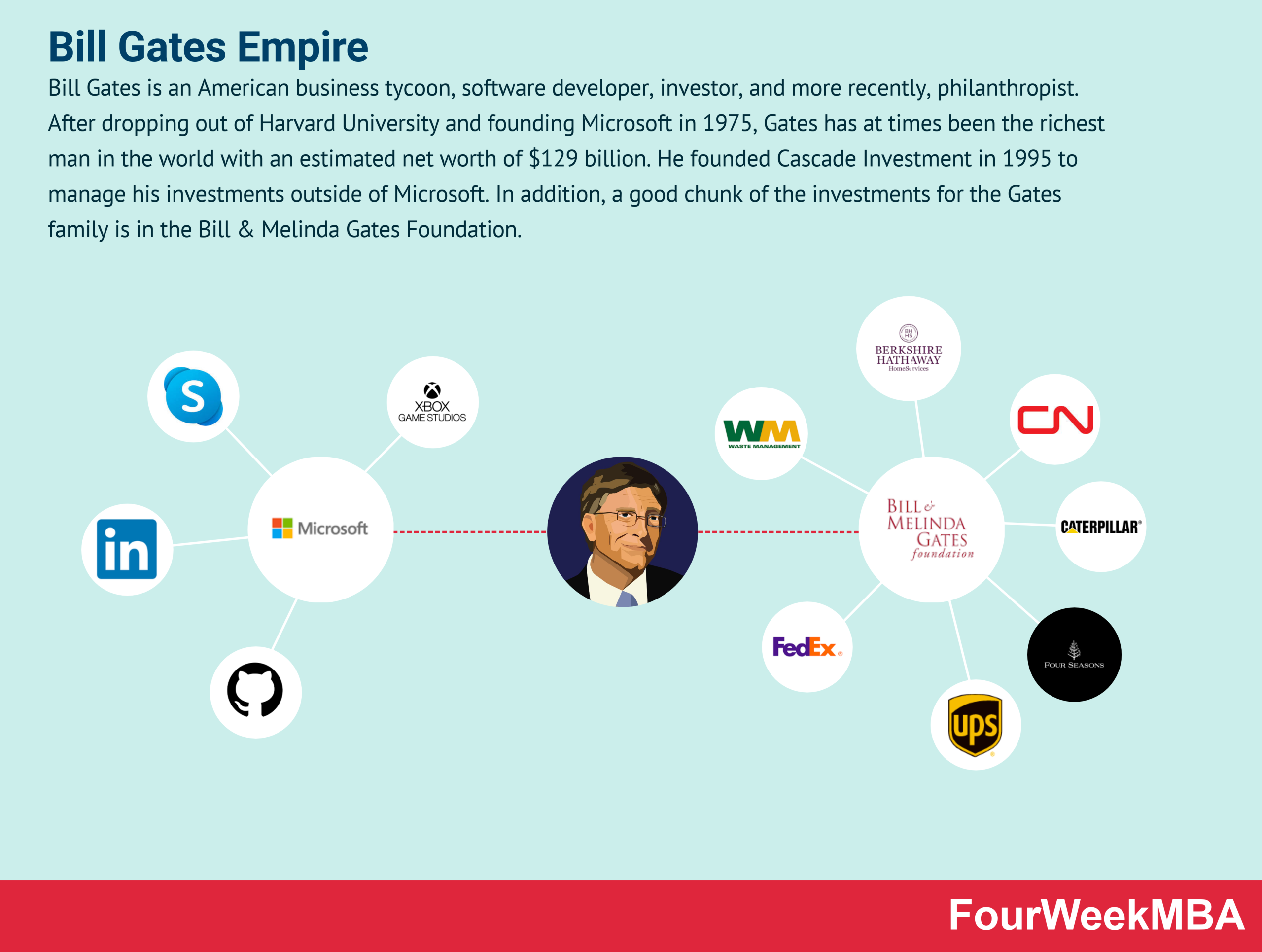 Bill Gates is an American business tycoon, software developer, investor, and more recently, philanthropist. After dropping out of Harvard University and founding Microsoft in 1975, Gates has at times been the richest man in the world with an estimated net worth of $129 billion. He founded Cascade Investment in 1995 to manage his investments outside of Microsoft. The firm employs over 100 people and has significant stakes in hotel, rail transport, beverage, and waste management companies. To further his philanthropic causes, he founded the Bill and Melinda Gates Foundation in 2000. The foundation holds almost $47 billion in assets and tackles entrenched global issues around poverty, healthcare, and climate change. The foundation also has several trust investments in companies such as Berkshire Hathaway, Caterpillar, FedEx, Walmart, and UPS.

In popular culture, Microsoft is the company most commonly associated with Bill Gates.

But in truth, Gates sold most of his shares in the company in 2000 – the same year he stepped down as CEO. He now serves as a technical advisor and has relatively little to do with day-to-day operations.

Having said that, he maintains a 3.6% stake in the company through Cascade Investment. The Bill and Melinda Gates Foundation also has a small stake.

Berkshire Hathaway represents the largest holding of the Bill and Melinda Gates Foundation, owning approximately 7 million shares with a market value of $7 billion.

Gates and Berkshire Hathaway founder Warren Buffett have been close friends for several decades. Both have also attracted significant praise for donating a large proportion of their wealth to philanthropic causes.

Four Seasons Hotel and Resorts is an international luxury hotel and resort company.

Founded in 1961, the company operates more than 100 hotels and resorts around the world. Gates together with Prince Al-Waleed bin Talal of Saudi Arabia own 95% of the company in shares after a $3.8 billion investment in 2007.

Canadian National Railway is the third-largest holding of the Bill and Melinda Gates Foundation. Through the foundation and his personal investment company, Gates is the largest single shareholder at approximately 10.04%.

In addition to rail, the company provides integrated transportation services in trucking, warehousing, and freight forwarding.

Caterpillar is a manufacturer and designer of heavy vehicles used in the energy, mining, and agriculture industries. It also sells financial products such as insurance to customers through a global dealer network.

The company is the fourth-largest holding of the Bill and Melinda Gates Foundation.

Curiously, Gates has significant stakes in UPS and FedEx. Both are American courier companies that are also direct competitors.

His investment in these companies is generally viewed as a way to profit from the growing eCommerce trend.

Waste Management, Inc., is the second-largest Bill and Melinda Gates Foundation holding. The foundation has almost 19 million shares with a market value of $1.97 billion.

The company is a provider of waste management services in the United States with over 21 million residential, commercial, and industrial customers. It is also involved in several green initiatives including the conversion of landfill gas into electricity.