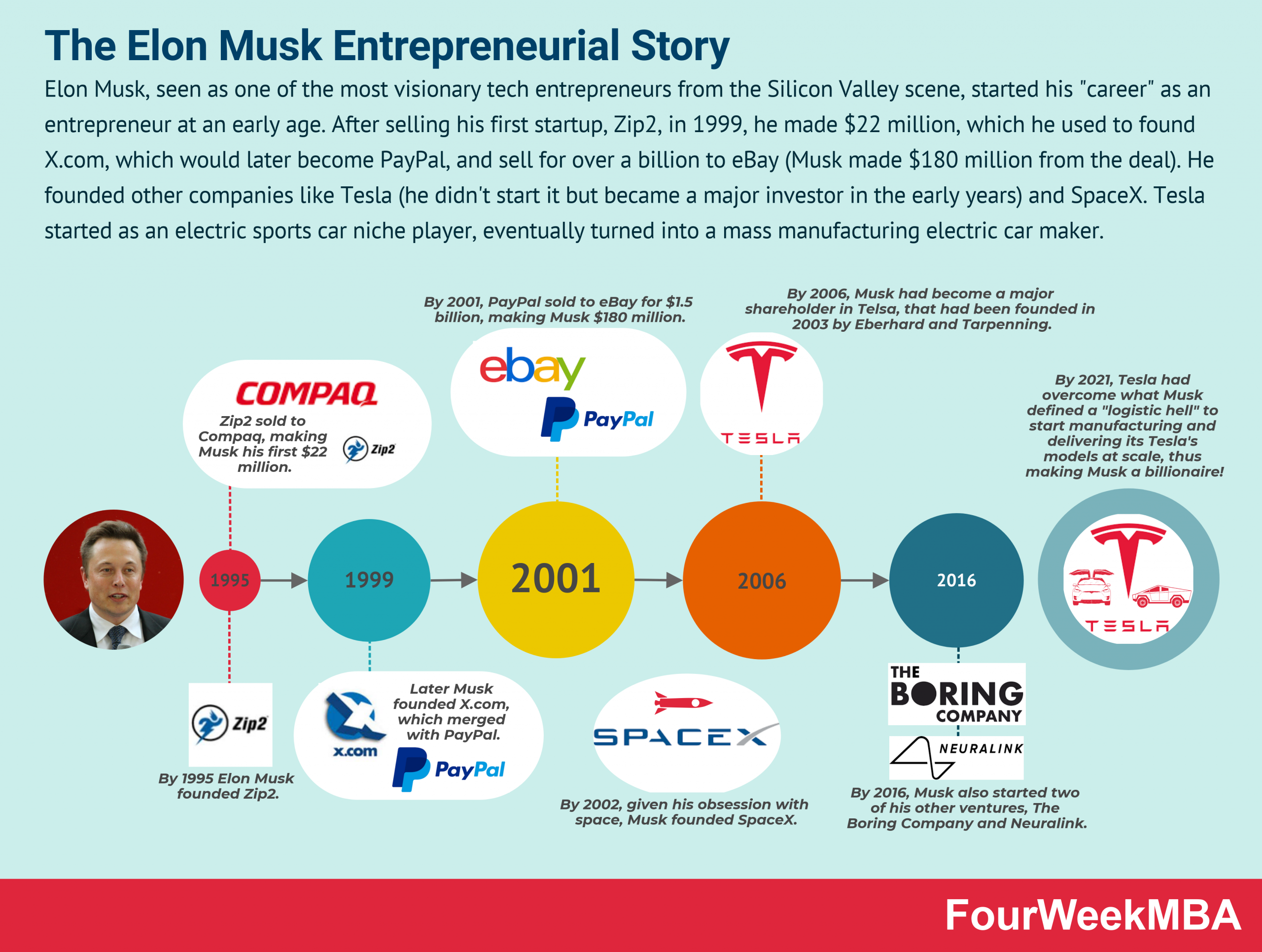 Elon Musk, seen as one of the most visionary tech entrepreneurs from the Silicon Valley scene, started his “career” as an entrepreneur at an early age. After selling his first startup, Zip2, in 1999, he made $22 million, which he used to found X.com, which would later become PayPal, and sell for over a billion to eBay (Musk made $180 million from the deal). He founded other companies like Tesla (he didn’t start it but became a major investor in the early years) and SpaceX. Tesla started as an electric sports car niche player, eventually turned into a mass manufacturing electric car maker.

How did Elon Musk become wealthy? The full business story

Elon Musk’s wealth increased exponentially when one of his major bets, Tesla, became among the most valued companies on earth. Elon Musk started from a very early age building tech startups.

With the capital from Zip2, Musk founded X.com in 1999, one of the first FDIC-insured online banks in the world. After seeing promise in its easy payment service.

At the same time, a company named PayPal, as a money-transfer system, had been founded in 1998 by a company called Confinity.

At the time, Confinity had a fierce competitor, called X.com. Rather than competing, the two companies merged by bringing them together under the umbrella of PayPal.

Once the company merged, they could finally focus on the commercial strategy. Rather than boiling the ocean, PayPal started with a small niche at the time, until they monopolized it and grew further.

Musk merged his company with Confinity the following year. In 2001, the company became PayPal and Musk became an 11.7% shareholder.

When eBay acquired PayPal for $1.5 billion in 2002, Musk received $180 million which he would later reinvest into some of his most famous passion projects.

Indeed, it seems that at the time most PayPal users were coming from eBay. As reported by a release on July 2002:

The agreement also should benefit eBay shareholders. The combination of the two networks should expand both platforms while minimizing shared operational costs. Strengthening the marketplace and realizing the efficiencies made possible by the acquisition will increase the value of both businesses.

PayPal would be also an extremely important hotbed, for what would be later called “PayPal Mafia” a group of smart people that went on to fund many of the companies that created an impact over the Silicon Valley tech ecosystem:

After two decades from PayPal acquisition from eBay Elon Musk went on to create some of his most prominent ventures:

When Tesla was a niche electric sport’s car maker

Tesla is perhaps the biggest accelerator of Elon Musk’s net worth.

The company became among the most valued tech companies in the last years.

The electric carmaker company now owned by entrepreneur/visionary Elon Musk was founded by Martin Eberhard and Marc Tarpenning in July 2003.

By 2006 Musk joined, first as investor and chairman, then he took the role of CEO which he still holds today. Musk is the major Tesla’s shareholder:

Back in 2012, Elon Musk explained the vision for the company:

“In 2006 our plan was to build an electric sports car followed by an affordable electric sedan, and reduce our dependence on oil…delivering Model S is a key part of that plan and represents Tesla’s transition to a mass-production automaker and the most compelling car company of the 21st century.”

By starting with a niche strategy, mainly focused on proving an electric sport’s car could be delivered in a premium market, Tesla slowly, then quickly ramped up its new models to cover wider and wider sections of the market, and it ramped up its manufacturing capability.

Beyond early adoption, using a transitional business model to scale up

The hardest part for Elon Musk has been the scale up of Tesla’s manufacturing facilities. In what Elon Musk would later recall as a “logistic hell.”

Going almost bankrupt to pass beyond the “logistic hell”

Between mid-2017 to mid-2019 Tesla has been very close to bankruptcy for lack of liquidity.

As Elon Musk has explained in a Tweet back in November 2020:

Closest we got was about a month. The Model 3 ramp was extreme stress & pain for a long time — from mid 2017 to mid 2019. Production & logistics hell.

As Elon Musk further explained in that Twitter thread:

I put in my last money, even though I thought we would still fail. But, it was either that or certain death for Tesla. Extremely difficult to raise money for an electric car startup (considered super quirky back then), while stalwarts like GM & Chrysler were going bankrupt.

Indirectly, the Tesla share price appreciation is the result of a new wave of younger investors and strong demand for electric vehicles – particularly from China. A Biden election win has also helped Tesla benefit from legislation designed to bring electric vehicles to the mainstream.

Today Tesla is an electric empire, which potential goes way beyond the automotive sector!

Musk has always had a passion for space exploration. Even before the eBay acquisition of PayPal, he conceived of greenhouses to grow food crops on Mars. Such was his passion that he traveled to Moscow to purchase intercontinental ballistic missiles that could send payloads into space.

In Moscow however, Musk was seen as an amateur and rejected. Undeterred, he returned to the U.S. and founded SpaceX in 2002 using $100 million of his own capital. In 2008, SpaceX received a $1.6 billion NASA grant for rockets to resupply the International Space Station. The company then became the first to berth a private vehicle with the ISS. Reusable rockets with large payloads were also launched into space and successfully returned to Earth using SpaceX autonomous drone ships.

By March of 2018, SpaceX had over 100 launches on its manifest worth approximately $12 billion in revenue. SpaceX’s most recent contract is the $2.89 billion NASA program to carry American astronauts to the moon.

The greatest marketer of our times

While for large companies demand generation can be easily bought. For startups it’s more complicated, because they need to do that with a few resources. Indeed, spending most of the budget with demand generation is too risky in the short-term.

Yet, creating demand for your product is the most important long-term strategy as it will make the difference between selling a commoditized product at no margins instead of a premium-priced product (which gives the business enough resources to keep financing its R&D, marketing, and operations).

Let’s use an emphasized example by the master of all PR stunts: Elon Musk (indeed also the greatest salesman alive).

To be good at demand generation at no cost, you need to think obliquely. In short, rather than promoting directly your product, as you would do in a traditional ad, with demand generation you promote it indirectly, through something that is so compelling, that will drive attention and money to your main business.

For instance, in 2018, Elon Musk tweeted a video where he handled a flamethrower:

As of 2021 the Boring company has sold over 20,000 flamethrowers, which as you might imagine helped finance the core business of Musk’s venture:

At first sight that doesn’t make any sense. And yet, this unconventional stunt made the company ten million dollars (flamethrowers were selling for $500 each) in revenues that could be reused toward the innovative projects the company is working on.

The flamewthover could be bought for cheaper elsewhere, but who bought it felt part of something (and indeed could resell it at a much higher price later on, as those were limited pieces).

This of course is an extreme example, but you get the idea. Startups can generate demant when they use unconventional marketing tactiques (lateral vs. linear thinking), oblique (indirect vs. direct promotion) and centered on making other people feel good about themselves (the iPhone could have never scaled at that premium price if it was only a smartphone).