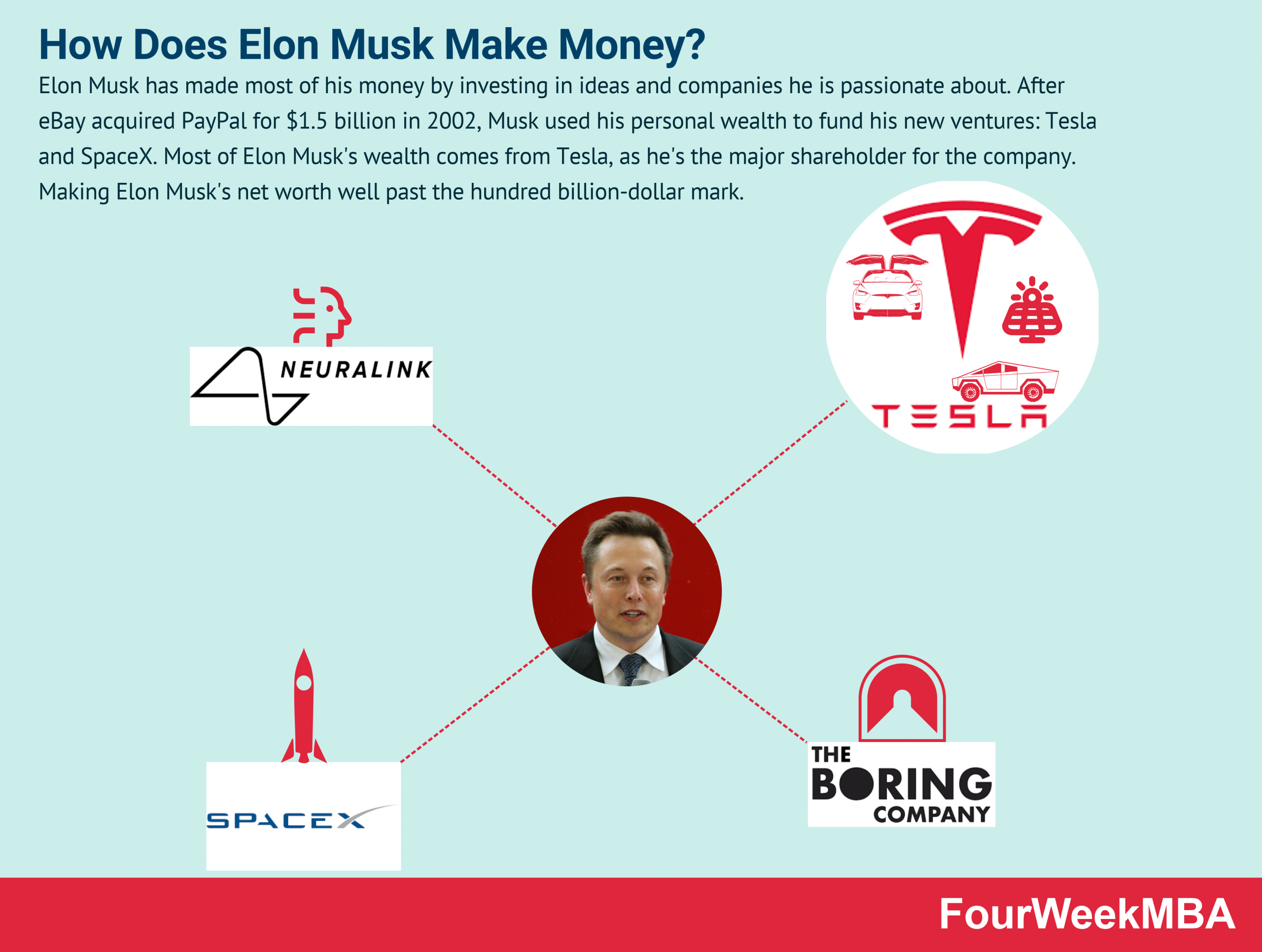 Elon Musk has made most of his money by investing in ideas and companies he is passionate about. After eBay acquired PayPal for $1.5 billion in 2002, Musk used his personal wealth to fund his new ventures: Tesla and SpaceX. Most of Elon Musk’s wealth comes from Tesla, as he’s the major shareholder for the company. Making Elon Musk’s net worth well past the hundred billion-dollar mark.

Perhaps counterintuitively, billionaire entrepreneur Elon Musk owes much of his financial success to not focusing on making money.

Musk has largely invested in ideas he is passionate about, with the viability of an idea being a more secondary concern to pursuing it. As a child, he had a passion for code, selling the source code for his first video game for $500 at age 12.

In 1999 he founded X.com, one of the first FDIC-insured online banks in the world. After seeing promise in its easy payment service, Musk merged his company with Confinity the following year. In 2001, the company became PayPal and Musk became an 11.7% shareholder.

When eBay acquired PayPal for $1.5 billion in 2002, Musk received $180 million which he would later reinvest into some of his most famous passion projects.

He is also a proponent of the spend-money-to-make-money philosophy. Indeed, Musk is a notorious workaholic who prefers to reinvest capital into his businesses over lavish vacations.

Musk has always had a passion for space exploration. Even before the eBay acquisition of PayPal, he conceived of greenhouses to grow food crops on Mars. Such was his passion that he traveled to Moscow to purchase intercontinental ballistic missiles that could send payloads into space.

In Moscow however, Musk was seen as an amateur and rejected. Undeterred, he returned to the U.S. and founded SpaceX in 2002 using $100 million of his own capital. In 2008, SpaceX received a $1.6 billion NASA grant for rockets to resupply the International Space Station. The company then became the first to berth a private vehicle with the ISS. Reusable rockets with large payloads were also launched into space and successfully returned to Earth using SpaceX autonomous drone ships.

By March of 2018, SpaceX had over 100 launches on its manifest worth approximately $12 billion in revenue. SpaceX’s most recent contract is the $2.89 billion NASA program to carry American astronauts to the moon.

Tesla is perhaps the biggest accelerator of Elon Musk’s net worth. When the company debuted on the stock market in 2010, Musk instantly amassed a personal fortune of $2 billion.

In 2018, he bought more than $35 million worth of Tesla shares to take his total to approximately 241 million shares. Given that Tesla shares are valued at just over $700, it is not difficult to appreciate how wealthy Tesla has made Musk.

Indirectly, the Tesla share price appreciation is the result of a new wave of younger investors and strong demand for electric vehicles – particularly from China. A Biden election win has also helped Tesla benefit from legislation designed to bring electric vehicles to the mainstream.

Today Tesla is an electric empire, which potential goes way beyond the automotive sector!