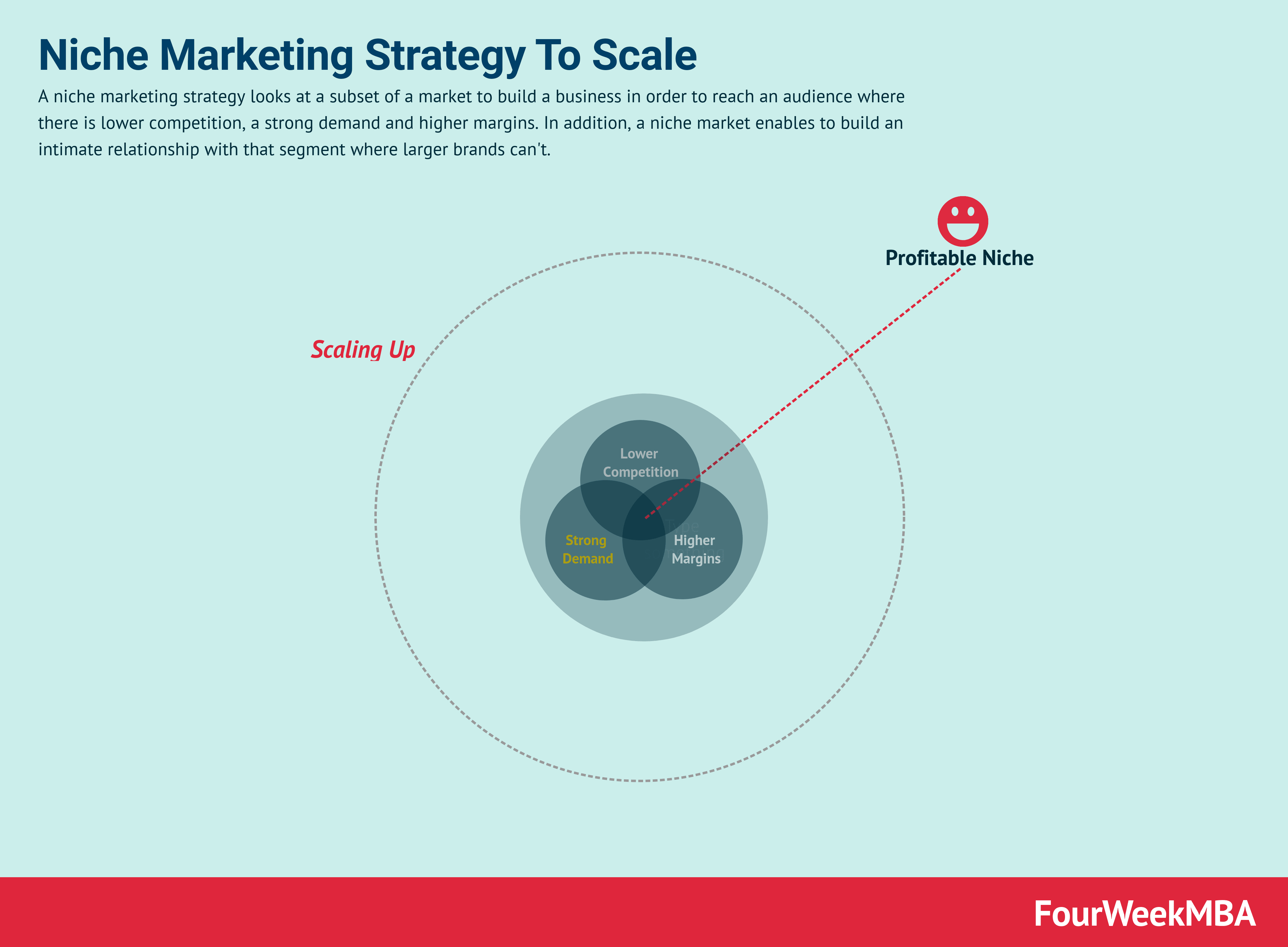 While in the past, it was possible through mass marketing and mass advertising to reach a massive audience. With the advent of the web, it has become possible to target particular segments of a market with a laser focus approach.

For instance, instruments like Facebook or Google Ads enable marketers and entrepreneurs to target in utmost detail the specifics of the audiene they want to focus.

It can be broken down based on many specifics, things like:

For a complete guide on Market Segmentation check this out.

In the short-term, we’re all starting from a niche market

Companies like PayPal, Facebook, LinkedIn, and Amazon, didn’t start right away as tech giants, ready to take over the world.

True, their founders did have (in some cases) a big vision. On the other hand, they started very – or relatively – small. Before Amazon expanded to pretty much sell anything, it was an online bookstore.

Before Facebook would become the largest social network on earth, it wasn’t the first player to come in (it was a late comer), but it had a very focused strategy, based on a staged rollout. Facebook made sure to open up, one campus at the time, and only when it had a waitlist that ensured high adoption, it opened up to the next college.

In short, before Facebook would become the social network for everyone, it was explicitly thought for specific campuses in the US.

Therefore, when you’re starting up, it makes sense to identify a niche market. This can be based on several factors, such as opportunity, understanding of the segment, passion, and more.

An excellent way to find a niche might be to mix all those factors:

A niche market is the best place to start for three primary reasons.

A niche market is usually unfulfilled. As large corporations take most of the market share of a broader market, they also tend to standardize service and product, at the point of leaving out a small segment of it. That is where the opportunity lies.

A large business operating in a large market can hardly accommodate the needs of all the niches within that market. Those unmet needs are where you can build a business. The search engine DuckDuckGo has built a company where Google could not.

Indeed, DuckDuckGo (DDG) started very late (around 2008), over a decade after Google. If Gabriel Weinberg (DDG’s founder) would have told someone he was creating a search engine, chances are none would have made sense of that move.

However, he started by looking at where Google was weak. And among those weaknesses, there was privacy. Google (now Alphabet) makes money primarily via advertising.

Therefore, the whole company business model still revolves around collecting people’s data and reselling it on its advertising network.

Thus, DDG revolved its business model around privacy, where Google could not, as this would have jeopardized its core business model.

Over the years, as privacy concerns arose, DuckDuckGo grew on top of that. In August 2018, DDG got another round of investing for $10 million. Thus, getting ready to scale up.

For how much we love the mantra of competition, as Peter Thiel, founder of PayPal mentions in his book, Zero to One, companies that dominate markets and reduce competition, so-called monopolies, are also the ones that hide this fact for as long as possible as low competition enables them high margins and status quo.

For a company that is starting and it is niching down, a small segment of a broader market helps kick things off. Imagine the scenario where other larger competitors are already serving that segment that would require massive resources for the niche player, thus making it extremely hard to build a company in the first place.

Building a successful company and a viable business model is also about guaranteeing high margins. Part of those margins can be reinvested back into the business.

A niche market usually has a strong demand and lower competition, which makes it easier for the niche player to charge higher prices.

The web enables you to look for your niche pretty much all over the world. A few thousand people looking for bread recipes, or raw food can be a good place to start.

The web enabled anyone to start a business with limited resources. On the other hand, you better understand what people in that niche are looking for, and you connect with them.

Thus, rather than just creating a business, you might want to build a community first.

Why? Tech companies like Google and Facebook have become pretty good in reaching out to any audience. This means that if you wish to build a company out of a niche, you can’t just be a company.

You better make sure to create a sense of intimacy with your community.

Where large brands can’t build this sense of belonging, that is where a niche player would be a way better option for that segment!

And This is where you have the opportunity to build your next business.

The era of Gatekeepers

Gradual doesn’t mean necessarily slow growth. In many cases, if the growth strategy is organized around a staged roll out (you open up your products to wider and wider groups of people) it can pick up quickly.

The advantage of using this strategy is threefold:

The case for the Microniche: Zooming into existing markets to find Blue Seas

As we’re living in an era where the web has created many new industries, some of which are now mature. This makes us redefine the concept of niche, in those markets.

Perhaps if you decide it makes sense to build a website or an app. While you can do that with limited resources, you will find yourself in a read ocean, made of many existing alternatives, that are so similar to yours, costumers will not perceive it as valuable.

In this read ocean, it’s extremely hard to swim. Does it mean you should always look ten years ahead to find your blue ocean? Not really, I believe that a blue ocean can also be found by zooming into existing industries, to find micro audiences that are not satisfied with any of the products available.

This blue sea, much much smaller, partly covered by land, will be your territory.

The process of innovating by drilling down existing markets, is at the core of a renewed blue sea strategy, where you add the most value for a few, and yet that will be the basis to build your business.

Drilling down to your Minimum Viable Audience

As a simple example, imagine the case you’re staring a bookstore online. None would find that interesting. At least not today. This idea was already proved commercially viable by Amazon, at the and of the 1990s.

Therefore, you will need to zoom into the publishing industry and curve out your own niche first.

For that, the major gatekeeper in the publishing industry can help you out. You can use Amazon search engine to identify your own category. This is only the first step.

To make the exercise of finding your micro-category viable you need to drill down at least three times to what you might think is a viable audience.

Thus, if you start from fiction, this is the process:

Now you found your microniche. What about building up the best website/blog about Renaissance Historic Fiction?

How do you know there is a viable audience for that?

One simple way, perhaps, is to look at the volume of search in that category, especially for the most known authors (you might be surprised to find out there are micro-stars also within that microniche).

For instance, Johanna Lindsey is a great example of an author that has an incredible engaged following in a microniche. This is an example of how you kick things off and find your Minimum Viable Audience.

Bootstrap to create options to scale

When DuckDuckGo started back in 2008, it wasn’t a company made of dozens of employees. To be sure, its founder, Gabriel Weinberg had the cash to hire developers, and employees.

If he wanted, he could have invested massive cash upfront to try to compete with Google.

Instead, he did something else. He started to code the search engine on its own, and he curved the (at the time) a microniche for DuckDuckGo, a search engine focused on privacy.

Only later, after validating the idea, DuckDuckGo turned into a larger company. In this specific case, Weinberg had the technical skills to get things off the ground but also the cash from a previous successful exit to start in a more grandiose way, without validation.

Instead, he tested, validated, iterated quickly, and then he built options to scale. Its search engine turned into a larger organization, made now of dozens of employees.

In a Blue Ocean Strategy, there are five core concepts:

Reintermediation consists in the process of introducing again an intermediary that had previously been cut out from the supply chain....