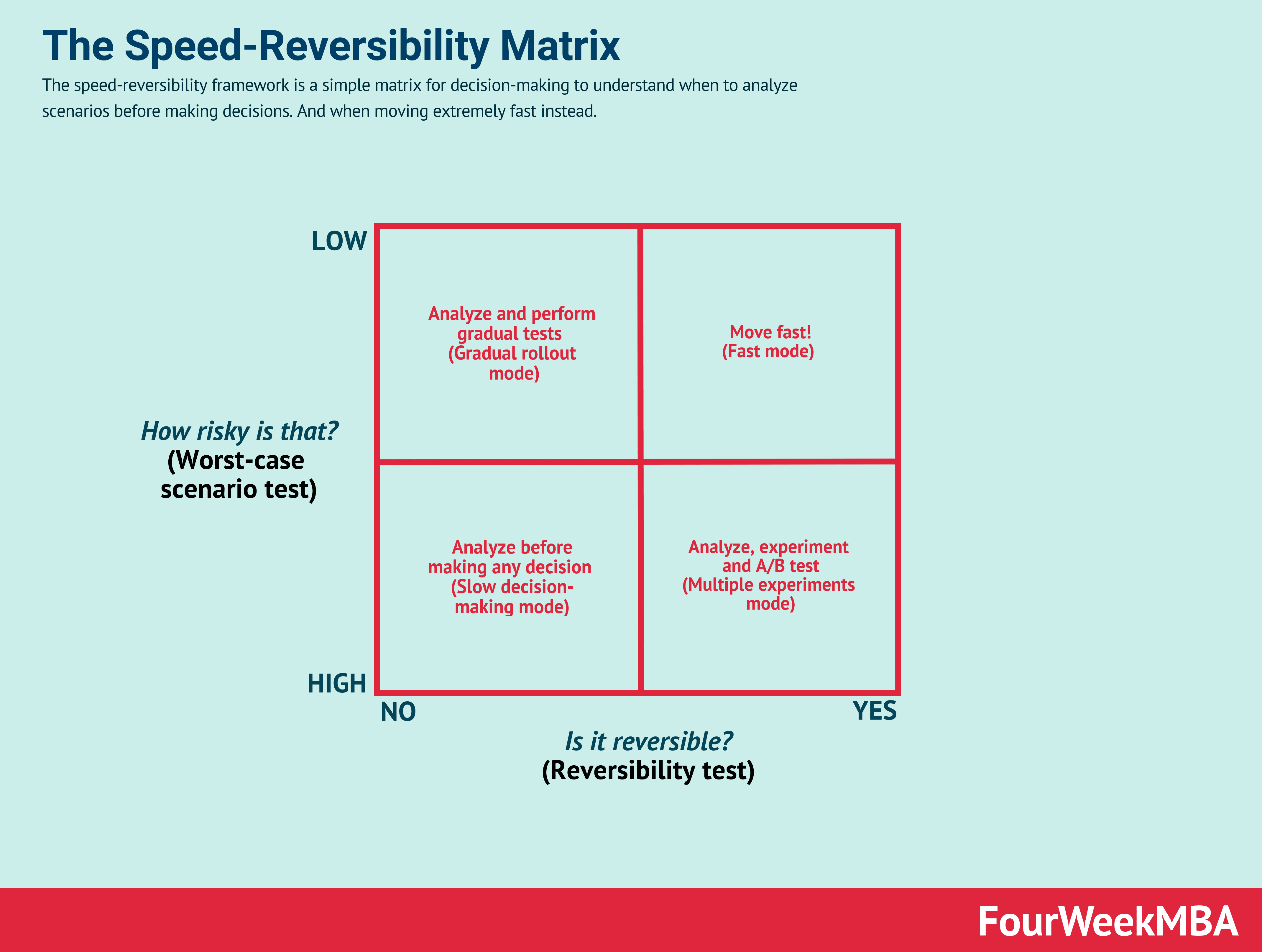 The speed-reversibility framework is a simple matrix for decision-making to understand when to analyze scenarios before making decisions. And when moving extremely fast instead.

As you dive into the entrepreneurial world, you might struggle to make things work. And as that happens, you start looking for resources online to help you out throughout that process.

Chances are you’ll stumble on an article about making a sound decision by using data, and you turn to a data-science degree, instead of focusing on growing your business.

For that sake of that, a simple matrix like the speed-reversibility matrix can help you out.

When do you need data?

In a world where data is available anywhere, it’s easy to draw in that. Thinking you always need data to back up any decision. In reality, in many cases, your guts, your vision, and your deep understanding of the kind of business you want to build might be your sharpest tools.

In general, for a short-term decision quantitative analyses, data might help you tune processes. When it comes to long-term vision, you might want to rely on your guts.

As an entrepreneur, you’re not trying to be right most of the time. You instead should make sure to be right once and profit a lot from it. While avoiding the risk of massive failure.

For the sake of it, you need:

When you’re missing both these elements, you already know that data can help better understand what you’re doing even if it slows down the decision-making process.

Another key element is about evaluating the worst-case scenario. What would happen if things would turn out extremely bad?

Would this scenario be reversible? Would this imply a complete failure? Would I sacrifice all the progress made so far?

Based on these elements, you might have four decision-making options.

When the worst-case scenario looks pretty grim, and that can’t be reversed. You better gather as much data as possible about what you’re about to do.

Indeed, it doesn’t matter how large will be your payoff. If things will turn bad, you might have too much to lose.

When the worst-case scenario doesn’t look bad, yet it’s not reversible, you might still want to analyze. And gradually roll out the decision, rather than fully commit to it.

When the worst-case scenario is highly risky, but it can be reversed. You want to perform as many small experiments as possible.

When the worst-case scenario doesn’t seem to be risky at all. And it is reversible. You can move at full speed. In that case, you won’t need data. Rather the data will come to you as a result of execution.

In this mode, you can have as much fun as possible.

Thus, the question might be, “how do I find a low-risk worst-case scenario, which is reversible?”

Lindy Effect: Why Ideas And Technologies Might Age In Reverse