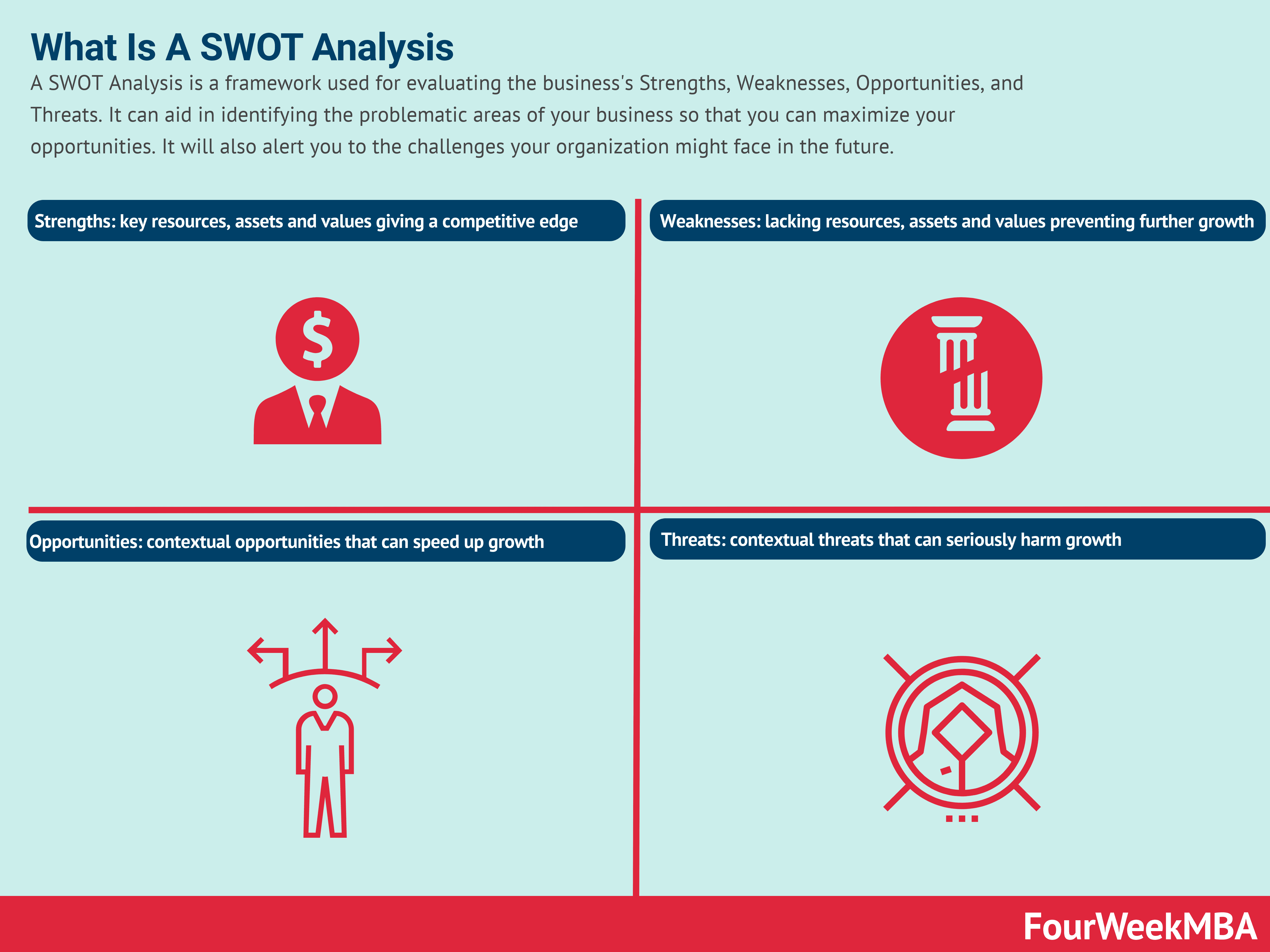 A SWOT Analysis is a framework used for evaluating the business’s Strengths, Weaknesses, Opportunities, and Threats. It can aid in identifying the problematic areas of your business so that you can maximize your opportunities. It will also alert you to the challenges your organization might face in the future.

What is a SWOT analysis?

The SWOT analysis is a framework and matrix used for evaluating a business’s Strengths, Weaknesses, Opportunities, and Threats with the objective of making informed strategic decisions.

Is a SWOT analysis useful?

A SWOT analysis is an effective exercise to get to know a business and look at it from several angles. However the business world is highly unpredictable, thus the SWOT analysis is useful as long as it promotes action, or it prevents actions that might lead to the business going in the wrong direction.

What are the steps to undertake a SWOT analysis?

The SWOT analysis is comprised of four building blocks:

One thing to notice about the SWOT analysis is how it can be broken down in:

Therefore, while performing a SWOT analysis it’s critical to keep this distinction in mind.

Another element of the SWOT analysis is how those same building blocks can be broken down in controllable and non-controllable:

However, the more as a business you grow or limit the controllable building blocks (strengths and weaknesses) the more you might able to improve your influence over the non-controllable (opportunities and threats).

The classic example if that of Apple who worked hard to improve its brand, by creating new hit products that defined whole new industries thus, creating opportunities that didn’t exist before and by posing new threats to those players who operated according to new rules.

What are the key assets, resources and value propositions that give you a competitive edge and promote substantial growth?

What resources, assets or value propositions are lacking or preventing the growth of the business?

Based on the context, what are some available opportunities that can unlock the growth of the organization?

Based on the context, what threats might jeopardize the business in the future?

Costco is a large American multinational corporation with a focus on low-cost, membership-only retail warehouse clubs. Costco is the 4th largest retail operator in the world, operating 785 warehouses in 10 different countries. Indeed, it has enjoyed rapid success growing from zero to $3 billion in sales within six years.

TOWS Matrix As Alternative To The SWOT Analysis

The four strategy combinations of a TOWS Matrix:

In this quadrant of the TOWS Matrix, a business must assess its strengths on a case by case basis to determine if it can use them to capitalize on opportunities. For example, a car manufacturer operating in a luxury car market (opportunity) with a strong R&D culture (strength) may design a feature-packed line of premium vehicles.

Here, the business should assess each strength based on its ability to counteract or avoid external threats. Returning to the car manufacturer example, unfavorable exchange rates (the threat) may be counteracted by the company using its R&D expertise to build a factory in a country with a better-valued currency.

In the WO quadrant, an organization must determine how its weaknesses can be eliminated or offset by external opportunities. For example, inexperience in dealing with foreign labor unions (weakness) can be overcome by hiring managers with the relevant experience (external opportunity).

In the final strategy combination, the business assesses each weakness and threat and determines if they can be avoided. The car manufacturer with little experience operating in foreign markets (weakness) can avoid entering that market altogether. Another maker with a heavy reliance on a single car model (weakness) can reduce the threat of competition by developing a range of different models.

Create a SWOT diagram with four boxes. Each box represents: