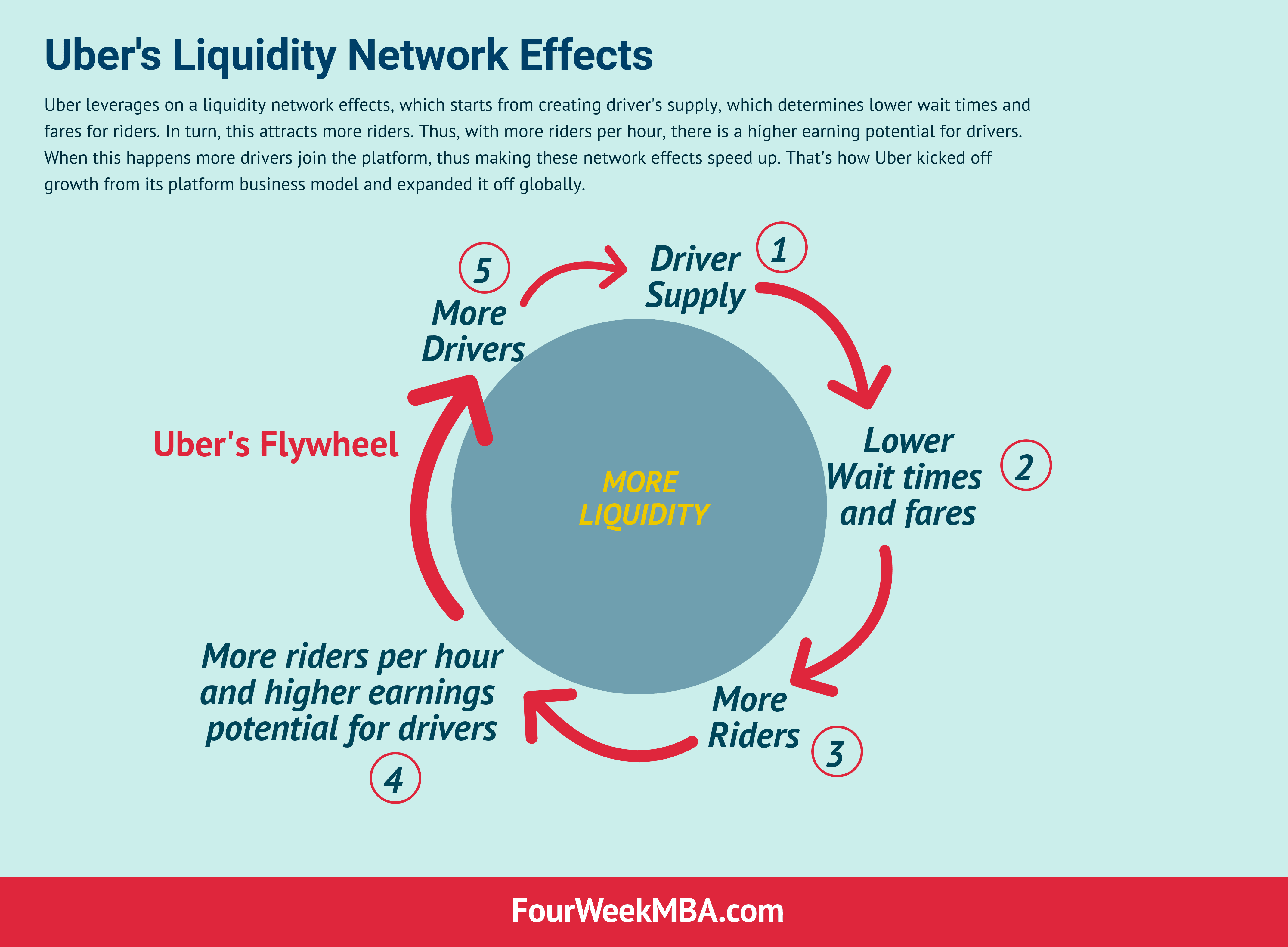 One of the key elements of platform business models is their ability to create strong network effects. One major issue when kicking off a platform from scratch is to create “liquidity.”

As pointed out on Uber Financial Prospectus:

Our network becomes smarter with every trip. In over 700 cities around the world, our network powers movement at the touch of a button for millions, and we hope eventually billions, of people. We have massive network scale and liquidity, with 1.5 billion Trips and an average wait time of five minutes for a rider to be picked up by a Driver in the quarter ended December 31, 2018.

In order to trigger network effects, Uber needs to think in terms of nodes of a graph, rather than just customers. Indeed:

Every node we add to our network increases liquidity, and we intend to continue to add more Drivers, consumers, restaurants, shippers, carriers, and docklesse-bikesand e-scooters.

Looking at the future Uber will be widely investing in other areas as well:

We also hope to add autonomous vehicles, delivery drones, and vertical takeoff and landing vehicles to our network, along with other future innovations.

This means the ability to generate enough supply, which improves the service. Thus it generates even more demand. This flywheel effect is the key to trigger the network effects needed to unlock growth.

Our strategy is to create the largest network in each market so that we can have the greatest liquidity network effect, which we believe leads to a margin advantage.

Thus, Uber looks after liquidity network, which allows it to create a competitive advantage, which over time becomes a margin advantage!

Uber leverages on a liquidity network effects, which starts from creating driver’s supply, which determines lower wait times and fares for riders. In turn, this attracts more riders.

Thus, with more riders per hour, there is a higher earning potential for drivers. When this happens more drivers join the platform, thus making this network effect speed up. That’s how Uber kicks off growth from its platform!

As explained in its financial prospectus:

Increasing scale, creating category leadership and a margin advantage.We can choose to use incentives, such as promotions for Drivers and consumers, to attract platform users on both sides of our network, which can result in a negative margin until we reach sufficient scale to reduce incentives.

Therefore, to focus on growth, Uber kicks off a market by eating up its margins, that become negative, until sufficient scale is reached. At that stage, incentives are reduced. Thus, Uber subsidized a market when it first enters it.

That is also why and how Uber has been able to build up a global presence:

In certain markets, other operators may use incentives to attempt to mitigate the advantages of our more liquid network, and we will generally choose to match these incentives, even if it results in a negative margin, to compete effectively and grow our business.

Uber here clarifies even further how Uber eats up its margins, by making it them negatives, and to prioritize on Growth. This aggressive growth strategy, it’s described by LinkedIn’s founder Reid Hoffman, as Blitzscaling:

In short, Uber prioritizes in making its network larger, so that over-time it can gain higher margins on its operations.

To the extent that competing ridesharing category participants choose to shift their strategy towards shorter-term profitability by reducing their incentives or employing other means of increasing their take rate, we believe that we would not be required to invest as heavily in incentives given the impact of price and Driver earnings on consumer and Driver behavior, respectively.

Therefore, according to Uber, those players that prioritize on “short-term profitability” makes it easier to Uber to be competitive.

In addition to competing against ridesharing category participants, we also expect to continue to use Driver incentives and consumer discounts and promotions to grow our business relative to lower-priced alternatives, such as personal vehicle ownership, and to maintain balance between Driver supply and consumer demand.

That’s why we can expect in the coming years, Uber to keep using this strategy to fuel growth. This isn’t that far from Amazon cash machine strategy, where Amazon voluntarily reduced its margins to prioritize on aggressive growth and acquisition of market shares.

It is important to remark that Amazon has been profitable for many of its years of operations.

This business strategy used by Uber is a clear example of how platform business models can gain long-term competitive advantage by tapping into larger and larger networks!