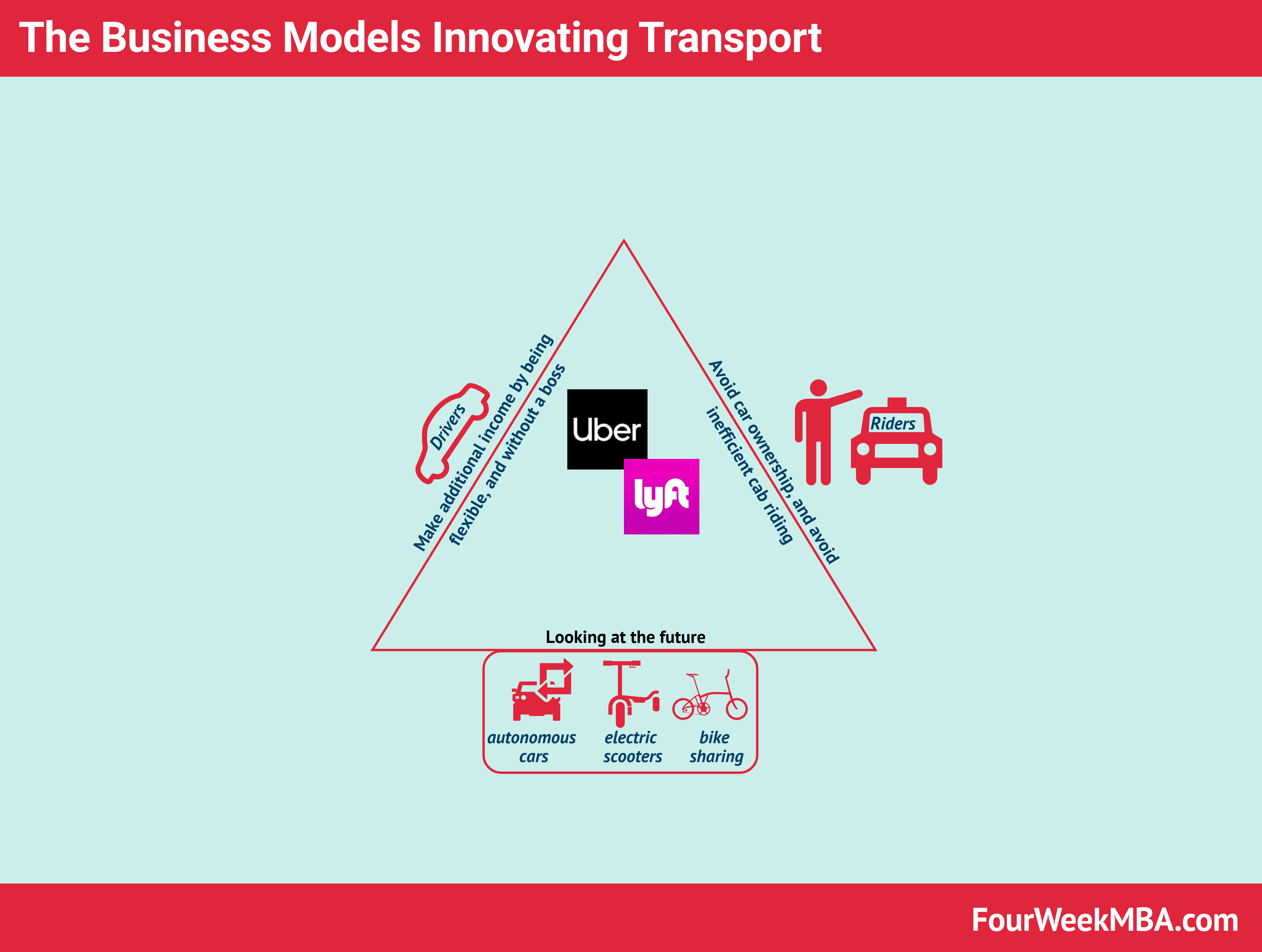 More than a comparison between Uber and Lyft, this is a set of thoughts and observations that might help understand the dynamics of innovative business models taking over established industries.

Indeed, when building up a company, a conventional strategy is to design a business model and roll it up in the business world. Or to assembling it piece by piece by gathering feedback from the market and iterating on it.

In some occasions though, a business model to be successful requires the transformation of the overall society. When that happens, business models need to become the builder of ecosystems rather than just companies. For instance, going back to Uber and Lyft, their business models are trying to change an essential piece of our daily lives: transportation.

Both Uber and Lyft started more like movements than companies. Indeed, they both had an alternative vision compared to traditional transportation systems.

For instance, Uber ultimate goal is about “making it easier to live without owning a personal car. Achieving that goal ultimately means improving urban life by reducing congestion, pollution and the need for parking spaces.”

At the same time, Lyft started as a movement back in 2012, and its mission is to “improve people’s lives with the world’s best transportation.”

While they’re going in the same directions, those companies share different core values. Where Uber values:

They might be using a different wordings to deliver the same message. However, from those core values different cultures form, and these cultures are a critical element to the ability of those companies to scale up.

There is a phrase attributed to Peter Drucker, “culture eats strategy for breakfast.” Whether or not he said it, we can’t know for sure. But I think this phrase raises an important point.

Strategy, in general, might sit on the same table of culture. In some occasions, when you’re rolling out an entirely new business model, that demands societal adjustments, then culture does eat strategy and business modeling for breakfast.

In Uber and Lyft case, their beginning as a sort of movement didn’t spring up from a vacuum, but it was a bottom-up movement that came from the drawbacks caused over the years by mass car ownership. Some of those significant drawbacks are:

Those movements started from large cities, and it’s not by chance that places like San Francisco, Los Angeles, and New York were the places where those services got first rolled out.

That brings us to the next point.

The formation of new macrotrends

Globalization, digitalization, growing urban populations and the growing precarity of jobs all led to the creation of new trends that helped Uber and Lyft enter the transportation market, to grow quickly. Some of those are:

Those macrotrends undoubtedly helped Uber and Lyft to roll out their business models, nonetheless regulation, and protests from existing industries (like the taxi industry). People pushed it for those companies success at a bottom-up level.

That also brings us to another critical point.

While Uber and Lyft, both have two key partners (drivers and riders) their business model success depends on the ability to deal with local communities.

Thus, the overall implementation of this new transportation business model requires the understanding of complex dynamics that help build ecosystems.

Thus, rather than looking internally, it needs to look outside, and while it starts from building a community, it then needs to be able to scale an entire ecosystem!

It is interesting to notice how the emergence of players like Uber and Lyft are also allowing the growth of complementary industries. For instance, Hyrecar is a peer-to-peer marketplace where owners of a car can rent their idle vehicles to drivers that want instead make an additional income by driving for Uber or Lyft.

By providing a platform that makes it easy for car owners and drivers to connect, Hyrecar is building a new business from scratch.

Why is this happening? Platforms aren’t an easy game, and Uber and Lyft have come up with clever strategies over the years, mainly to keep drivers going back to the platform.

Indeed, of the two key players (drivers and riders), probably the most important for them, to generate network effects are drivers. If as a rider I get on the app, but there is no rider around, or my wait time is too long I might well switch to another service or transportation mode altogether.

For that matter, both Uber and Lyft use a dynamic pricing strategy:

Where Uber and Lyft are successful in attracting a broader number of drivers, companies like Hyrecar benefit from those network effects.

Uber and Lyft aren’t just companies; those are platforms. A platform at its core is a place that connects people and groups and makes their interactions as smooth as possible.

As a result of allowing those interactions platforms to collect fees, which dynamics is not different from that of paying taxes in the long-run.

That’s also why Uber and Lyft are not in the business of owning cars. They allow connections that spur marketplaces. From those marketplaces, they extract economic value in forms of fees.

In the last two decades, the web has allowed many platforms to be formed, Uber and Lyft are no exception.

Transportation as a service

Another radical change that is going through is a broader transition from ownership to possession or use. In short, in many industries, including software (with the rise of SaaS business models) companies are transitioning from offering products or one-time services to ongoing services that can be benefited via a subscription plan.

For instance, Lyft introduced subscription fees to the access of the network of shared bikes and scooters on the platform or to get access to special promotions.

As pointed out on Lyft blog with a subscription fee you can get an interesting transportation package:

Many companies are trying to make the switch from product-centered to customer-centered, which implies a transition from single sales touch points to a continuous stream of services and recommendation for paying subscribers.

Would this trend pick up, then it might become easier also for other businesses like Lyft to implement and improve their subscription offerings.

New industries can be built on top of older and already existing ones. In the case of mass car ownership, more and more people have opted for a model where they don’t own a car anymore. This transition is part of a more profound movement, started almost a decade ago, and that is still ongoing.

For that matter, companies like Uber and Lyft transition from platforms to ecosystem builders. Only when that process is completed, the business model will turn out to be successful, and the bottom line might be finally looking good!

How To Turn Your Business Into A Worker Cooperative

Many business organizations in the United States are worker cooperatives. Owners of these organizations sold them to their employees. The...