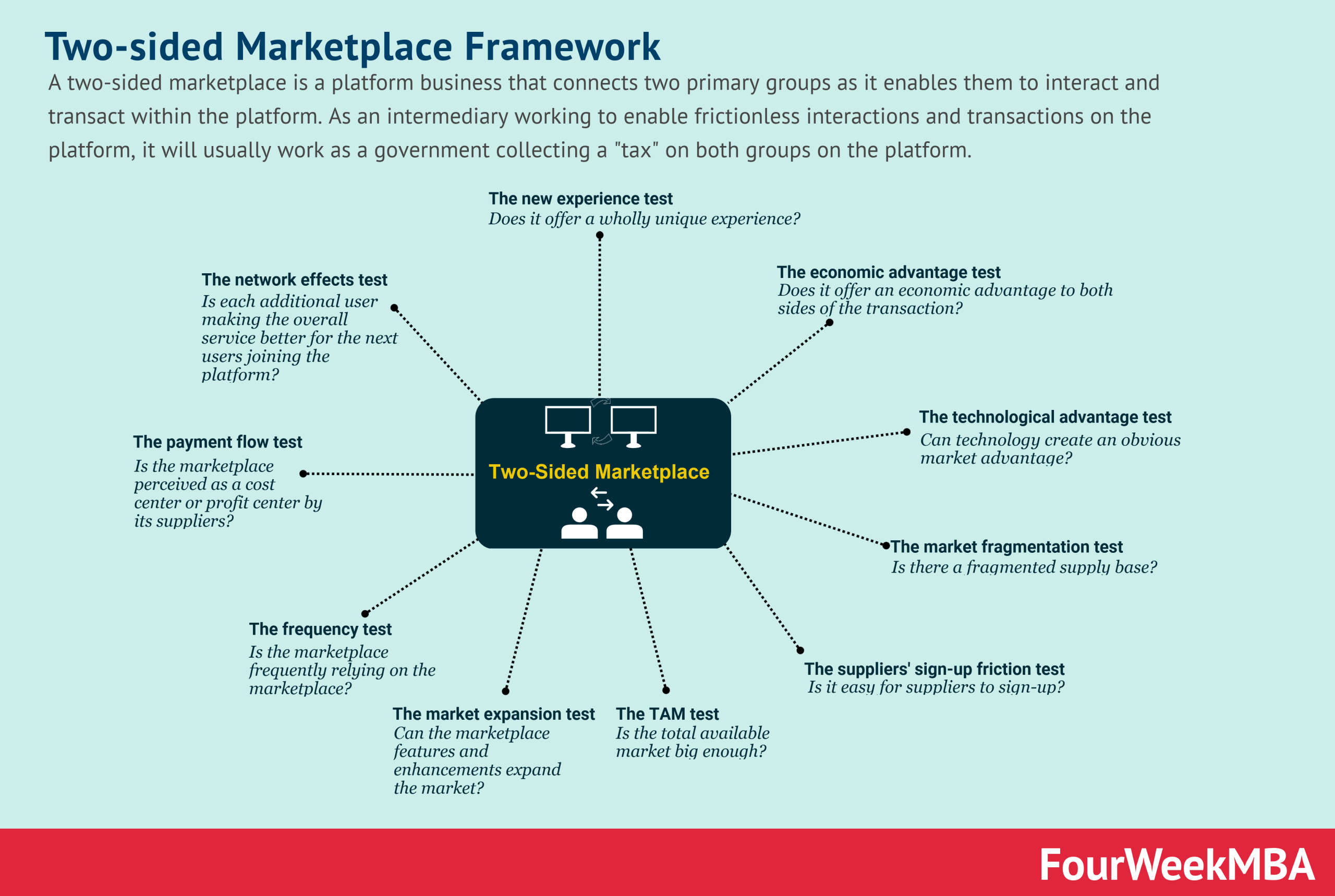 A two-sided marketplace is a platform business that connects two primary groups as it enables them to interact and transact within the platform. As an intermediary working to enable frictionless interactions and transactions on the platform, it will usually work as a government collecting a “tax” on both groups on the platform.

A quick intro to two-sided marketplaces

In an essay entitled “All Markets Are Not Created Equal: 10 Factors To Consider When Evaluating Digital Marketplaces” Bill Gurley, general partner at Benchmark and early investor in Uber pointed out:

A true marketplace needs natural pull on both the consumer and supplier side of the market. Aggregating suppliers is a necessary, but insufficient step on its own. You must also organically aggregate demand. With each step, it should get easier to acquire the incremental consumer AS WELL AS the incremental supplier. Highly liquid marketplaces naturally “tip” towards becoming a clearinghouse where neither the consumer nor the supplier would favor an alternative. That only happens if your momentum is increasing, and both consumers and suppliers are sensing an increasing importance of your place in the world. Much easier said than done.

For that matter, he identified ten key factors to take into account when building up a two-sided marketplace. You find them listed below:

Does it offer a wholly unique experience?

For this matter, it is critical that the two-sided marketplace offers a new experience compared to the established companies operating in a particular industry and marketplace.

As Bill Gurley points out, you need to create that “wow” moment that makes your platform unique. GrubHub business model is an example of that kind of experience.

Does it offer an economic advantage to both sides of the transaction?

When Airbnb disrupted the hospitality industry, it did so by creating an economic advantage for its both key partners: hosts and guests. Hosts could make additional income out of the platform.

Additional income which just wasn’t there before, as it was way harder for a host to start renting a room just like a hotel would do. On the other hand, guests could benefit from better experiences and prices.

Airbnb business model is a perfect example of the economic advantage created compared to traditional players.

In this respect, technology must be a key ingredient for the marketplace success.

Industries where there is a complete lack of transparency in prices and availability of data, technology can play a crucial role in making those processes available and visible.

One example that I like in this case is Google AdWords (now called Google Ads). organization">Google took a market like advertising based on massive budgets managed by accounts, with a lack of transparency and trackability of actual results from those ad campaigns.

organization">Google transformed it into a giant marketplace. In this marketplace, businesses bid on a keyword where they know exactly the price and clicks they will get from those campaigns.

Another critical element of the Google business model was the introduction of paid ads also based on relevance when technology creates this kind of advantage that is when network effects are triggered.

Is there a fragmented supply base?

In this case, if there is a fragmented supply, this means a higher chance of succeeding for a marketplace.

When launching a two-sided marketplace the chicken or the egg problem can be tackled by creating first enough supply to make the platform compelling enough for the demand side.

However, the process of acquiring suppliers needs to be frictionless. For instance, in some marketplace that might require a substantial local presence or multiple touchpoints with suppliers, this might slow down the process of aggregating supply.

When building up a marketplace understanding what’s the potential of it starts from looking at its TAM or total available market. Indeed, not only a small TAM might reduce the likelihood of success of the marketplace.

It might also make it less compelling to investors. As pointed out in Blitzscaling by Reed Hoffman, investors want to see a TAM of billions of dollars.

Can the marketplace features and enhancements expand the market?

When a marketplace becomes widely adopted, its features and enhancements can expand market opportunities for entire industries.

For instance, Airbnb trying to design the whole experience of its users, from the arrival to end of the trip (thus not just the stay) has expanded the entire set of services offered within the same industry.

Booking a ride on Uber is a utility. Something that people might deal with so often that allows network effects and word-of-mouth easily.

Indeed, one of the reasons a marketplace might lose traction and thus might struggle to gain enough brand awareness is due to infrequent transactions.

Is the marketplace perceived as a cost center or profit center by its suppliers?

According to the way the payment flow is designed it is easy to be perceived as a cost center rather than a profit center by the suppliers on the marketplace.

For instance, in the case in which the supplier gains revenues net of fee right away from the platform, this means that the marketplace is itself a critical element for the supplier bottom line.

In the opposite scenario, the marketplace might be perceived as a cost center, which makes it less appealing in the long run.

Is each additional user making the overall service better for the next users joining the platform?

Network effects are a vital ingredient for any company’s success; this applies even more to marketplaces.

Network effects usually happen when each additional user makes the platform better for those joining next.

Did your marketplace pass all the tests?