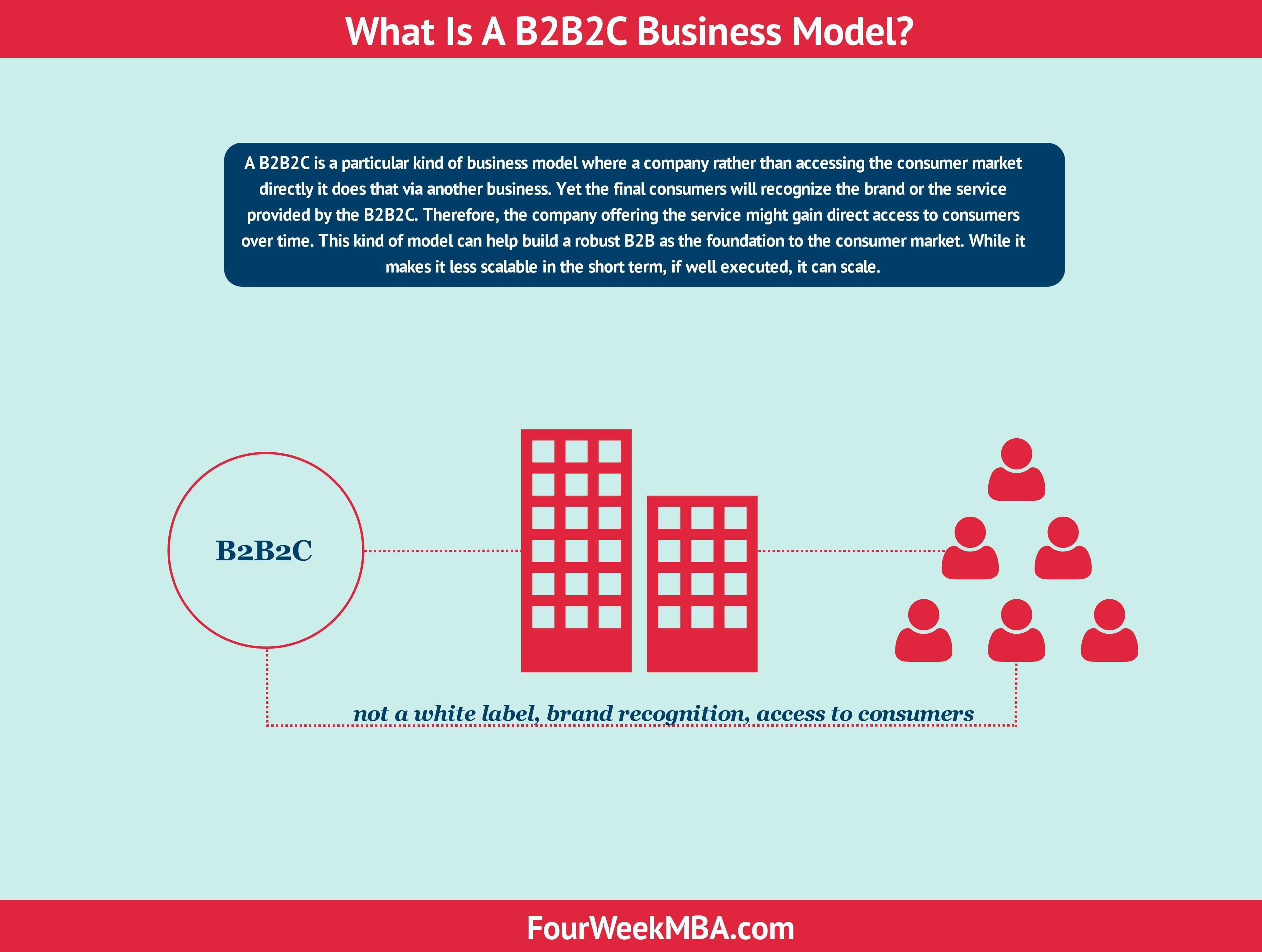 A B2B2C is a particular kind of business model where a company, rather than accessing the consumer market directly, it does that via another business. Yet the final consumers will recognize the brand or the service provided by the B2B2C. The company offering the service might gain direct access to consumers over time.

B2B2C in a nutshell

In the business world, the difference between B2B vs. B2C businesses often seems clear and straightforward. However, there is a third kind of business model, primarily based on what might seem like a B2B strategy. However, the final aim is to build a B2C company over time.

That second business will allow the first business to gain access to its consumers, have its brand recognized, and over time expands the overall consumer base.

Now the question is why an intermediary business would become the link with its consumers for the B2B2C business?

Did you know Google was a B2B2C?

One of the deals that made Google the tech giant it is today was the deal with AOL. At the time AOL was a tech giant, while Google was still in its infancy.

While the search engine from Mountain View was snowballing, it still missed the first-scaler advantage that would have given it the dominance of the search industry.

Google was already a consumer product. However, it needed to pass first through a set of bottlenecks to gain access to consumers. In addition, the more data Google gained over time, the more it got better.

And the more consumers knew about it; the more Google would be less reliant on distribution channels like AOL. This is not to say that Google took advantage of AOL.

Quite the opposite, Google offered to AOL a minimum guaranteed of revenues, and it bought a stake into the company.

Indeed, a B2B2C business model relies on a closely tied relationship which makes the intermediary business (which connects to end consumers) position quite good.

Let’s analyze the basis of this B2B relationship, which will then trigger the B2C opportunities. For the sake of this discussion we’ll call:

Why not go directly to consumers?

One of the first questions that come to mind in designing this kind of business model might be about why not going directly after the consumers?

In reality, going after the consumers is the dream of many, but a few make it. The consumer market seems to be biased more than any other toward the winner-take-all effect.

In a study by Sapphire Ventures on the exits in the consumer vs. enterprise since 1995, the latter seems to have generated  $825B compared to $582B in the tech consumer space.

An exit is a strategy where the venture capitalist or investor liquidates its funds in a previously invested startup, and it usually measures the ROI for the investor.

A little caveat: the numbers above are in no way to be interpreted as investment advice, instead this is just a strategic analysis of the business landscape.

This means that starting from a B2B, an enterprise business allows at least three advantages:

One drawback, of course,e is the lack of scalability, unless you design a B2B2C business model.

A B2B2C business model relies on a tight relationship between the B1 that wants to access consumers and B2, which instead has already access to the consumer market.

As it might not make sense for B1 to enter the consumer market, it will make sense to find the key players that can help it open it.

A partnership between B1 and B2 has – I argue – three main features:

What are the premises of a B2B2C relationship?

A B2B2C business starts with a few key partners, which are other businesses that can help it gain access to consumers. This relationship has to be highly beneficial to the business that has access to the consumer market.

It might look like a joint venture in practice, with a tight-knit that makes the incentives in favor of the business partner to distribute the product of the other business which doesn’t have access to consumers.

Indeed, I argue – this kind of partnership has to have a few key elements:

In order for the B2B2C business model to work, you’ll need to have a sort of barbel marketing strategy.

On the one hand, you want to have a structured sales force able to perform account management for those businesses acting as intermediaries to the consumer market.

On the other hand, you need to invest resources in branding and marketing efforts. This will allow your business to be recognized by consumers over time. In this way, consumers will act as a push that will make your entrance into the B2B space easier.

While this process might seem simple in theory, it is quite complex in practice. But in this article, we analyzed a few key ingredients, which should give you enough information to get started.

What is the difference between B2B B2C and B2B2C?

In a B2B2B model, a company will target employees within the desired organization, as an alternative to existing products. In some cases, the basic service is offered for free, so that those corporates within the desired business will promote the service within the company. Think of how Slack offers a free basic version that can be upgraded for morse users. In this case, Slack provides a valid alternative to the internal company’s chats.
View more on FourWeekMBA

What is a B2C example?

In a B2C model, a business deals with consumers. Examples of B2C include companies like Apple and Amazon, which usually sell to consumers. The B2C model offers a product or service which is wired toward a broader market compared to B2B, and it has different structure and characteristics.
View more on FourWeekMBA

What is a B2B example?

In a B2C model, a business deals with other companies. Examples of B2B include companies like Salesforce and Dropbox, which usually sell to other businesses. The B2B model offers a product or service which is wired toward a smaller set of customers compared to B2B which has different features.
View more on FourWeekMBA

What Is Bounded Rationality And Why It Matters

Bounded rationality is a concept attributed to Herbert Simon, an economist and political scientist interested in decision-making and how we...