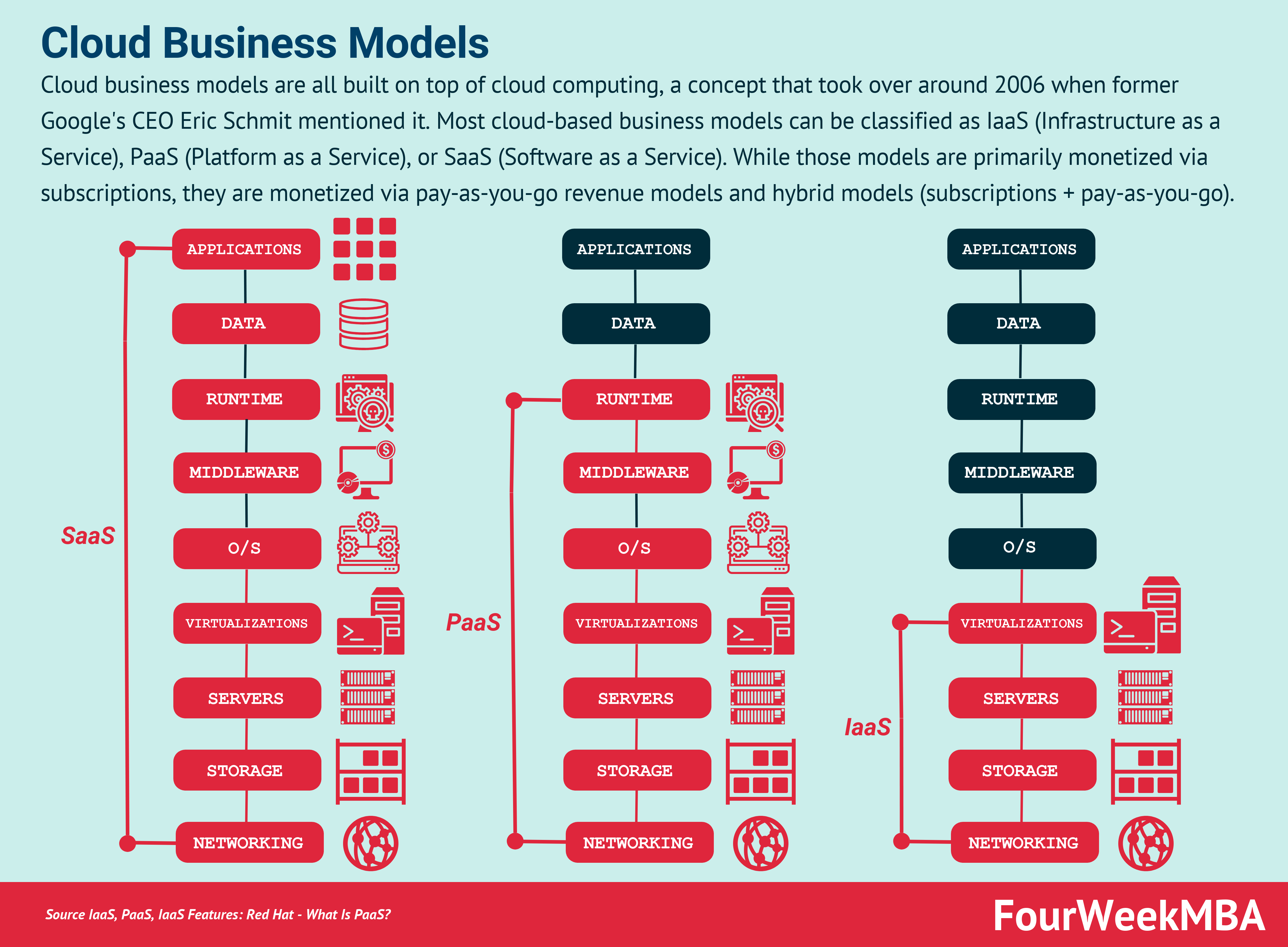 Cloud business models are all built on top of cloud computing, a concept that took over around 2006 when former Google’s CEO Eric Schmit mentioned it. Most cloud-based business models can be classified as IaaS (Infrastructure as a Service), PaaS (Platform as a Service), or SaaS (Software as a Service). While those models are primarily monetized via subscriptions, they are monetized via pay-as-you-go revenue models and hybrid models (subscriptions + pay-as-you-go).

Back in August 2006, at Search Engine Strategies Conference, in a conversation with Eric Schmidt hosted by Danny Sullivan, the former Google’s CEO pointed out,

What’s interesting [now] is that there is an emergent new model, and you all are here because you are part of that new model. I don’t think people have really understood how big this opportunity really is. It starts with the premise that the data services and architecture should be on servers. We call it cloud computing – they should be in a “cloud” somewhere. And that if you have the right kind of browser or the right kind of access, it doesn’t matter whether you have a PC or a Mac or a mobile phone or a BlackBerry or what have you – or new devices still to be developed – you can get access to the cloud. There are a number of companies that have benefited from that. Obviously, Google, Yahoo!, eBay, Amazon come to mind. The computation and the data and so forth are in the servers.

And so what’s interesting is that the two – “cloud computing and advertising – go hand-in-hand. There is a new business model that’s funding all of the software innovation to allow people to have platform choice, client choice, data architectures that are interesting, solutions that are new – and that’s being driven by advertising. The reason that I said “don’t bet against the Internet” is an awful lot of people are still trying to do stuff the old way. They’re still trying to build proprietary protocols, they’re still trying to not build standardized protocols. They’re still not trying to solve problems in a simple and extensible way. But when somebody does it right – let me give you the example of mashups, which are taking over the world by storm. It happens very fast. And that’s the power of the Internet.

While the term picked up traction from there, even though the term and potential of this technology were already understood in 1996, when a group of executives at Compaq already had forgone that most applications on the web of what they called “cloud computing-enabled applications.”

Even though, as we saw above, it would still take ten years, for this technology to pick up at scale. And by 2020, cloud computing would become one of the most profirable industries, and units of tech giants like Amazon (with AWS) Microsoft (with Azure), Google (with its Cloud), and IBM.

Not only that, cloud computing enabled the birth of an entrepreneurial ecosystem, and hundreds of companies, both in B2B and B2C that leveraged the cloud to build valuable products and services.

Consumers’ companies like Netflix, Spotify, YouTube are all built upon the cloud. Other enterprise-based organizations as well.

Depending on the type of cloud-based business model, the company might have a complex or less technological infrastructure or platform. Perhaps, a SaaS service might well be built on top of existing IaaS and PaaS. Therefore, only do the part related to the UI and UX development for final users/customers.

Other cloud-based infrastructures can be extremely complex. Companies like Amazon AWS, Google Cloud, Microsoft Azure, and IBM Cloud (which are the major players) took years to develop and enabled an entrepreneurial ecosystem of companies built on top of them. A whole set of SaaS companies are built on top of those cloud providers.

While business models built on top of the cloud are usually driven by a subscription (as they run as an on-demand service), in reality there are several revenue streams used: