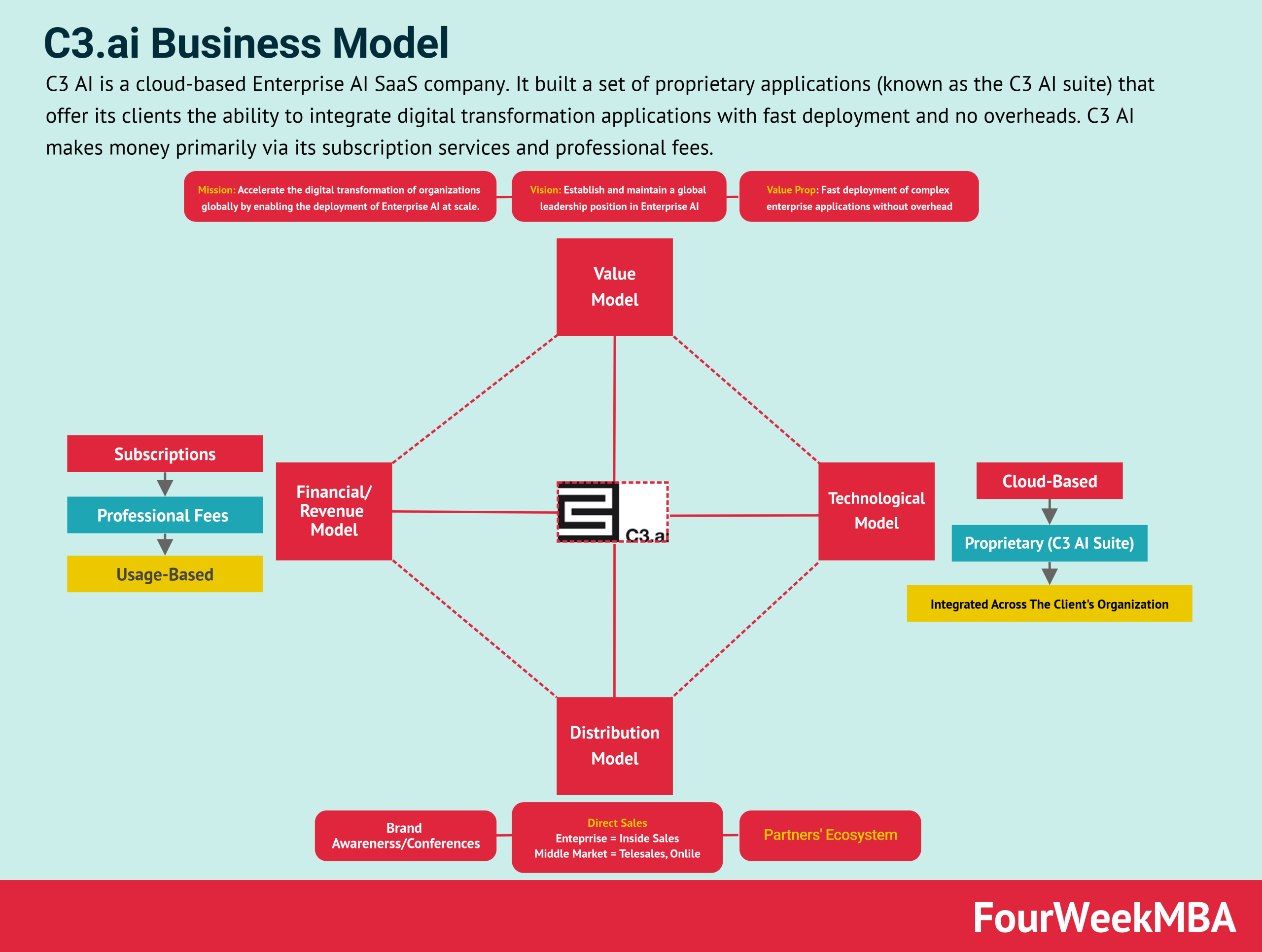 C3 AI is a cloud-based Enterprise AI SaaS company. It built a set of proprietary applications (known as the C3 AI suite) that offer its clients the ability to integrate digital transformation applications with fast deployment and no overheads. C3 AI makes money primarily via its subscription services and professional fees.

The framework used to analyze the C3 AI business model

The VTDF framework is the basis to analyze the C3.ai business model.

Thomas M. Siebel, Founder and CEO of C3.ai explained in its letter to investors:

This is my fourth decade in the information technology industry. After completing my graduate work in Computer Science, specifically relational database theory, I was recruited to the then start-up Oracle. The relational database market was nascent when I joined Larry Ellison and Bob Miner at Oracle in 1983. The global market for information technology was $224 billion, and, as I recall, the RDBMS market was less than $20 million. I was satisfied that the fundamental economics of application development and information processing assured the ascendance of RDBMS. That turned out to be a pretty good bet. A decade later, Oracle grew to exceed $1 billion in revenue.

After this transition as the IT market exploded to half a trillion industry, during the 1990s, Thomas M. Siebel pointed out how many business processes had been automated, and yet this wans’t the case yet for sales and marketing processes, whcih throghout the IT revolutuon hat remained almost untouched.

From there Siebel founded the company that brought his name, Siebel Systems. In 1993, this software company focus was to apply IT innovation to improve business processes related to sales, marketing and customer service.

After six years, Siebel Systems passed $2 billion in revenues, and it got sold by 2006 to Oracle. What Siebel Systems was after at the time is what would be known as the CRM market, where players like Salesforce, throughout the 2010s, became leaders in the industry, SaaS, that has now become ubiquitous in terms of applications and commercial use cases.

The next bet for Thomas M. Siebel became Elastic Cloud, an evolution of cloud computing, able to adapt to the demand of the customer/user so that a whole infrastructure (IaaS), platform (PaaS), or application (SaaS), could adapt to the need of the company, now able to convert Capex in Opex, with faster deployment, experimentation and continuous improvements.

This is at the basis of IaaS, PaaS, SaaS and Cloud Business Models.

Cloud computing isn’t just important because it changes the operating model for companies benefiting from that, but also because it ebnables the development of a whole new AI ecosystem, made of companies building applications with AI/ML capabilities.

This is the bet of Enterprise AI driving digital transformation, which is where C3.ai is positioned.