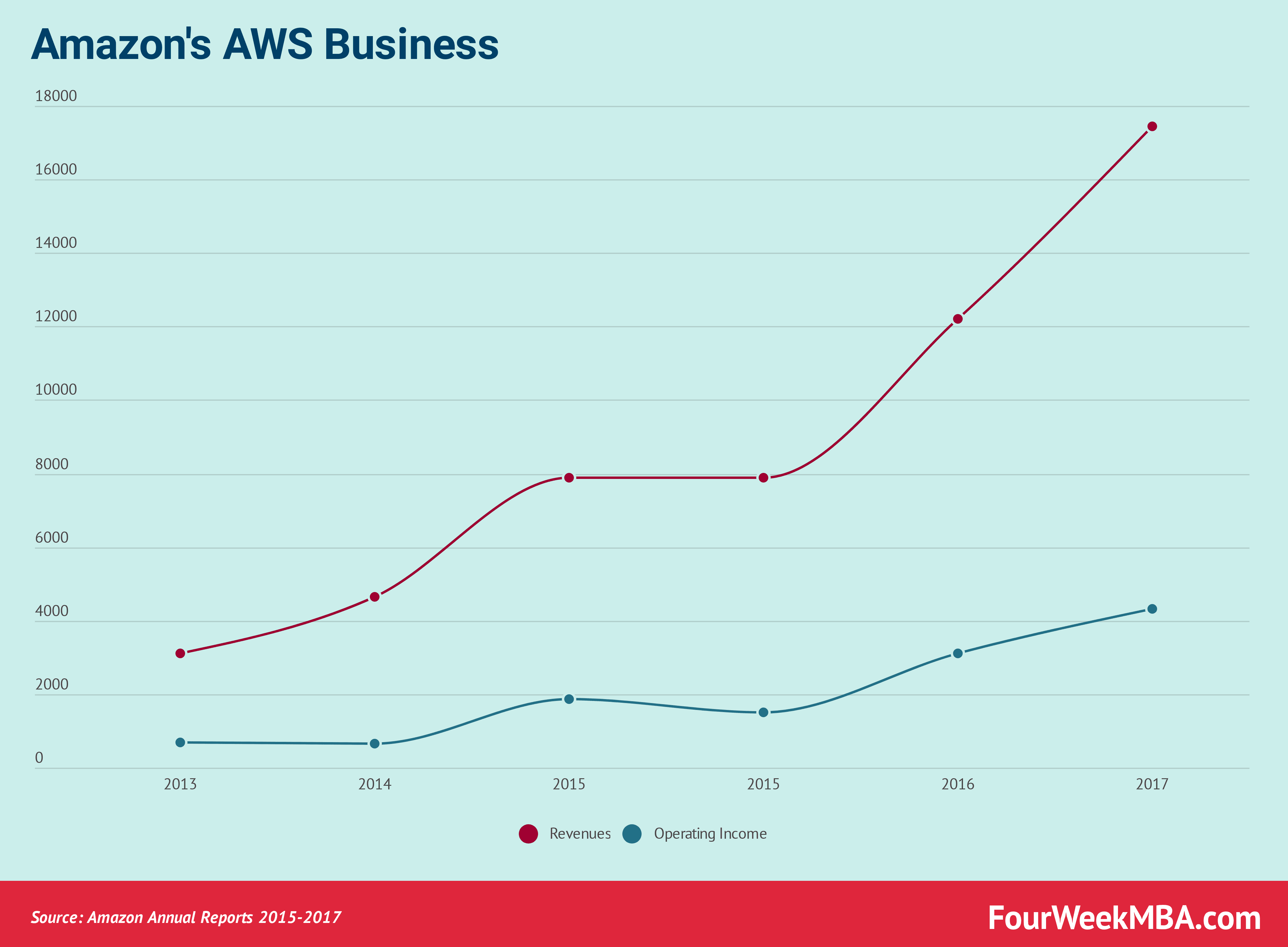 Amazon AWS follows a platform business model, that gains traction by tapping into network effects. Born as an infrastructure built on top of Amazon‘s infrastructure, AWS has become a company offering cloud services to thousands of clients from the enterprise level, to startups. And its marketplace enables companies to connect to other service providers to build integrated solutions for their organizations.

I want to highlight the importance of AWS in the overall Amazon business model and how it has changed over the years.

The importance of AWS on the overall Amazon business model

As I pointed out in this article, “back in 2000, Amazon was trying to figure out a way to allow other stores to build their e-commerce on top of Amazon. That is why the Amazon team came up with an e-commerce service at the time called Merchant.com. However, they soon realized that it was impossible to do that on the existing Amazon‘s infrastructure.”

That’s how Amazon AWS came to be. From that attempt to scale up Merchant.com infrastructure, the company managed to build instead an infrastructure that powers up an ecosystem of small and medium businesses.

Today Amazon AWS, although a separate unit within Amazon, is a crucial contributor to the company’s overall profitability, as pointed out in the infographic below:

In this article, I want to point out three key elements of the Amazon AWS business model:

The marginality of an ecosystem that sustains SMEs

When you first look at AWS margins; the first thing you notice is how a company built on top of another platform (Amazon) has incredible margins.

Indeed, when you look at the growth of the margins for AWS, you realize how what was once an infrastructure, it has become a company and a platform business in its own sake.

That was possible, thanks to the scalability, implicit to its model.

Once built the infrastructure, the rest is about network effects. Amazon knows this well, as it engineered its flywheel or virtuous cycle to scale the company to monopoly proportions:

The company is applying its expertise in building up ecosystems on top of Amazon business model to build an entrepreneurial ecosystem that powers up the IT of countless numbers of companies.

It’s about the ecosystem

It’s important to highlight that when a company scales to the proportion of Amazon, it moves away from the traditional business model, toward the platform business model.

A platform business model follows a set of logics, which are relatively new, compared to traditional organizations. Where traditional companies of the past built value on top of a value chain, made of verticalizing its supply chain (take the Luxottica case), to gain as much control as possible on the means of productions, a platform business model aims at creating network effects.

Thus, the more it enables its key stakeholders (drivers – riders in Uber’s case, buyers and sellers in Amazon’s case, hosts and guests in Airbnb’s case and so forth) to connect, and transact in a frictionless manner the more those repeated interactions and transactions drive up network effects.

To make sure a network effect implies that a platform becomes more and more valuable, the more users join in. Thus, an additional user doesn’t become more expensive for the platform business, instead, it makes the service more valuable for others joining in later, and it lowers up transactions cost associated with the platform. Therefore, it becomes cheaper and better.

Amazon AWS in particular powers up thousands of businesses, from small to enterprise, both in private and public sector:

For instance, on Amazon AWS site the company points out how “Expedia is all in on AWS, with plans to migrate 80 percent of its mission-critical apps from its on-premises data centers to the cloud in the next two to three years.”

Or how decacorn startups, like Airbnb “decided to migrate nearly all of its cloud computing functions to Amazon Web Services,” and as its CTO and co-founder pointed out the trigger was the “ease of managing and customizing the stack. It was great to be able to ramp up more servers without having to contact anyone and without having minimum usage commitments.”

As Amazon AWS becomes the infrastructure for thousands of startups and SaaS companies, it shares its distribution capability by integrating other services providers to enable other companies to benefit from solutions that go well beyond the cloud. Thus looking at AWS just as a cloud service, that is limited as it has become way more than that:

Thus, the AWS marketplace becomes a provider of other companies’ services and products on top of its cloud infrastructure. That enables its platform to scale further by creating a market that didn’t exist before while scaling it up altogether!