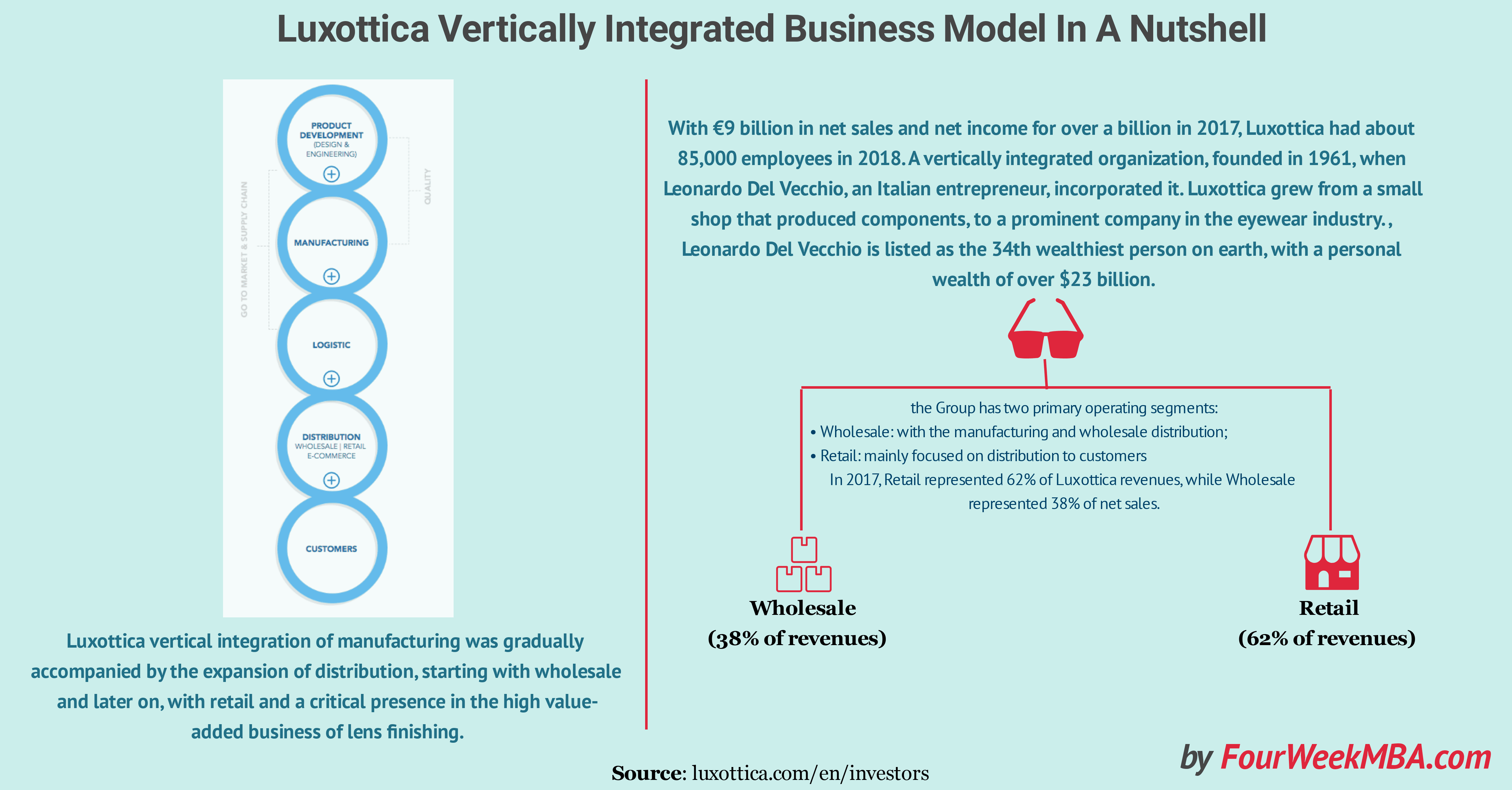 With €9 billion in net sales and net income for over a billion in 2017, Luxottica had about 85,000 employees in 2018. A vertically integrated organization, founded in 1961, when Leonardo Del Vecchio, an Italian entrepreneur, incorporated it. Luxottica grew from a small shop that produced components, to a prominent company in the eyewear industry. , Leonardo Del Vecchio is listed as the 34th wealthiest person on earth, with a personal wealth of over $23 billion.

It all started in 1961, when Leonardo Del Vecchio, an Italian entrepreneur, incorporated Luxottica. Luxottica didn’t begin with great ambitions. It was a small shop that produced components and semi-finished products for the optical industry.

Yet by the 1970s Luxottica had become an integrated manufacturer able to produce the finished pair of glasses. The transition between contract manufacturer to a producer can be traced to 1971 when Luxottica first collection was presented in Milan.

It was starting in 1974 that the company started a strategy of vertical integration. In short, Luxottica has begun to control the whole supply chain. First, by distributing frames directly to retailers.

Then, in the 1980s Luxottica started the international expansion by acquiring independent distributors. As eyewear became more and more, a fashion object brought Luxottica to acquire Sferoflex, which allowed the company to improve the design of its products, thus enhanced its brand.

The growth of Luxottica as a brand has walked hand in hand with its commercial expansion. In fact, in 1988 Luxottica entered in a licensing agreement with Giorgio Armani. It then continued those licensing agreements with famous luxury brands, like Bulgari, Chanel, Prada and many others.

Luxottica also kept acquiring other brands, comprising Oakey (the California-based eyewear company), which of the time of the acquisition had over 160 stores. To strengthen its vertically integrated business, Luxottica also acquired several chains Sunglass Hut (2001), OPSM Group (2003), and Cole National (2004).

In 2016, Luxottica completed the acquisition of Salmoiraghi & Viganò, in which it has held a minority stake since 2012.

At the time of this writing, Leonardo Del Vecchio is listed as the 34th wealthiest person on earth, after Michael Dell, with a personal wealth of over $23 billion.

With €9 billion in net sales and net income for over a billion, Luxottica had about 85,000 employees in 2018. A vertically integrated organization with a wide wholesale organization and a retail network located primarily in four regions:

The vertical integration of Luxottica hasn’t happened overnight. Instead, it represented the fulfilling of a vision from its founder, Leonardo Del Vecchio. As he started to produce entire frames, rather than just components.

Thus, vertical integration of manufacturing was gradually accompanied by the expansion of distribution, starting with wholesale and later on, with retail and a critical presence in the high value-added business of lens ﬁnishing.

One of the critical aspects of vertical integration is the ability of the company executing it to control the quality of each step of the supply chain. Thus, have total control over the final offering, pricing, and product development.

Those high standards is what Luxottica calls “Made in Luxottica” standard. One of the issues of a fragmented supply chain is the inability to truly understand customers, especially if the company is not controlling the retail side of its distribution.

On the other hand, if a company is too focused on the retail side, it might be tough to lower the cost of its materials, while keeping its quality pretty high.

Instead, a vertically integrated business model allows keeping control of all the aspects, from product development to retail. This, in turn, also makes Luxottica aware of all its elements, by forming a 360 degrees view of its business.

• Wholesale: with the manufacturing and wholesale distribution;

In 2017, Retail represented 62% of Luxottica revenues, while Wholesale represented 38% of net sales. If we look at the geographical areas, the central regions are:

With its manufacturing and distribution strategy Luxottica has managed to dominate several regions: